A pulsating cup-tie saw the Holy Blues lead twice, only to be pegged back by two penalties in Oxfordshire, the second a hotly contested decision deep into stoppage time, that forced this tie to a replay back at the Martin & Co Arena on Tuesday evening. Kick off at 19:45. Liam King restored Joe and Jamie Green to the starting line up for this one, coming in to replace Callum Fielding between the sticks and Thomas Davie at left back, as the Holy Blues also welcomed Nathan Stainfield back into the starting line up.

Ross Hannah dropped to the bench too as King opted for the pace of Curtis Morrison alongside Ashley Worsfold in attack, with Trinity reverting to their more familiar 5-3-2 formation. But it was Jaanai Gordon who was first to get a shot away in the opening exchanges, following a break in play due to an early injury to Connor Roberts, Banbury went direct, Gordon blasting a couple of yards over the bar from twenty yards. And it was The Puritains who had more of the ball in the opening stages, but with the Trinity attack putting Banbury under pressure, it looked as though there would be opportunities that would present as the game went on.

Curtis Morrison gambled well on an Ashley Worsfold flick on, but the forward’s left foot effort flashed a yard wide of Jack Harding’s goal Ricky Johnson worked hard to hold the ball up for Banbury, as did his strike partner Gordon, with the two combining to release Roger Ngaah, but the attacking threat was snuffed out, Joe Green quickly out of his goal to clear the ball into touch, averting the danger with some decisive play.

Ngaah & Johnson combined down the Banbury right to release Charlie Hawtn, but Stainfield was in the right place to divert a dangerous ball into the box away for a throw in on the far side, as Trinity looked to deal with the home side’s threat. Quick on the restart, Banbury served the Holy Blue 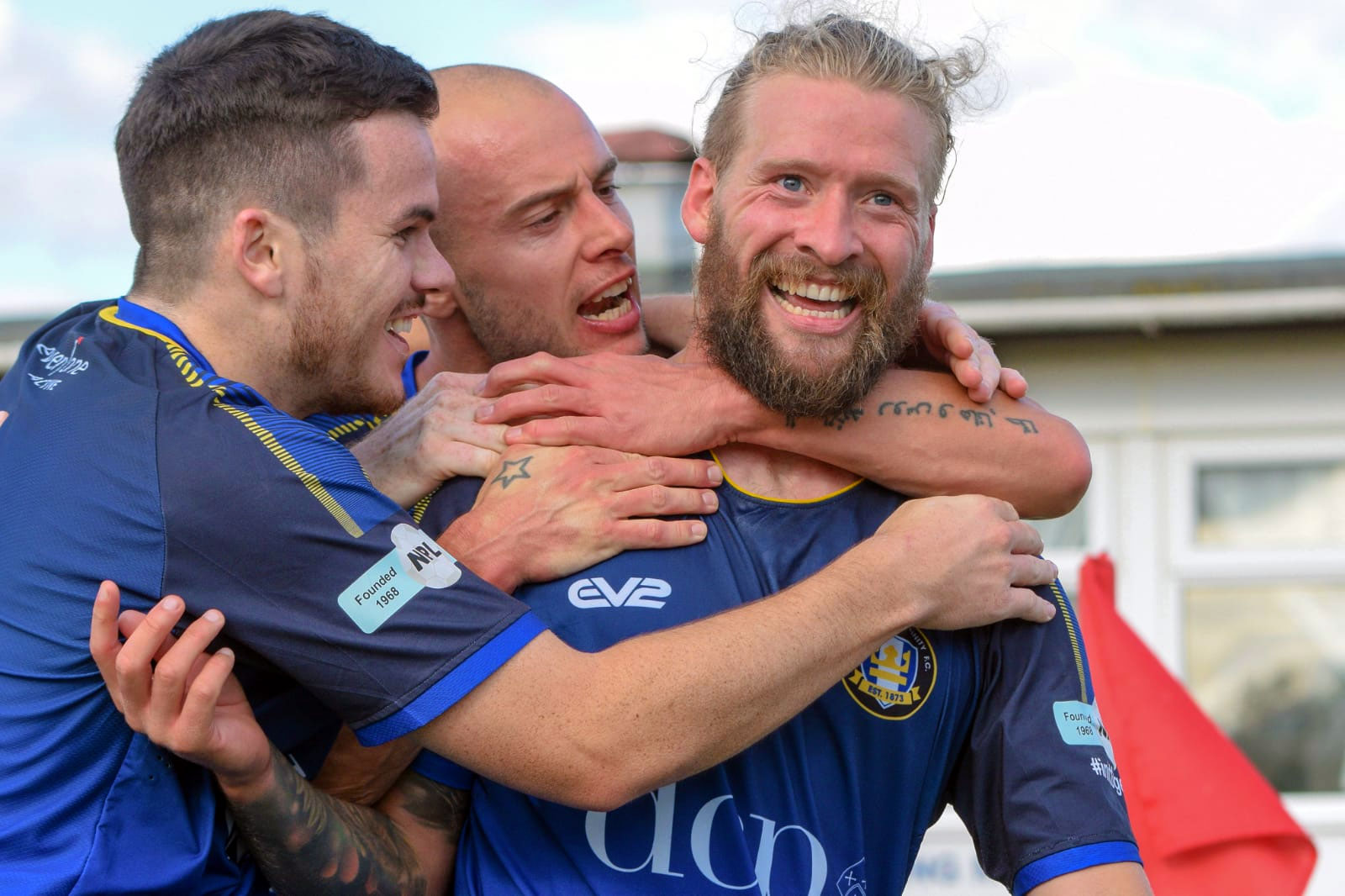 s a warning, when a silly free kick was given away, with the Gainsborough defence caught napping, Hawtin whipped across the face of the penalty area. But this time for Trinity, no Banbury man was on the same wavelength as the attacking right back.

Jamie Green combined well with Harry Middleton down the Gainsborough left, with Green picking out wing back partner Sam Topliss in the middle. Topliss didn’t make the best contact eight yards from goal, but his effort looped up, off team mate Morrison, and threatened to deceive he home custodian. Harding doing well to acrobatically tip the ball over the bar for a corner.

The willing running of Curtis Morrison was causing Banbury problems, and as the front flyer looked to latch onto a Stainfield stab forward, Roberts was caught the wrong side and got tangled up with Morrison. The referee having little hesitation in pointing to the spot. Ashley Worsfold stepping up to despatch past Harding and give Trinity the advantage.

Roberts was too strong for Worsfold on halfway, allowing Claudio Diaz the freedom to drive forward, despite his effort being straight at Joe Green, it took a nasty bounce a yard in front of the Trinity custodian, Green with everything behind it.

A three man move, involving Middleton, James and Morrison saw Middleton open up his body to steer an effort on goal, but it was comfortable for Harding, Harry’s effort lacking any real power from the edge of the box. Half time Banbury United 0 Gainsborough Trinity 1.

The home side came out in the second period with renewed vigour, but Curtis Morrison could have doubled Trinity’s advantage, Sam Topliss’ throw in was helped on by Kingsley James, Morrison doing brilliantly to role Lee Henderson, but as Morrison looked to pull the trigger, he could only find the side netting. Simon Russell then almost profited from more Morrison perseverance, but as Russell looked to pull the trigger, a lunging challenge put off Scholesy and his effort from the edge of the box was wayward.

The Holy Blues struggled to clear Henderson’s hopeful ball into the box, and with penalty box pinball ensuing, an acrobatic effort from Roger Ngaar crashed against Joe Green’s left hand upright. Wizardry on the wing from Curtis Morrison presented a chance on a plate for Ross Hannah, who turned home. His and Trinity’s joy was short lived though, the Assistant Referee’s flag up early to spoil the party for the Blues. Popping up, out on the right this time, Morrison robbed Henderson and raced goal-wards, but as he took too long to pull the trigger, the Banbury man got back to get a block in and deny Curtis a goal his performance deserved.

United did make Trinity pay for not extending the lead, when a free-kick on halfway was quickly taken and Gordon got in behind the napping back line and Joe Maguire was adjudged to have nudged the Banbury #18. Jaanai Gordon dusting himself down to despatch the spot kick. With Trinity rocking after conceding, this wasn’t one for the faint hearted, The Puritains immediately searching for a second, going close from a Giorgio Rasulo corner, before Dias dragged his effort horribly wide after some ingenuity from that man Gordon to play in the midfield runner.

Trinity tormentor in chief, Curtis Morrison was involved again on the right, setting Topliss to swing a first time cross to the back post, Kingsley James needing two bites at the cherry, but finishing underneath Harding to restore Trinity’s advantage with six minutes to play.

Again, Banbury came at the Holy Blues, but despite the possession, had little in the way of shots on goal for Joe Green to deal with, but three minutes into added time, the referee bizarrely pointed to the spot for the third time of the afternoon. Maguire’s challenge deemed to somehow have been unfair. And with nerves of steel, Jaanai Gordon stepped up to slot home his second penalty of the afternoon and level things, despite the vehement protestation’s of those in Gainsborough Trinity blue. Full time: Banbury United 2 Gainsborough Trinity 2.