The Holy Blues set up an Emirates FA Cup Second Qualifying Round clash with BetVictor Southern Central side, Rushall Olympic having seen off the top of the table side, Banbury United in a replay on Tuesday evening. A solitary Kingsley James strike, securing Trinity’s passage. From kick off the visitors looked to keep possession and build patiently, but looked as though there could be a mistake along the way, especially with the turbo charged heels of Curtis Morrison snapping around the ball.

Johnson though had the first sight of goal, getting on the end of a Charlie Hawtin centre, but under pressure his header lacked the power, with Joe Green in the right position to snuff out the danger with minimal fuss. Gavin Allott won possession back from another mis-placed Banbury pass, but after exchanging passes with Morrison, Allott couldn’t get any power behind his effort and it was a let off for the visitors.

Branden Horton, starting at centre back in place of the ill Nathan Stainfield, slotted straight into the Trinity defence, and the on loan Doncaster Rovers’ man was equal to the threat as Dias looked to find a slide rule pass to split open the Trinity defence. The high press of Gainsborough, driven on by Kingsley James in the centre of the park saw the Holy Blues turn over possession, enabling Harry Middleton to stride forward from the middle of the park and test Jack Harding with a low 25 yard effort.

Trinity won a couple of corners in succession as Gainsborough exerted some pressure, first Curtis Morrison saw an effort charged down as he looked to make half a yard. From the resulting corner, Simon Russell stood up a cross to the back post, but the deep ball was well defended, Banbury content to concede another corner. Ten minutes before half time, Sam Topliss went close to opening his Gainsborough account with a rasping effort from 22 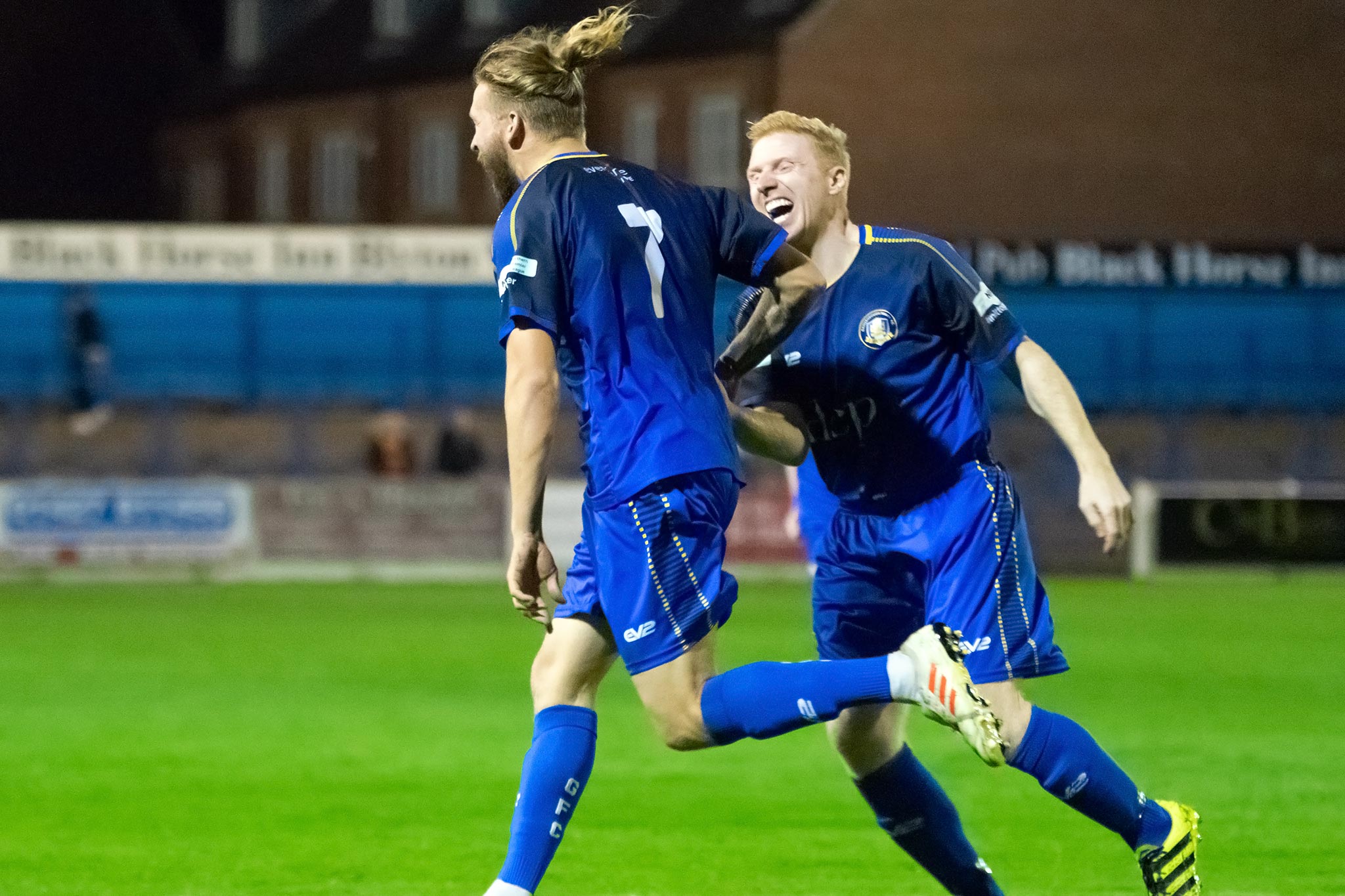 yards. More perseverance from Morrison saw the front man win the ball back for the Blues, feeding Kingsley James. James came inside, but he saw his effort charged down, falling kindly for marauding wing back Topliss, who caught his effort sweetly, only to see the effort fly narrowly wide!

Curtis Morrison then went close, Allott and James competing well for the aerial ball. Simon Russell was able to pick up the loose ball and feed Morrison, who with his back to goal made himself half a yard to spin - firing narrowly over the bar - as Trinity finished the half strongly. Half time: Gainsborough Trinity 0 Banbury United 0.

Causing a nuisance, Morrison started the second half in much the same way as he ended the first. Henderson’s over zealous in the challenge saw him give a free kick away in the left hand channel. Harry Middleton stepped up to float the ball towards the back post, despite a Banbury defender getting something on the ball, he couldn’t prevent the ball finding it’s way out to Gavin Allott on the right. Able to get the ball out of his feet, Allott was able to float a ball into the centre, which Kingsley James threw himself full length at, getting the telling touch to beat Jack Harding and put Trinity in front!

Shortly after taking the lead, Trinity had to weather an almighty storm as Banbury went in search of an equaliser. Joe Green bravely blocking at the feet of Jannai Gordon to preserve Trinity’s lead, the Holy Blues scrambling the follow up away from danger. Harry Middleton looked to pull the strings in the middle of the park, as he tried to establish an understanding with the ever willing runner that is Curtis Morrison. With the game swinging back and forth, Gordon then had a stabbed effort at goal as he was pressurised, Green with everything behind his attempt. Harry Middleton himself then dragged an effort wide after he did well to join in with an attack from the midfield. Morrison’s perseverance creating an opening for Middleton, that he just couldn’t fire on target.

On 66 minutes, a positive spell of play saw Trinity knock a dozen or so passes around, before Gavin Allott was able to spring the offside trap and cut in on goal. Primed to shoot, with only the goalkeeper to beat, Jack Harding clipped the big number nine and the referee had little hesitation in pointing to the spot. Allott dusted himself down and stepped up to take the penalty, with Harding cautioned, he immediately redeemed himself with a diving save to his left, to leave Trinity’s lead a slender one with 24 to play.

Undeterred, Allott again sprung the offside trap, and with options to his right, this time he looked to square the ball across to the supporting cast, only for Connor Roberts to do brilliantly, getting back to divert the ball behind for a corner to the Holy Blues. Kingsley James got on the end of a corner kick, powering a header downwards - it was somehow deflected over Harding’s cross bar, and a goal kick awarded.

The Puritains were patient as they tried to pick away through the organised Trinity rear-guard, marshalled superbly by skipper Nathan Hotte, supported superbly by Joe Maguire and young Horton. With a quarter of an hour to play, Dias and Ngaar had efforts; Dias’ effort couldn’t find a way past Joe Maguire, before the substitute blazed over the bar from 18 yards.

A couple of minutes later, the visitors had the ball in the net, and thought they had levelled the game, but for an eagle-eyed offside flag raised in front of the Carlisle Street terrace to cut short the visiting celebrations, Haysham going a fraction too soon! Fortunately for Gainsborough, composure in the final third was lacking as time ticked by for Banbury. A couple of wild efforts, disappearing into the night sky, the latest of which was from Dennilson deep into added time at the end of the second half. And with it, cementing Trinity’s place in the Second Qualifying Round of the Emirates FA Cup. Full time: Gainsborough Trinity 1 Banbury United 0.