Gainsborough fell to a disappointing defeat on the road to Cheshire based, Witton Albion on Saturday. Liam Goulding netting the only goal of the game, a stunner from range that would light up any fixture, as Trinity, despite plenty of endeavour, were unable to break down a resolute Witton rear-guard. Missing two of the defence that had shut out Banbury United on Tuesday night, Liam King was forced to shuffle his pack, reverting to a 4-4-2 formation.

Nathan Hotte and Jamie Green were both unavailable, as Branden Horton was switched to left back & leading marksman, Ashley Worsfold was restored to the front line, alongside Gavin Allott, with Curtis Morrison dropping to the wing. Best described as a slow burner, the first half lacked any real cut and thrust, with Trinity’s best efforts coming from set pieces. From a Harry Middleton corner, Nathan Stainfield saw his header blocked, before his follow up shot was met in similar fashion. Curtis Morrison was also unable to find a way through as the home side started as they meant to go on, throwing bodies on the line and protecting Chris Renshaw’s goal.

A number of balls flashed across the face of the Witton goal, Stainfield again threatening, but unable to find the target, while Witton created little in the way of clear-cut chances, Will Jones flicking at an effort, before James Murray’s follow up lacked composure. The Holy Blues will feel aggrieved not to have something more out of the game at the interval, but the game was well placed at the break & could go either way. Half time: Witton Albion 0 Gainsborough Trinity 0.

It was Trinity’s turn to defend, Witton coming out of the traps quickly. Murray again asking questions down the Gainsborough left, Branden Horton equal to the task to clear. With the pressure being exerted, Nathan Stainfield fouled 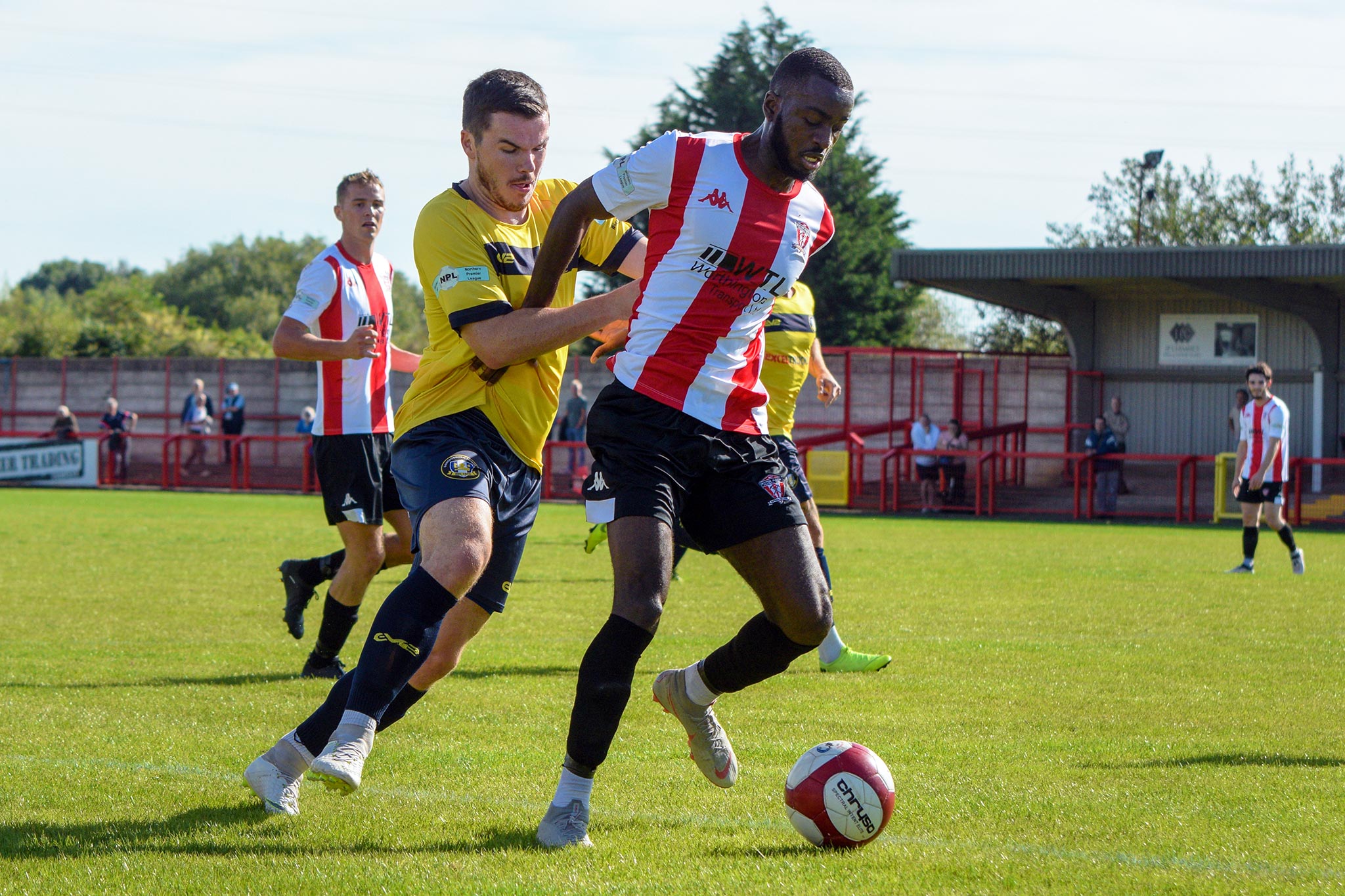 Will Jones on halfway, the diagonal ball into the box was put behind for a corner, which Trinity switched off from, Danny McKenna picking out Liam Goulding thirty yards out. A touch to settle, Goulding let fly with an unopposed effort from 25 yards, which Joe Green could do nothing about.

A goal to defend, Witton had something to protect. And that made Trinity’s task all that more difficult. Liam King’s response was to throw on Brodie Litchfield, replacing Worsfold who was struggling to get any change out of the Albion defence. Litchfield trying to find pockets of space in a congested midfield. One mazy run ended led to a strike on goal for Allott, as the substitute was chopped down, Allott’s effort not troubling the home shot-stopper.

Ross Hannah replaced Simon Russell making his 200th appearance for the club, and latterly Elliot Wilson came on, as Joe Maguire was sacrificed with Liam King looking to throw everything at the home side. Danny McKenna got away down the right and delivered a pinpoint cross for Will Jones, but the forward’s header was straight at Joe Green. What it had in power, lacked in direction & the Trinity ‘keeper in the right place to keep the visitors in the game.

Yet the ball wouldn’t fall kindly for the Holy Blues, particularly in the final third. The best chance dropping to Elliot Wilson, moments after coming on. Ross Hannah’s ball from right to left travelled all the way to Wilson, but the youngster could only nudge the ball into the grateful arms of Renshaw in the Witton goal.

With five attackers on the field, looking for a way back into the game, Hannah found Gavin Allott, who came inside on his left foot, but at the final moment – skewed his effort off target. Kingsley James went close. His effort getting the faintest of nicks to take his effort wide of goal, before Renshaw did brilliantly to pluck Ross Hannah’s corner kick out of the sky and lift the pressure on the Albion backline. Full time: Witton Albion 1 Gainsborough Trinity 0.