Gainsborough Trinity exited the Emirates FA Cup at the Second Qualifying Round stage, as Rushall Olympic scored a goal in each half to dispatch the Holy Blues. With the wind at their backs, Rushall pinned the Blues back. An aerial approach from art pieces asking countless questions of a defensive unit boasting two young defenders in Branden Horton and debutant Ciaran Brennan on loan from Sheffield Wednesday.

Lee Smith's long throw virtually landed in the centre of the goal. Vastly experienced defender, Asa Charlton, up from the back couldn't believe his luck and could only send his header over the bar. Chekanne Steele was on song and Liam King adapted his side's shape, but midway through the half Steele skipped past Jamie Green & Branden Horton as both lost their footing and picked out Jonathan Letford, who slammed a composed finish past the exposed Joe Green in the Trinity goal. The Gainsborough goal was under siege for a large chunk of the first half, as Trinity struggled to get a foothold in the game.

The Trinity defence defending like their lives depended on it. Just after the half hour mark, Trinity's Simon Russell tried to force a way through but found Flatt equal to his attempts. Kingsley James then brought a smart save from the home custodian getting down to his left hand side to deny the Trinity midfielder. But Rushall had the advantage and Rushall had something to hold on to. Half time: Rushall Olympic 1 Gainsborough Trinity 0.

It was a case of roles reversed in the second period though, as Gainsborough came forward regularly, but Jonathan Flatt didn't have a save to make. As the Holy Blues loaded set pieces into the box, Nathan Stainfield saw not one, but two shirts ripped from his back, but no foul play was spotted by the referee, much to the ann 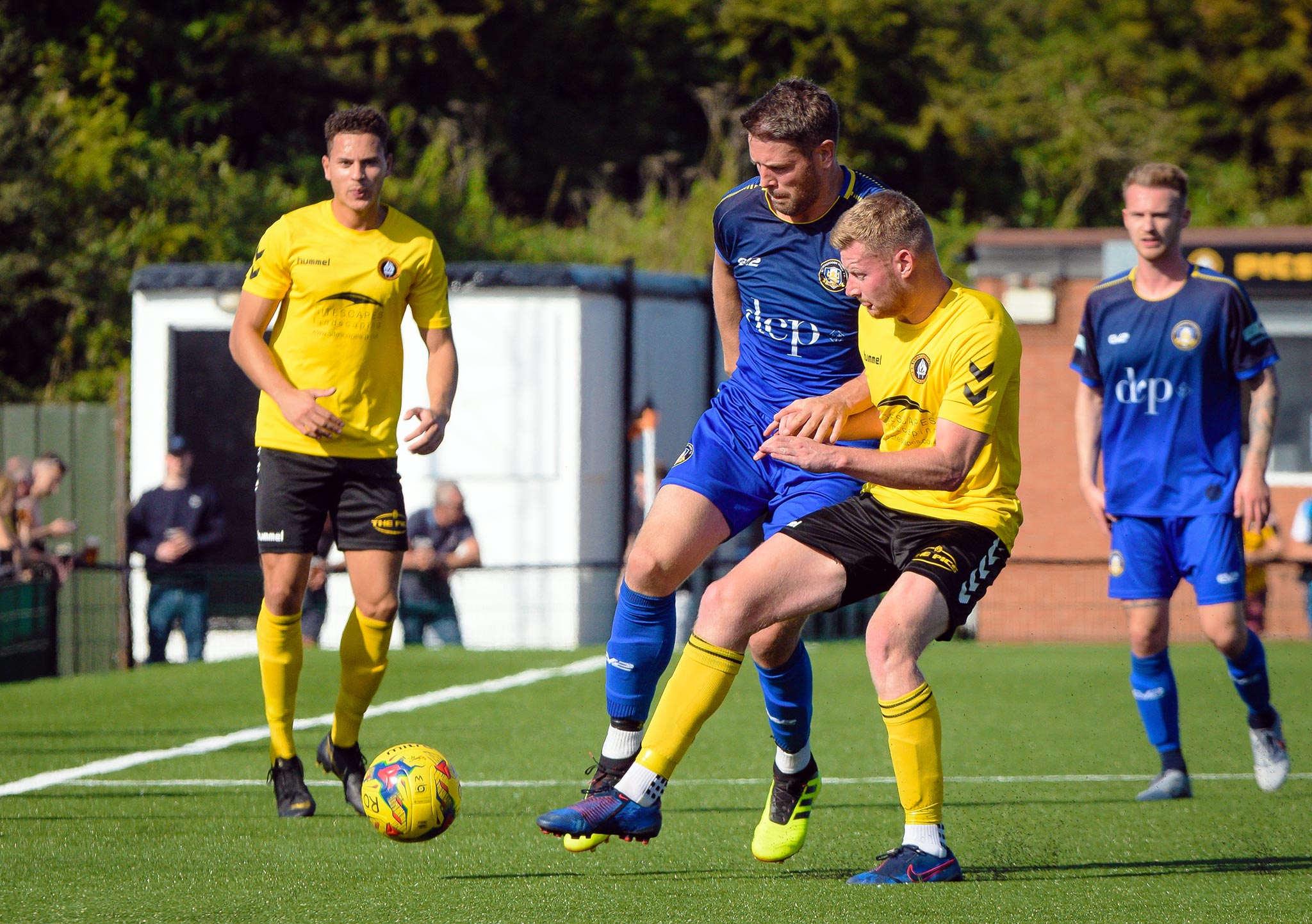 oyance of the afternoon's skipper and the visiting Trinity faithful. Horton and Simon Russell tried their luck from range. But their efforts were both met by brave blocks, long before Flatt would have been in danger for the home side. A threat on the counter, Rowley & Letford looked to add to the home sides advantage as the two linked well together.

Trinity, looking to grab an equaliser, were undone fourteen minutes from time, Rushall doubled their advantage when a left wing cross was sent in right footed by Mitchell Clarke. The ball deceiving everyone and squirming in at the far post, to all but kill the tie. The introduction of Ross Hannah in the aftermath of Olympic's second goal, sparked a talking point as Levi Rowley reacted badly to a foul from the player/assistant. Shoving Hannah to the ground and receiving his marching orders. Ross picking up a yellow for his part in the incident.

Seeing more of the ball with the numerical advantage. Rushall remained resolute and offered little in the way of hope to the Trinity attack. Three minutes from time, Brodie Litchfield went close for the Holy Blues, but his effort drifted the wrong side of Jonathan Flatt's upright. And despite plenty of huff and puff, Gainsborough weren't able to get anything from the closing stages. Full time: Rushall Olympic 2 Gainsborough Trinity 0.