Gainsborough Trinity made the long haul to South Shields on Tuesday night and came away with nothing to show for a determined, hardworking display in monsoon like conditions as a goal at the end of each half secured the points for the Mariners. Trinity were rocked by the late withdrawal of Nathan Stainfield and Shane Clarke, the pair involved in an accident en-route to meeting the team coach ahead of the game.

With this in mind, Liam King made five changes to the side that had lost to Rushall Olympic in the cup three days prior. Club captain, Nathan Hotte replacing Stainfield at the back, as Joe Maguire was also recalled to the starting XI. Young Owl, Ciaran Brennan shifting to right back as Sam Topliss dropped to the bench. Curtis Morrison & Ross Hannah came in to add creativity and attacking intent at the expense of Harry Middleton and Gavin Allot. George Willis also made his second debut for the club, following his three-month loan deal from Boston United, Joe Green taking a place on the bench.

A Josh Gillies corner from the Trinity right found centre back Gary Brown up from the back, the experienced defender bringing the ball down on his chest before firing goal-wards. Youngster Ciaran Brennan was in the right place on the line to divert the ball away. Willis was then equal to a thumping Adam Thurston strike, parrying the ball well before Trinity scrambled away the follow up effort.

Brennan went into the referee’s notebook on the fifteen-minute mark, bringing down Blair Adams by any means possible. Robert Briggs fired a warning as his free kick flashed a yard over the bar from the left-hand edge of the area! Trinity had an attack, where good play from Curtis Morrison beat three sliding challenges on a greasy surface, before looking to pick out Ross Hannah, 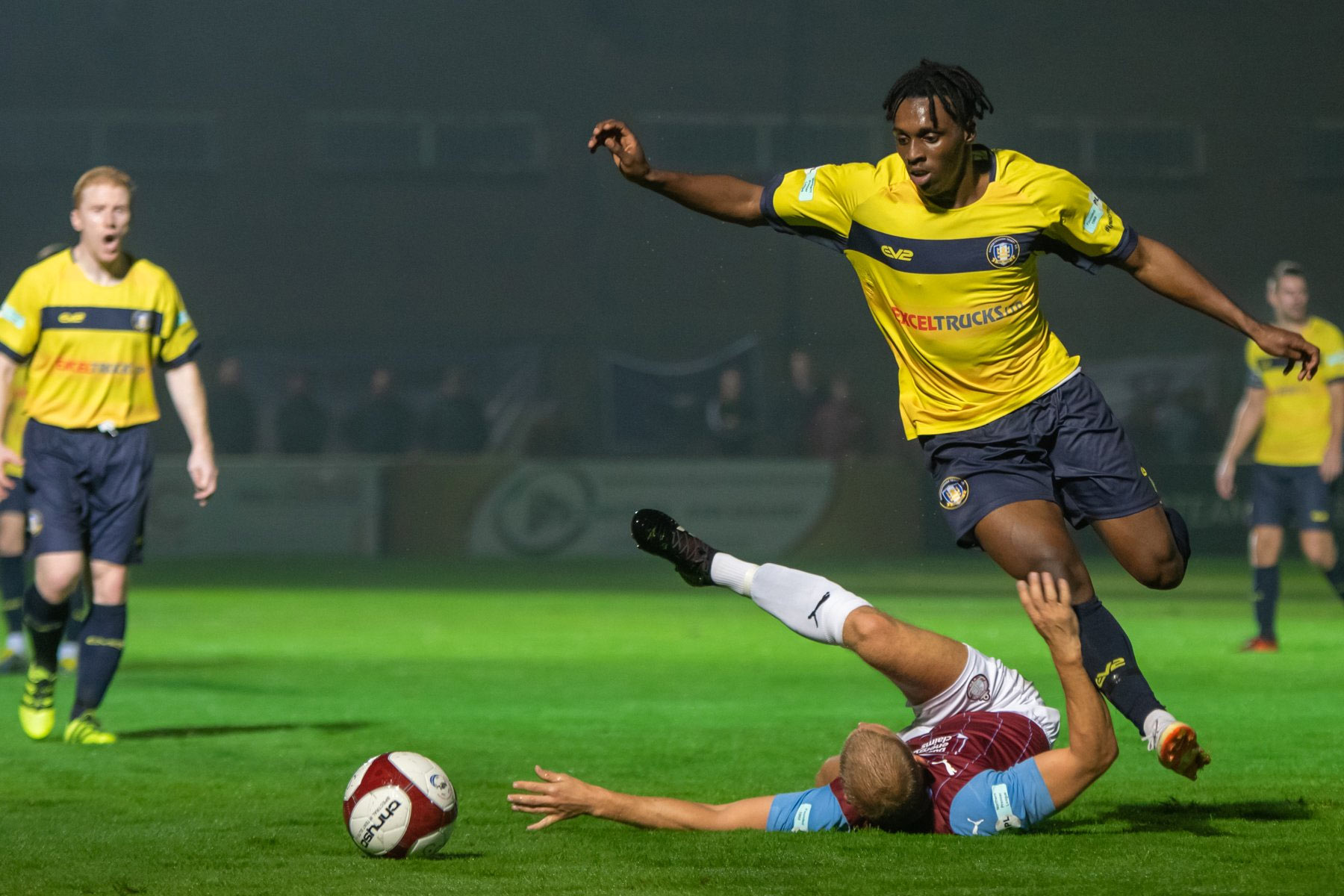 Dillion Morse doing well to cut the ball out at the near post, conceding a corner in the process.

Just after the half hour mark, Willis saved comfortably from Adams. Neat one touch play in the build-up saw Adams try his luck from range, but his right footed effort lacked the power to truly trouble Willis. A long clearance from George Willis, searching for Ashley Worsfold saw Gainsborough’s leading marksman fouled with the ball in flight. Ross Hannah taking the free-kick, only to see his effort flash a yard wide of the near post! Hannah himself went into the referee’s book, when he fouled Josh Gillies. Gillies dusting himself down to float a free kick into the box, which Briggs glanced wide of the target.

As the rain lashed down and half time approached, Liam King would have been the happier manager if the score line had remained level. However, the impressive Blair Adams had other ideas. Coming forward from left back, he linked well with Joshua Gillies, and as Gillies looked to guide the ball towards the bottom right hand corner, Willis sprung to his left, and the ball took a massive deflection off Joe Maguire, rendering Willis helpless to keep the ball out. Advantage South Shields going in at the break. Half time, South Shields 1 Gainsborough Trinity 0.

Trinity quickly came at South Shields after the restart, Curtis Morrison looking to exploit a gap between the two home centre backs after good play by Simon Russell picked out the pacey forward - but Morse recovered well to block Morrison’s effort. Five minutes later, Adam Thurston burst into the box, but he couldn’t steer his effort on target, agonisingly drifted half a yard wide of George Willis’ right hand up right.

Referee Mr Ellis saw nothing untoward as Shields and Jon Shaw in particular claimed a penalty as Gillies free kick was sent over towards the back post, before Shaw was first to an under hit back pass, Willis doing just enough to win the goal-kick off the experienced forward. With a quarter of the game remaining, Ashley Worsfold was shown a straight red card by the referee, having consulted with his Assistant. An altercation with Worsfold & Gary Brown catching the man with the flag’s attention as the two players tangled in a heap on the ground.

Both teams continued to probe as time ticked away, Shields had another penalty appeal turned down, before Joe Maguire leaning back, couldn’t find the target from a right-wing corner, his effort not troubling Boney in the Shields’ goal. Lee Mason fired over after he was played in by Craig Baxter, Robert Briggs was then booked for an overzealous challenge on Kingsley James in the centre circle, that on another night could have been red.

Simon Russell then shot over the bar after good play down the left-hand side involving James, as the game clicked into overtime. And the Holy Blues were made to pay, when substitute Alli held off the Ciaran Brennan and with a deft touch around the corner, released the veteran forward Jon Shaw and his crisp finish off the foot of George Willis’ left-hand up right ensured South Shields would emerge with all three points. Full time, South Shields 2 Gainsborough Trinity 0.