Liam King rang the changes as the Holy Blues returned to home soil, with Nathan Stainfield back in the starting line-up. Brodie Litchfield earned his first start, following a couple of impressive cameos in the recent away games. And Gavin Allott added physicality to the front line as Jamie Green, Joe Maguire and Curtis Morrison dropped to the bench. Gainsborough came from a goal behind twice to level things up late through Simon Russell’s 20 yard strike three minutes from time, to halt a disappointing run of defeats.

Mickleover took the lead against the run of play, when veteran front man Lee Hughes punished some slack Trinity defending, the visitors turning defence to attack, from a corner kick. Experienced forward Stuart Beavon ran half the length of the field, cutting the ball to his strike partner Lee Hughes, who finished at the second attempt, his effort taking a slight deflection on its way past Willis making his second home debut. Despite a number of corners won, the Holy Blues couldn’t find the finishing touches to get past Nathan Broome. Some resolute, last ditch defending kept Sports leading. Nathan Stainfield saw an effort cleared off the line, before Gavin Allot somehow contrived to hook an effort over the bar from four yards out.

Finally, eight minutes before half time Trinity were level, when the move of the match saw the impressive Ciaran Brenan link brilliantly with Gavin Allott. Allott’s shot was saved by Nathan Broome. The rebound falling to Brennan, who picked out Ash Worsfold to head home his fifth of the campaign, to give Gainsborough the least they deserved from a great deal of first half territory. Half time, Gainsborough Trinity 1 Mickleover Sport 1.

Assistant boss, Ross Hannah linked with Kingsley James. Creating half a yard of space, Hannah spun and struck a low effort that nestled half a yard the wrong side of Broome’s left hand uprig 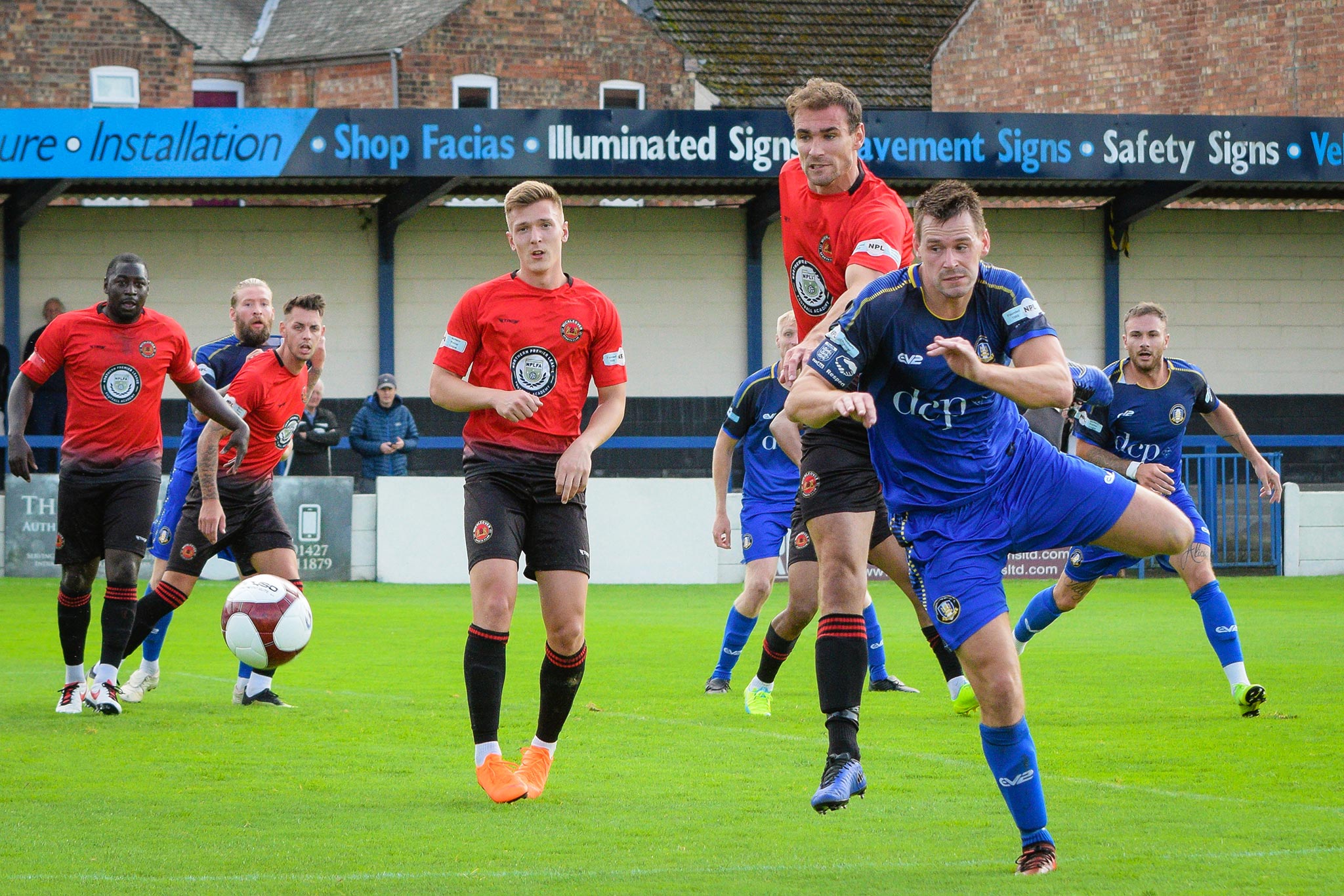 Again Gainsborough had the lion’s share of the ball, but Broome had very little to do. The sum of his action, gathering the ball from Ash Worsfold’s close range header. If Worsfold could have directed the header anywhere else, Trinity would have been level.

The game began to heat up as the Holy Blues chased a late leveller, but left spaces that Sports looked to exploit. And Liam King’s men were grateful to George Willis, when he was on hand to save smartly. The on loan ‘keeper getting down quickly to deny Nathan Modest, on as a second half substitute, after Beavon played him in, keeping Gainsborough in the game. The goalkeeper did brilliantly to deny the former Gainsborough trialist and keep the Blues in the game, going into the final minutes.

In the 90th minute, Gainsborough did find an equaliser, Simon Russell thumping home through a crowded penalty area, to secure a point. Patient build up, cumulated in Nathan Hotte swinging in a centre from the right. Worsfold battling for the ball, it fell to Russell on the edge of the box, and the energetic midfielder steered home the effort that sent the Martin & Co into raptures.

Mason Warren still had time to test Willis from a free kick, the Mickleover midfielder getting the ball up and over the wall, but Willis was in the right place to hold comfortably and ensure the Blues halted their run of defeats, ahead of Bamber Bridge’s visit on Tuesday evening. Full time, Gainsborough Trinity 2 Mickleover Sports 2.