Gainsborough Trinity returned to winning ways on Tuesday night with a 4-1 victory over Bamber Bridge at the Martin & Co Arena, goals coming from Gavin Allott, Ross Hannah, Harry Middleton and Simon Russell. The Holy Blues moving up to 16th position in the league, ahead of the weekend’s trip to Basford United. Liam King made a trio of changes from the side that drew with Mickleover Sports at the weekend.

Restoring Jamie Green to the starting XI, alongside Curtis Morrison and Harry Middleton. Ashley Worsfold missed out, serving the first game of his three-game ban, while Brodie Litchfield and Branden Horton dropped to the bench. Gainsborough started the game on the front foot, with the visitors struggling to cope with Trinity’s pace and verve. The Blues were rewarded in the ninth minute, and there was an element of good fortune, something that has been missing for a large chunk of the season to date. A slip from the visiting goalkeeper let in Gavin Allott to open the scoring.

On 23 minutes, Allott turned provider, angling the ball forward to strike partner Ross Hannah. Hannah accelerating away, before slipping a first-time finish underneath Lloyd Rigby. An effort the ‘keeper will feel he should have done better with, but nonetheless, it was a goal to get the assistant boss up and running for the season!

The game wasn’t without chances for the visitors and a prime opportunity fell to Tom Walker, but his twelve-yard header cannoned off the top of the bar and behind for a goal kick. Trinity were in heaven on half an hour, when Harry Middleton drove home from the edge of the box to put the Holy Blues in the driving seat.

George Willis was then called into action, making a superb save, adjusting himself in full flight, he was equal to a 35-ya 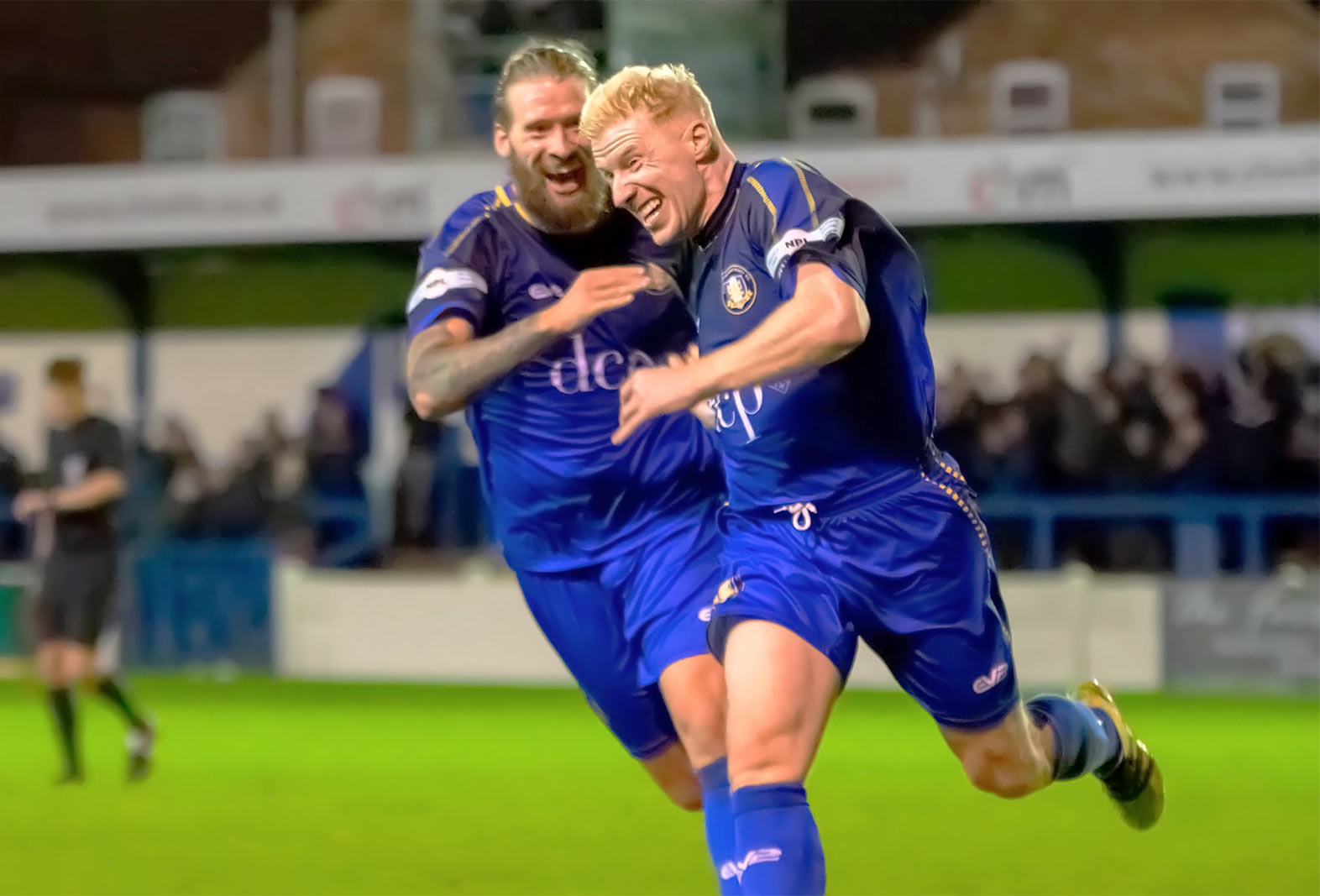 rd hit from Adam Sumner, which took a nasty deflection, to palm the ball away, before Simon Russell could have made it four, but agonisingly slipped the ball the wrong side of the post. Exerting pressure, Kingsley James sent an effort whistling past the post after tricky wing play by Curtis Morrison down the left-hand side, but Gainsborough couldn’t add to their half time lead. Half time, Gainsborough Trinity 3 Bamber Bridge 0.

The second half saw Trinity caught cold. Bamber Bridge made a double change at the break, and with the Holy Blues still in the dressing room, substitute Ryan White crossed for Kieran Charnock to head home, reducing the deficit. It wasn’t to be the visitor’s night though as minutes later, the goal-scorer left the field injured. Simon Russell’s probing saw the midfielder get a left footed effort away that tested Rigby in the visiting goal, before terrific combination play between Russell and Morrison saw a gilt-edge chance present itself for Gavin Allott, but the forward couldn't find the target with his header.

George Willis was on hand again to deny Allistair Waddecrr down to his left-hand side as Bamber Bridge continued to look much improved in the second period. before turning a Matt Lawlor effort over the bar for a corner kick. Brodie Litchfield replaced Ross Hannah and was instantly involved after coming on as substitute, teeing up Allott, who fizzed an effort fractions wide!

Bridge then came again as time ticked down, the Holy Blues engaged in some last ditch defending to preserve the lead, with Willis denying Dudley. Put through by Michael Fowler, Willis saved with his legs. Trinity were able to add a gloss to the performance though, adding number four in the final throws of the game a ball into the channel was chased down by Gavin Allott, who provided for Simon Russell to score his second goal in as many games. Both in the 90th minute to give the Holy Blues a three goal cushion. Full time, Gainsborough Trinity 4 Bamber Bridge 1.