Basford United and Gainsborough Trinity played out a seven goal thriller at Greenwich Avenue on Saturday afternoon, but it was the home side who prevailed, as three second half goals were not enough to earn Liam King's men something from the game. Going with the same starting eleven that had beaten Bamber Bridge at the Martin & Co Arena on Tuesday evening. It was to only be a place on the bench for youngster Myron Gibbons, signed on a youth loan from Doncaster Rovers.

The Greenwich Avenue surface (3G) heavily watered prior to kick off and again at half time, provided a slick surface for the ball to be zipped about on and the 292 paying punters were treated to a display filled with attacking intent from both sides. George Willis was soon forced into action, diving full length to his right to deny Corey Grantham on four minutes. Before Trinity had their first foray into opposition territory, Harry Middleton making an opening on the left side of the Basford penalty area, only for his drive to be blocked by the legs of Kieran Preston in the Basford goal.

On twenty minutes, Basford were in front. Grantham won a free kick on the Trinity right, and the Holy Blues switched off as centre back Brad Gascoigne got free round the back and had the simplest of tasks to turn in Matt Thornhill's free-kick. Eight minutes later, the hosts doubled their advantage, forward Nathan Watson dropping deep. Afforded time to turn, he hit a sublime cross field ball to roving left back Ryan Wilson who controlled and crossed on the run, Kane Richards with the simplest of headers to beat Willis and give the home side a cushion. Jamie Green got to a loose ball first and steered in a great cross to the back post. Kingsley James' downward header was somehow blocked, the ball falling for Simon Russell. He shaped to strike a volley that fizzed a yard the wrong s 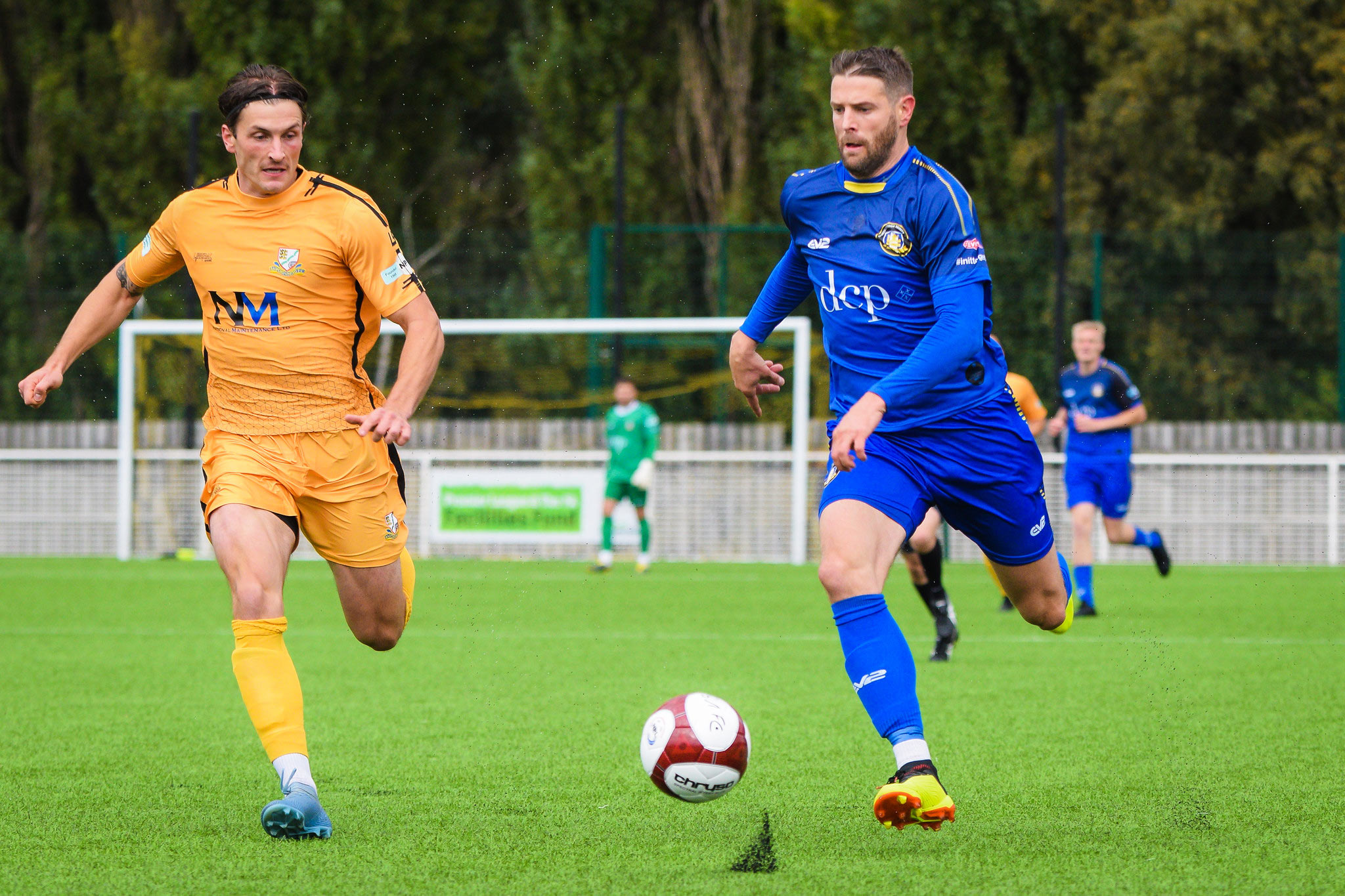 ide of the post! Half time, Basford United 2 Gainsborough Trinity 0.

Strong words were spoken at the break, and the visitors came out with renewed purpose. Kingsley James did brilliantly down the Gainsborough right. He burst to the by-line and cut the ball back to the supporting Ross Hannah, who finished well, netting his second in as many games, to halve the deficit. Thirty seconds later though, Basford had restored their two goal advantage. Kane Richards doubling his own total, tapping in at the back post. Twelve minutes later, it was appeared to be game over as Courey Grantham added a fourth, slicing through the Trinity defence and slotting past Willis, to all but kill the game.

Trinity had other ideas though. Youngster Myron Gibbons making his debut from the bench latched onto and beat Preston with a smart finish. Curtis Morrison flashed an effort narrowly wide with a shot on the spin from ten yards out, before Simon Russell netted his third goal in as many games, steering home a low drive from within the D following good awareness by Middleton, to set up a grandstand finish.

Russell with the bit between his teeth then drove forward from midfield, but snatched at his effort, driving over Preston's bar. Gibbons had one last chance for the Holy Blues, but couldn't find the finish, as Basford navigated a nervy closing few minutes to secure the victory over Liam King's men. Full time, Basford United 4, Gainsborough Trinity 3.