Gainsborough Trinity saw out a goalless draw against Buxton on a chilly Tuesday night. First big chance for Gainsborough came after some great vision from captain Nathan Hotte who pin-pointed the ball for the tall Gavin Allot in the box who flicked the ball just over the top of the goal with his head. Gainsborough produced an attack down the left which released Curtis Morrison down the wing who attempted to dink a ball across the face of goal, but Buxton centre-back Connor O’Grady was quick to hash the ball away.

On the 15-minute mark, Buxton asserted their presence on the game by having their first big chance as Brian Wilson drilled low and wide from 25-yards. An impeding run from Liam Hardy forced Trinity goalkeeper George Willis to anxiously charge out of his box to head away the danger. Trinity did continue to have the most chances out of the two sides after coming agonisingly close after Hotte scuffed the ball on the volley from just inside the box. Simon Russell was left bewildered as Jude Oyibo nutmegged the midfielder and proceeded with a Buxton attack which was eventually quashed by the hosts.

Superb diagonal ball from Gainsborough unleashed Morrison down the right-hand side. After breaking into the box he was chopped down but quickly got back up and kept the attack alive. Eventually the ball landed at the feet of Allot whose shot had the sting taken out of it by the Buxton defender from close-range. Willis was forced to parry an effort away close to half-time after a blazing strike from Martin Pilkington. Gainsborough left the pitch disappointed that they were unable to make their chances count against a side who were low on confidence. Half time, Gainsborough Trinity 0 Buxton 0. 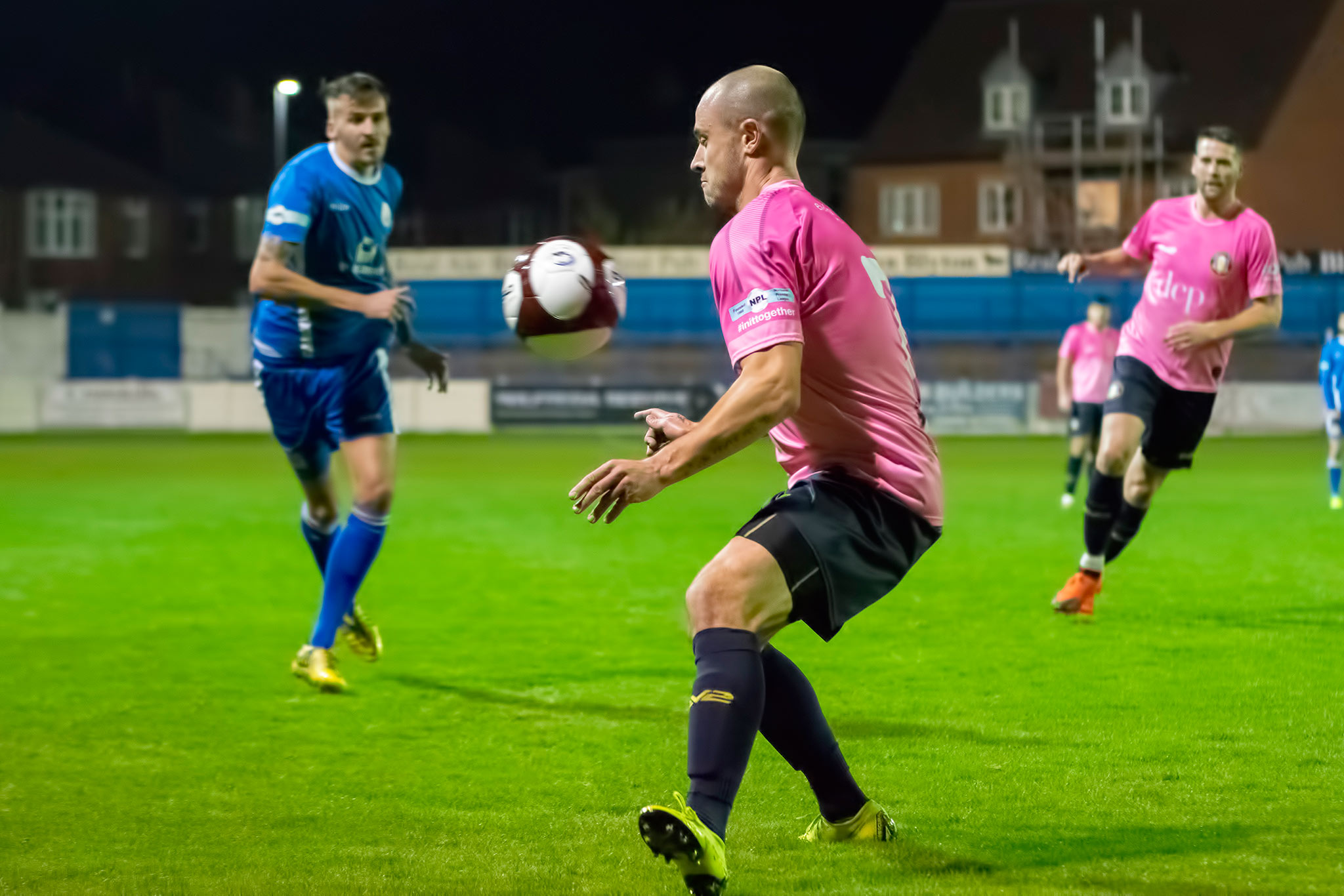 was stunted by Buxton. Morrison works hard to win the ball back in a threatening position, but his end ball ends up going out for a corner. From the dead ball situation left-back Branden Horton can’t get the ball to settle at his feet as he has a weakened shot on goal.

Another chance comes Trinity’s way which leaves more than to be desired as his effort cannons wide of the top right corner. The first change of the evening came for Buxton on the hour mark as former Sheffield United player Diego De Girolamo came on at the expense of Martin Pilkington. A free-kick from Buxton depicted the kind of game that was unfolding as Aaron Chalmers’ ball from 30-yards out avoided every player in a blue shirt and went straight out of play for a goal-kick.

Branden Horton went into the referees book on the 67th minute for a rash tackle on a Buxton attacker. Another change for Buxton saw the introduction of Sam Kilner for Dale Whitham on the 71st minute. A repeat of an earlier corner came in which Joe Maguire missed an uncontested header before the ball fell for Horton once more who couldn’t make his shot count.

De Girolamo had his first effort since he came on when his shot was dragged wide of the right-hand post. Doncaster Rovers loanee Myron Gibbons was introduced for Ross Hannah with 15-minutes left of normal time. For one moment it looked as though Gainsborough had conceded a penalty after Liam Hardy went down inside the 18-yard box, but the referee gave the visitors a free-kick just on the edge of the penalty area. Hardy took the resulting set-piece and fires into the heavens.

A final change for Buxton saw Jacob Bevan come on for the ever-present winger Jude Oyibo. A last minute scramble saw Willis struggle to hold onto the ball which resulted in pink bodies being thrown to the ground to prevent the visitors from nicking a late three points. Full time, Gainsborough Trinity 0 Buxton 0.