Gainsborough Trinity slipped back into the BetVictor Northern Premier League drop zone with a disappointing 3-1 defeat away at Ashton United. The home side securing their first home win of the season, as Trinity’s woes on the road continued. As boss Liam King made one change to the side that drew 0-0 with Buxton FC, the enforced change saw David Robson making his debut between the sticks, replacing George Willis who was recalled by Boston United in midweek.

The best laid plans were quickly disrupted however, when Joe Maguire sustained a head injury inside the opening five minutes, forcing a defensive reshuffle as Sam Topliss replaced the centre back with skipper Nathan Hotte moving in-field. Despite the forced change, Trinity were fairly untroubled in the first half, though Branden Horton had to be alert to head clear from under his own cross bar and Robson watched an effort fizz wide of his right hand post as the hosts did pose marginally the better attacking threat. At the other end, Ashley Worsfold headed straight at Jon Worsnop when well placed, before Kingsley James glanced a header the wrong side of the upright from Ross Hannah’s free-kick. Only for Ashton to take the lead a minute before half time, from a similar set piece. Gianluca Havern rising highest to nod home, unmarked from Nicky Clee’s free kick. Half time, Ashton United 1 Gainsborough Trinity 0.

The second half started as the first half ended, with Gainsborough conceding. Josh Wilson heading home a deep cross to the far post following good play on the Ashton left by Casian Anghel, to double the home sides’ advantage. Things went from bad to worse for Trinity, as former Boston United man, Jordan Slew was given time and space to cut in on the left and fire across David Robson, completing a three-goal salvo either side of the half-time break to end 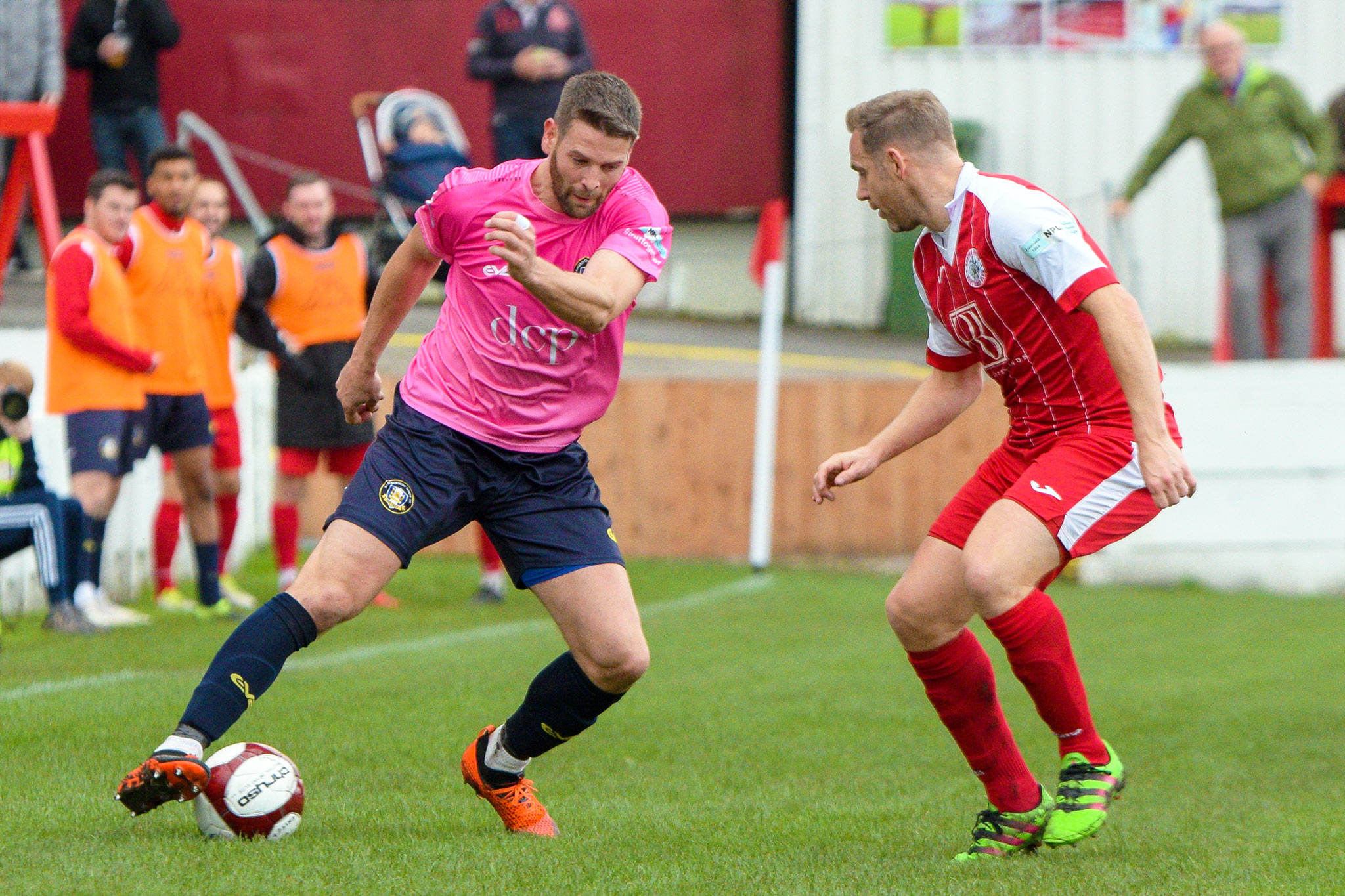 the tie as a contest.

King moved to make changes, strengthening the midfield with the introduction of Shane Clarke, on for Ross Hannah. And Trinity rallied, though rarely troubling the Robins’ goal Gavin Allott wriggled free in the box and looked to find substitute Clarke, but the home skipper Jonathan Hunt cut the ball out at the near post, with Shane poised to pounce.

Trinity did win a penalty, as Tom Field was adjudged to have handled on the line, as Clarke turned a Curtis Morrison corner goal-wards. Ashley Worsfold making no mistake to send Worsnop the wrong way and give Gainsborough a possible life-line.

Myron Gibbons then went close to further reducing the arrears for the Holy Blues. Neat control saw the Doncaster youngster bring the ball down and fire a volley into the side netting as Ashton struggled to clear their lines.

Havern kept alive a deep Nicky Clee free-kick to the back post, but Steven Tames’ acrobatic overhead kick wasn’t troubling Robson’s goal. Nathan Stainfield was then inches away from connecting with Curtis Morrison’s centre, before Lufudo flashed an effort across the face of the Trinity goal. Substitute Lewis Walters then strode over halfway and slipped in Tom Field, but his effort was denied by the legs of Robson. Full time, Ashton United 3 Gainsborough Trinity 1.