Curtis Woodhouse's first league game in charge of the Holy Blues was a pulsating, end to end encounter, a fantastic advert for the BetVictor Northern Premier league and non-league football in general. Coming off the back of a 0-4 away win in the FA Trophy in midweek, Woodhouse took the opportunity to blood four of his five new signings in the fixture against fans-owned FC United. Only Michael Williams unable to feature due tone suspension picked up at former clubs Sheffield FC.

Debuts for goalkeeper Lloyd Allinson, defender Will Thornton, midfielder Billy Chadwick and attacking threat Mitchell Dunne, replaced Robson, Topliss, Maguire and Worsfold respectively. And Woodhouse's new look side flew out of the traps against a side sitting in the play-off spots. With only a minute on the clock, Curtis Morrison cut in from the right flank and curled in a low left footed effort that brought a smart save from the home 'keeper down to his left hand side.

Simon Russell and Chadwick then combined down the left, but the delivery was a fraction too strong for Mitchell Dunne arriving at the back post. A sublime effort from Simon Russell, saw his chip cannon back off the crossbar after fantastic vision from right back Kingsley James unlocked the Rebels defence, Dunne skewing his follow up effort horribly wide. The league's leading marksmen then had an opportunity for the hosts, but Allinson stood up well to save one on one. Will Thornton in the right place, covering on the line to divert the follow up effort wide of the target. Reagan Linney then flashed an effort half a yard over the bar from a narrow angle as Trinity rode their luck. 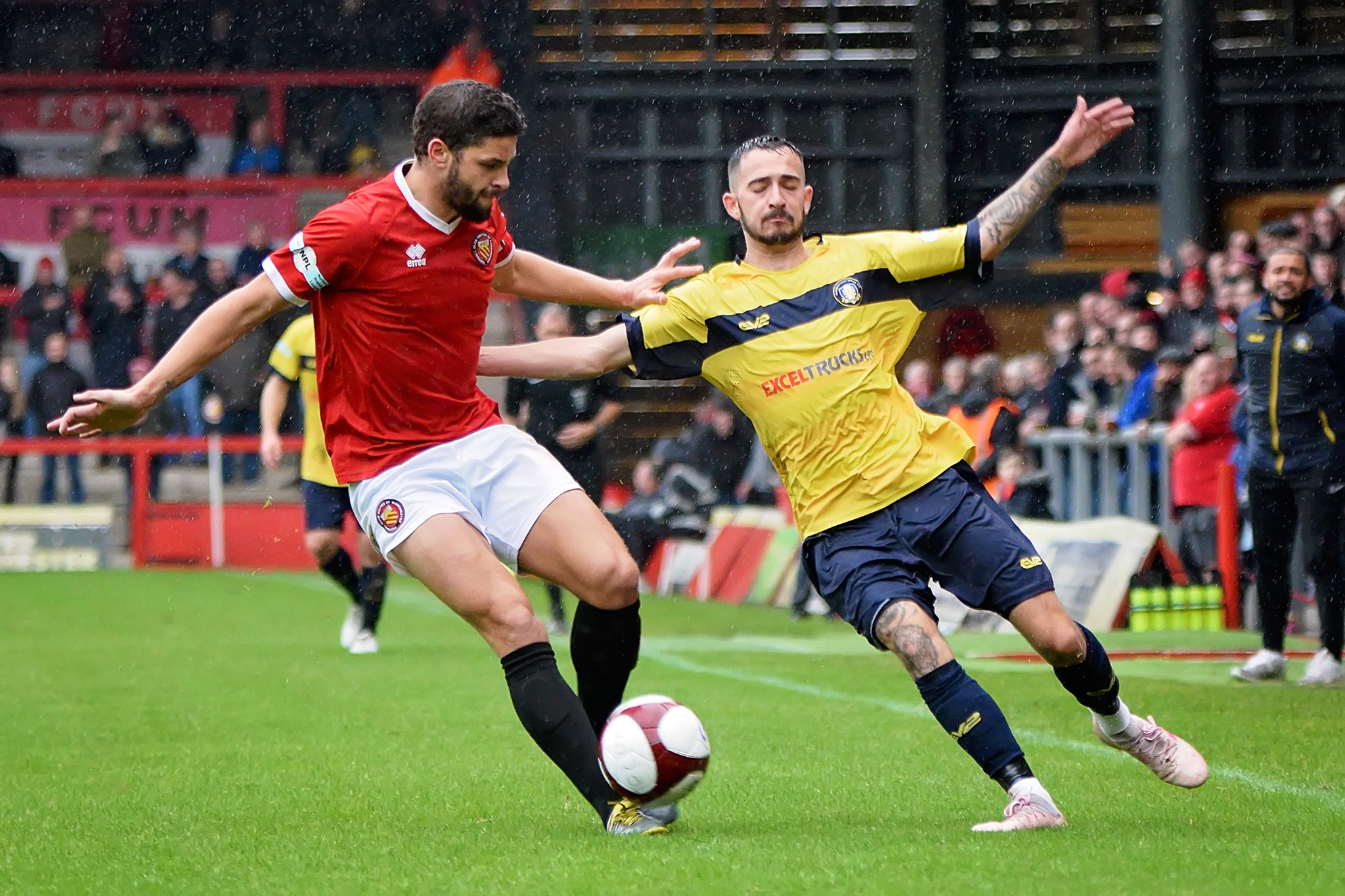 deserved lead. Two minutes later, Allott could have doubled his and Trinity's lead, glancing his header wide from Curtis Morrison's centre. Alex Curran then fashioned a shooting opportunity, but Allinson was equal to the effort.

On the half hour though, United were level. Curran twice struck the wall with weak efforts, before Jordan Buckley swept home the loose ball. Simon Russell almost split the home defence perfectly, only to see his pass slip through on the greasy surface, just evading the touch of the pacey Dunne. Curtis Morrison's direct run was abruptly halted but with the referee playing the advantage. Middleton snatched at his effort, dragging his shot wide of the upright.

Two minutes before the break, an unfortunate injury to Dunne, saw him replaced by Ross Hannah and it took the experienced forward less than ten seconds to make his mark. More impressive play by Morrison saw him play a dangerous ball across the face of goal, Hannah in the right place to profit from some slack defending. Chasing an equaliser before the break FCUM came back at the Blues, Chris Doyle almost diverted the ball past Allinson - though he wouldn't have known much about it, before Jamie Green twice thwarted Tunde Owolabi with some tenacious defending. Half time, FC United of Manchester 1 Gainsborough Trinity 2.

The second half began a slow burner, Allinson dominating his box to relieve the pressure on Trinity. Allott then latched onto a weak headed back pass but he was forced wide. Thornton then had to be alert to clear for a corner, before Allinson was unsighted. Trinity were unable to hold out for an impressive three points however. Fifteen minutes from time, Owolabi showing his worth to the FC cause. He showed a clean pair of heels and raced through, lashing in high past Allinson.

Wave after wave of Red attacks, repelled superbly by every man in a Trinity shirt. With pressure mounting and tired legs, Owolabi cut in from the left, onto his right foot - Allinson got everything behind it. Substitute Shane Clarke, on for the tiring Chadwick adjusted his feet brilliantly and threaded a ball through the eye of the needle. Picking out Allott, though the front man got there, he didn’t have the legs to make FCUM pay. And with an ever decreasing angle, he had to be satisfied with a corner kick.

And with 30 seconds to play, five and a half minutes into added time, Allinson made a superb flying save to deny Charlie Ennis, flying away to his right he turned the subs' pot shot over the bar, Trinity seeing out the final moments to secure a share of the spoils. Full time, FC United of Manchester 2 Gainsborough Trinity 2.