Back in the day, football was born to deliver two hours of recreation for working people, toiling for six and a half days a week. Watching The Holy Blues last three games is a throwback to that by-gone era where 2-3-5 ensured thrills, spills and no shortage of skills to leave fans desperate for the next game to come. The formation may have changed but the elation experienced by the travelling fans who witnessed another display of total football is something the Northolme faithful will grow to love. The Curtis Woodhouse way is to play attacking football with guile, style and a smile.

Apt then that an ex Blade - they of the 'you fill up my senses like a gallon of Magnet', young Brodie Litchfield would make a full debut and Shine like a sixpence in a chimney sweeps brush. He and the ex-Grimbarian gunslinger, second coming Halleluiah Hannah, ran the show, with dynamite on the right Curtis Morrison bagging a brilliant brace to boot. Trinity bolted from the traps and, following a fifth minute throw from Green, Hannah twisted and turned before fizzing in a point-blank rising effort that Singh parried for a corner. From Captain Russell's corner into the six yard box, Litchfield used great strength to pounce onto the loose ball before opening up his body to curl a crisp drive in off the far post. Born to score and one who will soar.

Two minutes later the move of the match saw Allinson roll to Williamson who played a 20 yard ball to Hannah hungrily coming deep into his own half. He took a touch before threading a peach of a ball to Russell that took the Lambs midfield quartet clean out of the game. Russell played out to Green on the overlap and he sent over a terrific ball that found Morrison who finished with aplomb, firing an unstoppable shot back across Singh and into the roof of the net.

Stunned Tamworth, a classy side and far from down and out conjured, Clement threaded the eye of the needle with a sublime slide-rule ball to Hoenes who 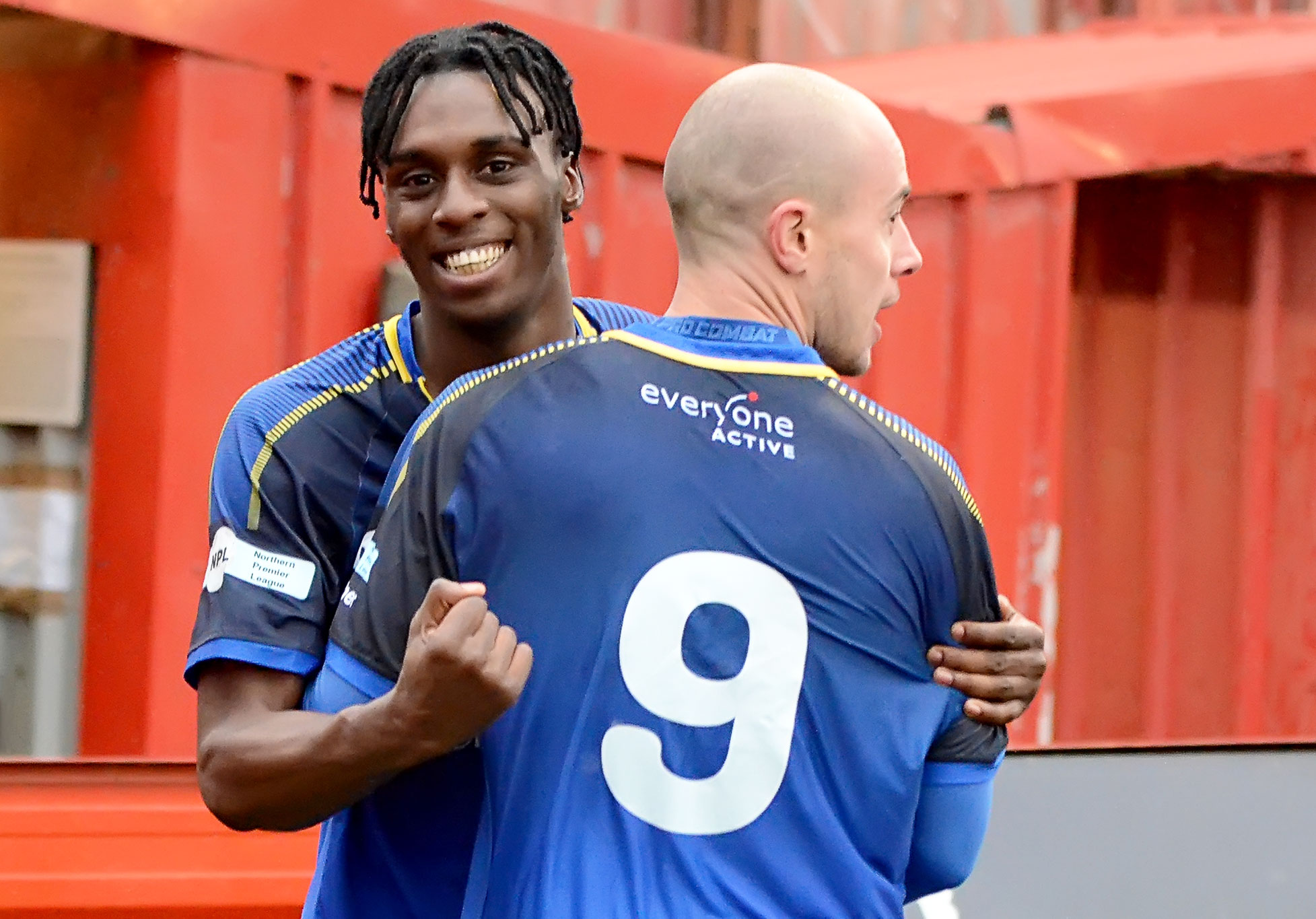 rounded Allinson only to be brought down by the full stretch keeper. Hoenes sent Allinson the wrong way with a perfect shot just inside the left-hand post.

Brodie was at it again twisting and turning to feed Russell who arrowed a 20-yard drive a white fivers breadth over the bar. On 35 mins James, having another Viking style performance at right back, surged forward sending a chip down the channel that was half cleared only for Williamson to head to Hannah. He turned his man and sent a superb cross-field ball to Litchfield. Brodie outfoxed full back Francis only to be denied by a finger-tip save from Singh and the marauding Morrison pounced to hit another hay-maker into the roof of the net.

Despite heroic endeavours in the pouring rain from both sides it took until the 65th minute for a fifth. Wilder put in a delicious cross and Yafai's looping header was just too good for Allinson to claw it away. At 3-2 it was anyone's game. Five minutes later Green, playing a blinder again, sent a 40 yard ball along the left hand flank. Hannah used all his skill and technique to beat two before driving a bobbling ball into the 3G to bemuse Singh but not the crossbar.

On 71 super-sub Shane Clark roared down the right, bemused two men twice, before sending in a low cross that Hannah coolly glanced home at the near post. He's clearly enjoying his role as a player and celebrated by joining the fans to dry off in the covered end. Another lightning four man move turned defence into attack but Litchfield's shot curled inches wide of the far post. The poacher then turned provider squaring to Russell to sidefoot home for five from 12 yards on 76.

Four minutes later the gung-ho end to end contest saw Tamworth get a third. Another delightful angled cross from Kaziboni found the classy Creaney who coolly volleyed home from 8 yards. Moments later Hannah again went close with a chipped volley just wide of the post after a great ball from Middleton. The midfield play-makers passing and vision have certainly been a valued contribution over the last two games with runners giving him more options. Litchfield would have the final say in this one but Singh saved well thanks to the young lads tiring legs.

Confronted with a side top of the pile in the Southern version of the BetVictor Premier system, which has more steps than a terrace, Trinity reasoned attack to be the best form of defence. Dour Match of the Day pundits may not like it but fans certainly do. That said Manager Curtis Woodhouse stated attacking football to be his way from the off in his first interview after getting the job. He is certainly delivering on that so far, roll on Saturday.