Five of the best gave Gainsbourgh Trinity supporters the best possible Christmas present, dispatching Lincolnshire rivals, Grantham, by five goals to one on opposition turf; a score line that had the Trinity faithful purring with delight, as both Simon Russell and Curtis Morrison netted braces. There were two changes to the side that drew 0-0 with Nantwich Town on Saturday; Morrison in for Mitchell Dunne, while Curtis Woodhouse handed a debut to Gregg Smith up front, in place of a Boston loan man George Green.

Curtis Morrison saw an effort cleared off the line after good perseverance from Declan Bacon had created an opening, but it wouldn't be long for an opener - and it was the Holy Blues who struck first, Will Thornton rising highest to power home a Simon Russell left wing corner from six yards out. This immediately settled the visitors' nerves, Russell himself getting on the score sheet when he calmly dispatched from the spot after Morrison was chopped down in full flight.

Billy Chadwick then got down the right hand side, and he picked out Morrison, arriving in the centre, the flying speedster showed some nifty footwork, before lifting a neat finish over the advancing 'keeper to put Trinity 0-3 inside the opening half an hour. Grantham pulled one back, as Trinity failed to deal with the threat of Andre Johnson and his scuffed shot was turned in at the back post to reduce the arrears. Having scored, the Gingerbreads did come back into the game, but the Holy Blues kept things tight and got through to half time without any further scares. Half time: Grantham Town 1 Gainsborough Trinity 3.

Four minutes into the second period, Trinity took the game away from the home side. Craig Westcarr saw his header saved by Lloyd Allinson, the 'keeper smothering at the second attempt. From his clearance, Morrison brought the ball down sublimely from the sky, twenty yards f 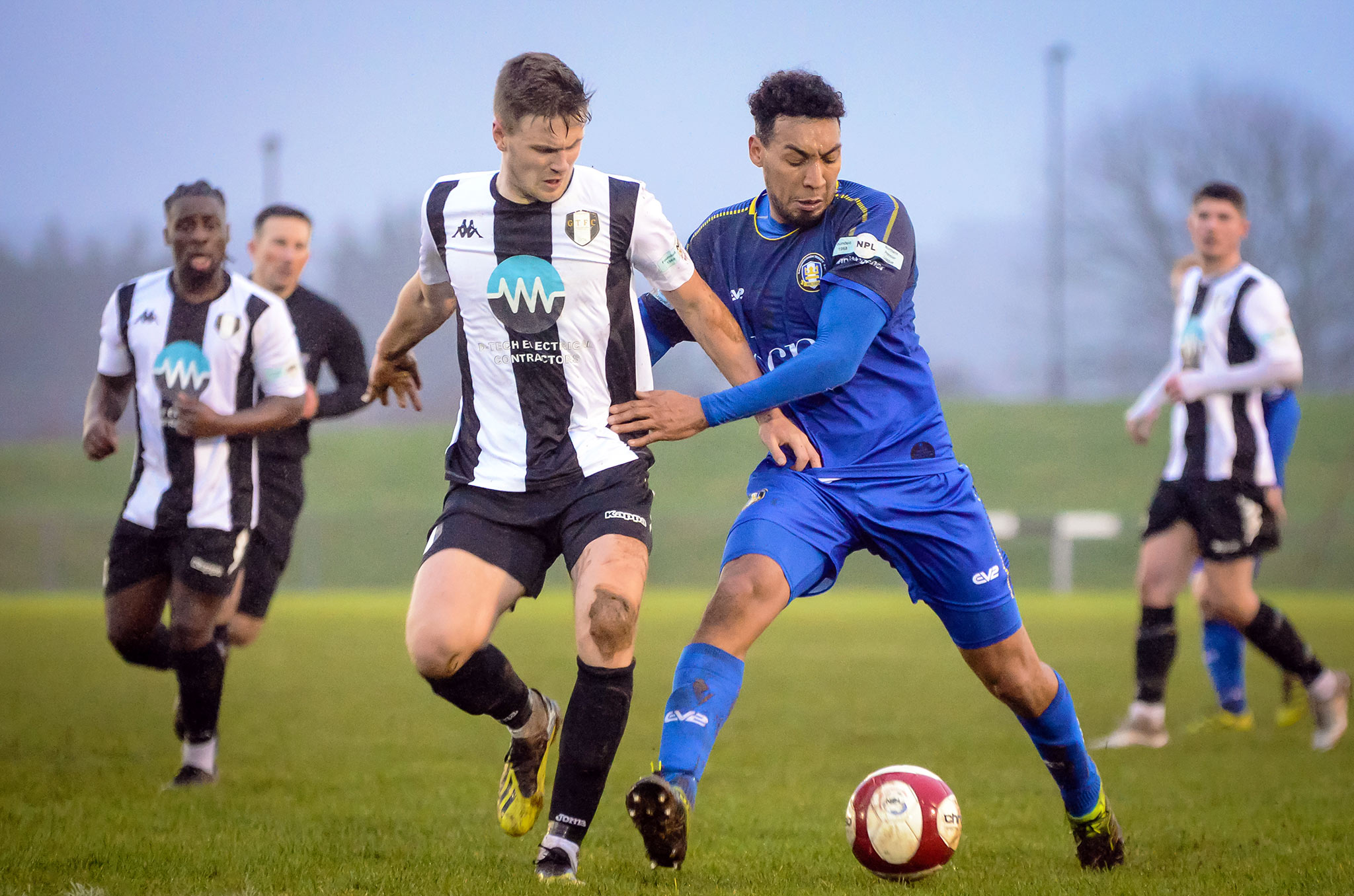 rom goal, before racing in and lifting a neat finish past Adnan Kanuric for Trinity's fourth.

With a three goal cushion, Woodhouse could afford to play it safe, withdrawing Bacon - it gave Michael Williams an outing. He was soon involved in the action. Racing onto a through ball, he got the all-important touch before Kanuric took him out and Trinity had their second penalty of the afternoon. Up stepped Simon Russell. This time he saw his effort saved, but the rebound fell to Scholsey and he made no mistake with his second bite of the cherry.

Again Grantham rallied, but this time, the Blues held firm, marshalled by Thornton and Stainfield. Allinson just needing to field a couple of long range efforts as Grantham failed to threaten, despite an aerial bombardment from Connor Bartle set pieces. Woodhouse's Blues saw the game out, having scored five in a game for the second time in his spell as manager, but more importantly, securing a first league win of his Trinity managerial career, extending the games without defeat to three; small steps, but out of the relegation spots at the turn of the year. The only way is up now... c'mon you Blues! Full time: Grantham Town 1 Gainsborough Trinity 5.