Gainsborough Trinity recorded back to back victories for the first time this season with a gritty 2-1 win over Matlock Town at the Martin & Co Arena, to start 2020 with all three points and extend their unbeaten run to four, with two wins and two draws over the festive period. Making one change to the side that had beat Grantham on Boxing Day, Curtis Woodhouse gave a start to Michael Williams against one of his former clubs, with Billy Chadwick dropping to the bench. New loan signing, Jordan Adebayo-Smith was unavailable, with his loan not officially starting until the weekend’s trip to Whitby.

The Holy Blues started the game brighter, skipper Simon Russell ruffling the side netting after good build up play down the left-hand side, before Tomas Poole looped an effort onto the bar, and Jordan Sinnott wasted a gilt-edge chance for the visitors. Marcus Marshall did brilliantly on the left to pick out Sinnott, but the onrushing midfielders’ effort lacked composure. A spell of pressure saw Trinity win a series of corners added pressure, before a partially cleared Russell corner was recycled. Williams steered the ball out to the ‘kick taker and Russell taking a touch before swinging in a delightful ball - Gregg Smith rising to open his account for the Holy Blues, giving Jon Stewart in the Matlock no chance with his close-range header.

The Holy Blues soaked up any threat the Gladiators had to offer, with the side looking more compact out of possession, Shane Clarke the only player to muster an effort, but his shot not troubling the returning Stewart. Half time: Gainsborough Trinity 1 Matlock Town 0.

Chib Chilaka was introduced for the visitors at half time, and he immediately looked to get involved, but Lloyd Allinson was out quickly to smother the danger. Adam Yates then shot from range, but his effort, much the same as Clarke’s in the first half, didn’t trouble the goalkeeper. Five minutes into the second half Nathan Stainfield was denied, hi 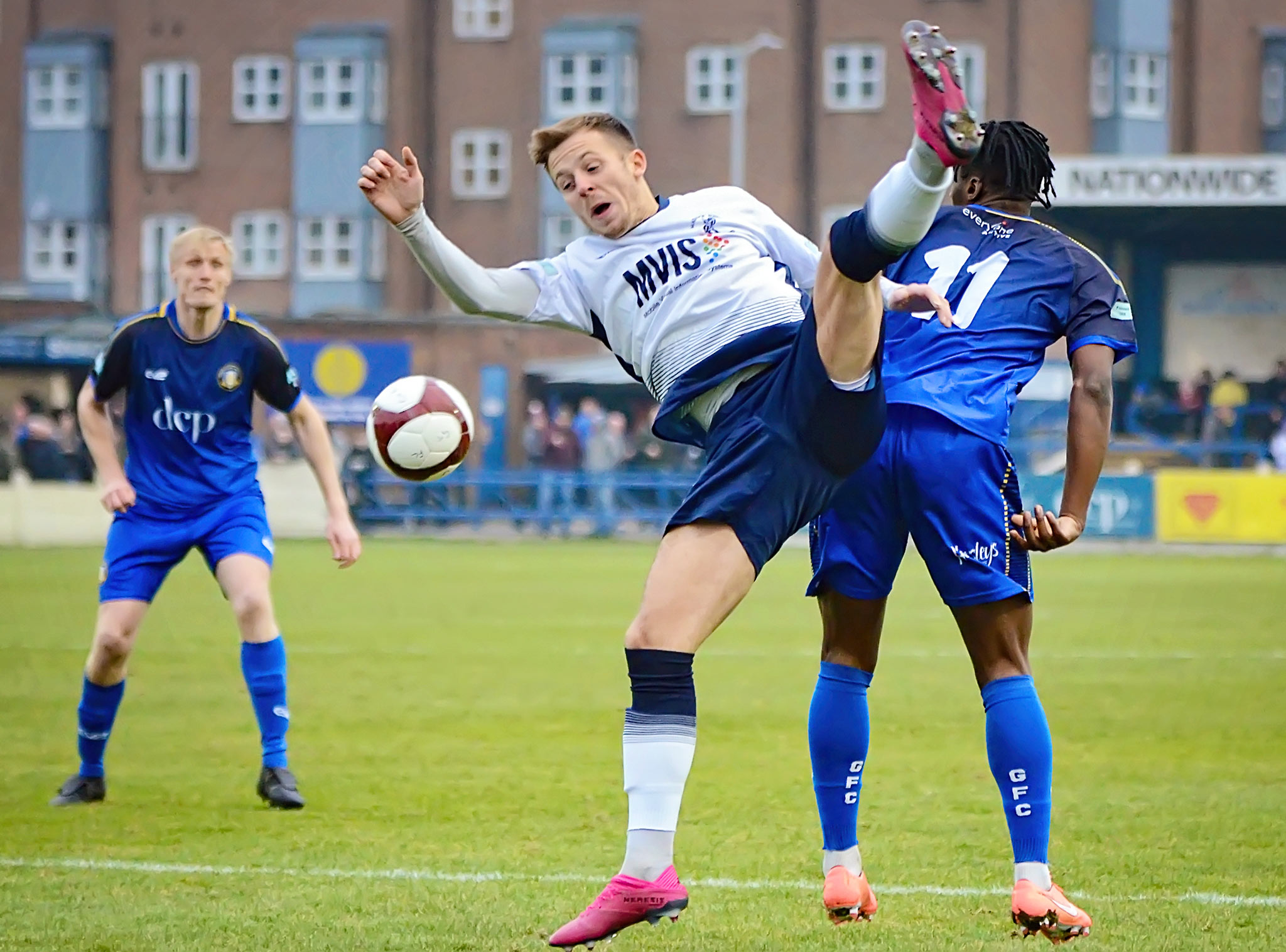 s header bringing out a full length save from Jon Stewart to keep the score line within one. This gave the visitors fresh impetus, and with more of the ball, began to ask more questions, but it was Stewart again who was called into action after Curtis Morrison escaped down the left hand side, with the angle against him, the former Trinity ‘keeper was able to keep out Morrison’s lifted attempt.

Declan Bacon then profited from a poor defensive header by Spencer Harris, Gregg Smith guiding a superbly weighted header into the path of Bacon. The former Bottesford hot-shot raced through on goal, but struck his effort too well, his effort whistling half a yard wide of Stewart’s right hand post, with the ‘keeper beaten. Almost instantly, Trinity were pegged back. Adam Yates surged forward from right back and delivered a high hanging ball to the back post, which former Everton youngster Dan Bramall, on as a first half substitute, guided the ball past the exposed Allinson.

Three minutes after being pegged back, the Holy Blues re-established the lead. But not before Stewart had made another fine save, this time denying Mitchell Dunne. Trinity recycled the ball, with Gregg Smith having the presence of mind to slide in substitute Dunne who rifled home to the joy of the home crowd, his fierce effort this time, giving Stewart no chance. Matlock rallied, but with Stainfield and Thornhill imperious at the back. Trinity weathered the storm. And Trinity survived a final scare, when Luke Dean dragged his shot, through a crowded box, wide of the near post - holding on to, secure a value three points. Full time: Gainsborough Trinity 2 Matlock Town 1.