The Trinity train departed Bower Fold with a bounce as Curtis Woodhouse's Blues battled back from a goal down at the break, scoring twice in three second-half minutes to secure three points and extend the unbeaten streak to ten league games. Moving up a place to 15th place in the process, whilst reducing the points gap to single digits (9 points) off the final play-off spot in the BetVictor Northern Premier.

Woodhouse made just one change to the side that had beaten Basford by a single goal on Saturday, Jordan Adebayo-Smith coming in for Declan Bacon. Only able to name five loans in the match day squad, and with Simon Russell still a few days away from a return, following the departure of Ross Hannah to Cleethorpes earlier in the day, the boss settled for four bodies on the bench, happy to point out "I can only call on three anyway".

The Blues started the half brightly, with the front three of Adebayo-Smith, Nicky Walker and Gregg Smith all showing up well in the opening exchanges. Walker and Micheal Williams both had first half sighters, before Stalybridge began having more possession, asking one or two questions of the Blues' rear-guard. Alex Wiles was harshly adjudged to have fouled Adam O'Reilly, midway inside the Gainsborough half. From nearly 40 yards, Ethan Walker stepped up to thump an effort on target that dipped and fizzled, proving too hot for George Willis to handle, O'Reilly reacting first and slamming the ball past Willis.

Paddy Lacey then struck a crisp half volley off the underside of the bar as the Holy Blues were put under the cosh for a good twenty minutes. Willis was again called into action shortly after diverting the ball out, towards the edge of the box, Nathan Stainfield somehow flinging himself in the way of the rebound to d 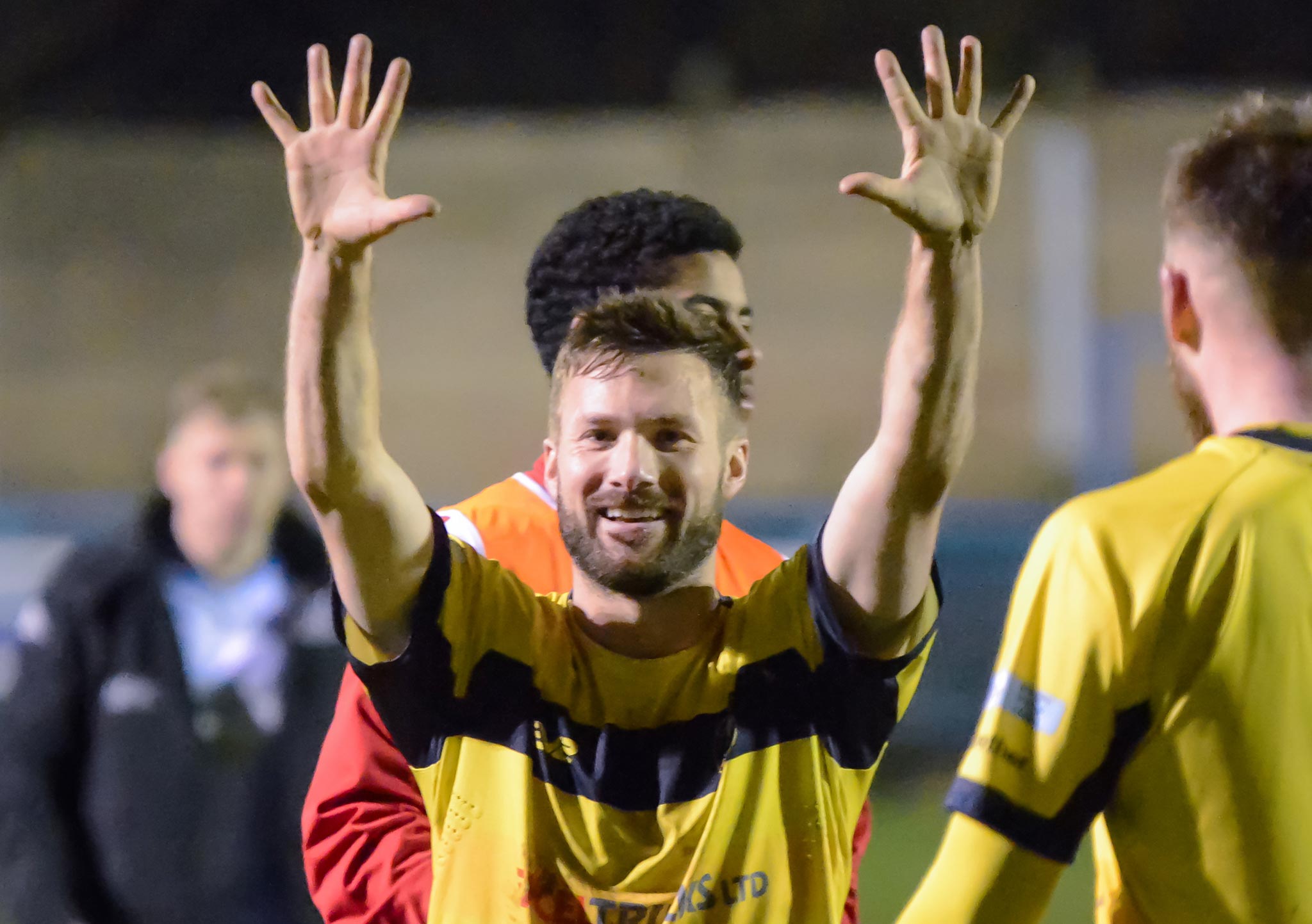 ivert the ball away. Trinity managed to get in at the break only a goal down, and quickly regrouped at the break, with the boss reinforcing his expectations. Half time, Stalybridge Celtic 1 Gainsborough Trinity 0.

Only three minutes later, the turnaround was complete. Adebayo-Smith credited with the final touch of a yellow shirt as the ball spun kindly for Gainsborough, nestling in the far corner. Like the cavalry, Trinity broke with frequent ferocity, driving up the Bower Fold slope. While the back four of James Williamson, Nathan Stainfield, Will Thornton and Green stood up well to the physical presence of Craig Hobson, who was lucky to still be on the park at full time, when he clearly lashed out at Stainfield.

Hobson did find his way into the referee's notebook a couple of minutes later when he listened a challenge on Thornton started a brief flurry of cards from the man in the middle. Kingsley James was instrumental in the holding role, breaking up play and the catalyst for many of the Blues' Viking raids up field. Positioning himself acutely, to halt Celtic's attacks, his leadership on the park allowing Williams and Wiles the freedom to express themselves.

Willis was on hand to beat out a Scott Metcalfe strike as Celtic huffed and puffed, but the Holy Blues forever looked a threat on the counter attack, only poor decision making preventing the Blues from adding to their tally. Williams shooting straight at Foitjeck with Gregg Smith crying out for the square ball, undeterred though, Woodhouse's men saw out the game - making it ten unbeaten. Full time, Stalybridge Celtic 1 Gainsborough Trinity 2.