Buxton away saw another blood and thunder performance from Curtis Woodhouse's weary warriors. Eleven unbeaten now the express train has bagged 7 points from nine in a busy week. The speedy Bucks sprang into action at the beginning of each half to press ahead and then level this 6 goal thriller, but it could not derail the Choo-Choo Blues who continue to chug along and confound the critics.

Well suited to the properties of a plastic home pitch, after having three swift one-touch moves repelled, the Bucks struck on 4 minutes with Nicholson squaring to Clarke who tapped home. Byrne then missed an open goal at the back post. Trinity regrouped, tightened the screw and in trademark style, looked to counter, winning a corner. Amidst the mêlée, Jordan Adebayo-Smith cleverly drove a shot into the pitch that took a deflection for the 10th minute leveller. Some may argue it lucky but it is the second time he has conjured such a feat in the last few weeks on a 4G surface.

Two minutes later, Nicky Walker was clean through only to be brought down by Grant Shento in the home goal. The keeper got away with just a yellow under the new ruling. On 13, Big Gregg thunders the penalty down the middle, with the keeper fortunately able to dive out of the way. The Trinity express train was running at full steam now with Walker and Williams denied by bodies on the line, being the only thing between the Bucks and oblivion.

On 28 minutes Gregg Smith, who gets less credit than he deserves, curled in a cheeky chip that flew into the far corner leaving Shenton windmilling. In the VARless world of the Bet Victor NPL those are a cross between goal of the season contender and fortune favours the brave. As a glass half full fan, Shenton deserved credit for a terrific rea 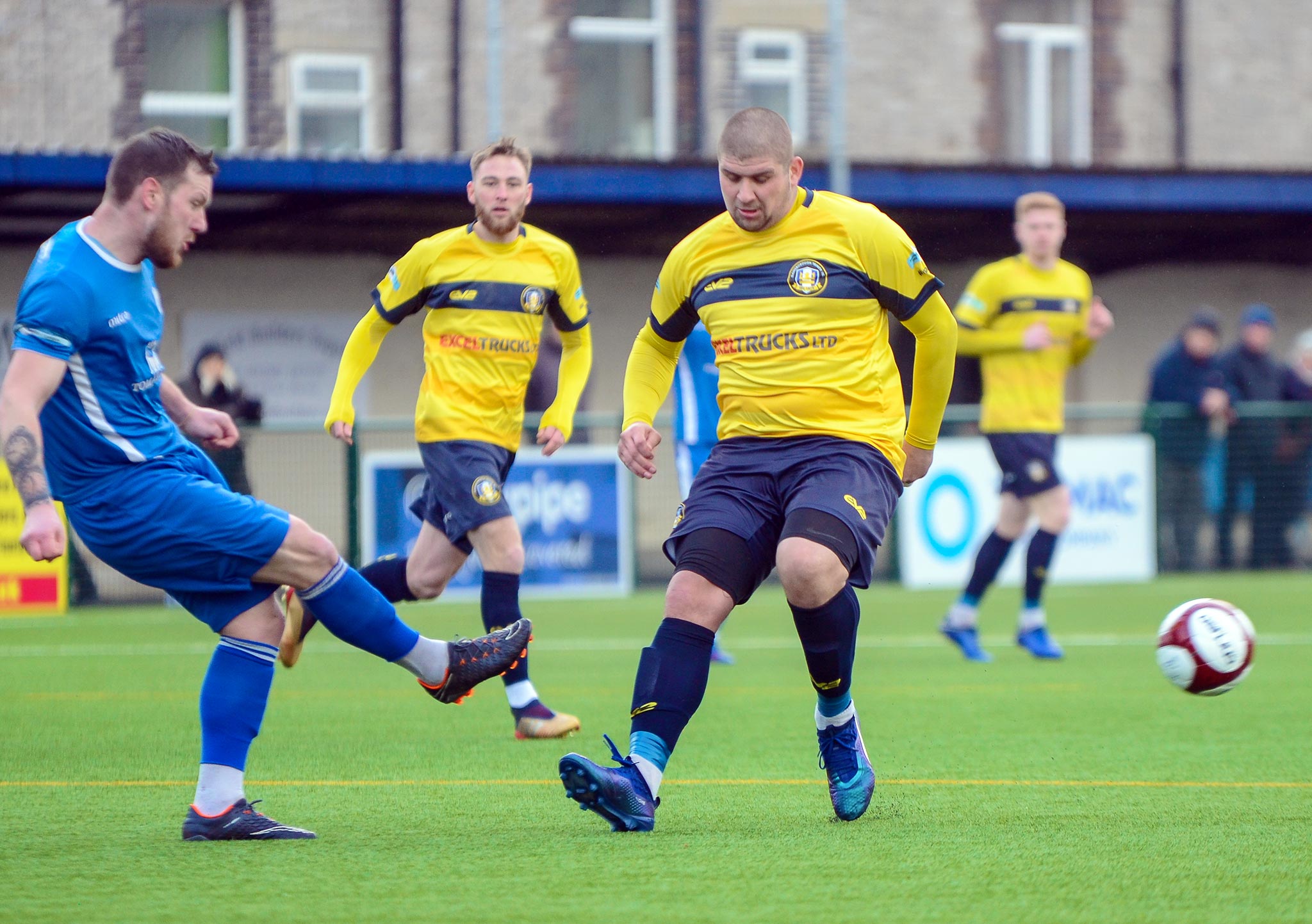 ction save from James the Viking four minutes later. James was also carded for a somewhat fierce challenge, strange given the treatment being doled out by the Bucks in a firm and physical game where irresistible force met immovable object at every second ball. Half time, Buxton 1 Gainsborough Trinity 3.

The Bucks, to their credit, started each half like stags during the rutting season. Diego DeGirlamo, a quality player who is top scorer in the division, is a poacher come gamekeeper. His run and cross to the back post allowed Curley to fizz home on 46 minutes. It was even-steven on 52 when a shot from Brown was well saved by Wills only for Diego DeGirlamo to mop up the scraps and despatch the ball into the net.

Immediately, Shane Clarke was brought on for Wiles in an attempt to stem the sudden turning of the tide as much due to battle fatigue in a three-game week. Trinity looked more solid dug deep and should have scored had Adebayo-Smith's effort not been dragged wide. The end to end game continued with last ditch challenges and bodies on the line from both sides and a world-class save from Wills to deny Diego DeGirlamo. Justice given the Holy Blues deserved a point.

We saw two of the best centre-forwards in the division today. Diego DeGirlamo gets all the praise for his smile and style, while the guts and guile of Gregg Smith, bagged a Bucks brace only to earn his usual banter from the opposition support. Fact is he may be big and round, but he doesn't lose at any ground! Like a football hero from comic book days, our modern day Hotshot Hamish is loved and appreciated at Trinity. At our famous old club from the days of yore, he leads the line for our brave heroes to believe in, follow and finish the job. Trinity are now firmly back on track cornering like they are on rails and unbeaten in eleven games. Some bounce, prior to this run, we could have been facing oblivion.

Another typical performance from the lads today; no Jekyll and Hyde side they are all determined to extend this ride. The battling Blues bloomed then battened down to ride the storm which is now battering Britain. That is what it takes in this league and Curtis Woodhouse and Martin Foster have built the train one steaming gleaming piston at a time at a speed that would impress Stephenson's Rocket. Perhaps in the former Boxing Champions image, but the yoga and bonding goes beyond that to combine body and mind. The journey started out with the unerring loyalty of the fans, but on and off the pitch everyone is buying into the belief that Team Trinity are looking upwards now instead of over their sixteenth placed shoulders.

We fear no one but respect everyone. Another massive cup final again next Saturday - all aboard, the Choo-Choo Blues - and there is still plenty of room for the townsfolk of the former capital of England to pay on the day. Bring a friend, they'll leave a fan, in it together is the plan. Full time, Buxton 3 Gainsborough Trinity 3.