Another week, another week of football for the Holy Blues who found themselves back on winning ways after three losses in the previous four fixtures, losing against Stalybridge Celtic followed by a 1-1 (9-10 defeat on penalties) to Kidsgrove Athletic in the Integro Cup and a 1-4 home defeat to South Shields, before being able to halt the run and see out a comfortable 4-1 win over Radcliffe FC in midweek. Alfie Robinson reports.

This week, the fixture was going to be arguably one of the toughest tests that have come up against the Holy Blues in recent matches in the form of Lancaster City. However, despite battling for the play-off spots, Lancaster weren’t on the best of forms. Winning 2 and losing 2 of their last 5 games coming into this fixture, their form was quite mixed which would have made the Trinity fans expect a good game. The last time that the two teams played each other, it ended up 2-4 to the Dolly Blues with Curtis Morrison and Brandon Horton getting the goals for Trinity and David Norris getting a hat-trick in what was a dominant performance from the Dolly Blues; he was to be suspended for this afternoon’s game.

Walking out onto the pitch, the fans were able to get a glimpse at the one signing that Curtis Woodhouse had made since the game against Radcliffe. 18-year-old, James Tague joined the Holy Blues from BetVictor Northern Premier rivals, Matlock Town on Friday, and he would be the 60th player this season to wear a Trinity shirt if he was picked to come off the bench in the match.

Once the game got underway, Trinity immediately started on the front foot. With Trinity playing long balls down the wings and Nicky Walker getting caught offside on a number of occasions it wasn’t going to be long until Trinity were able to get behind the Lancaster defence and ha 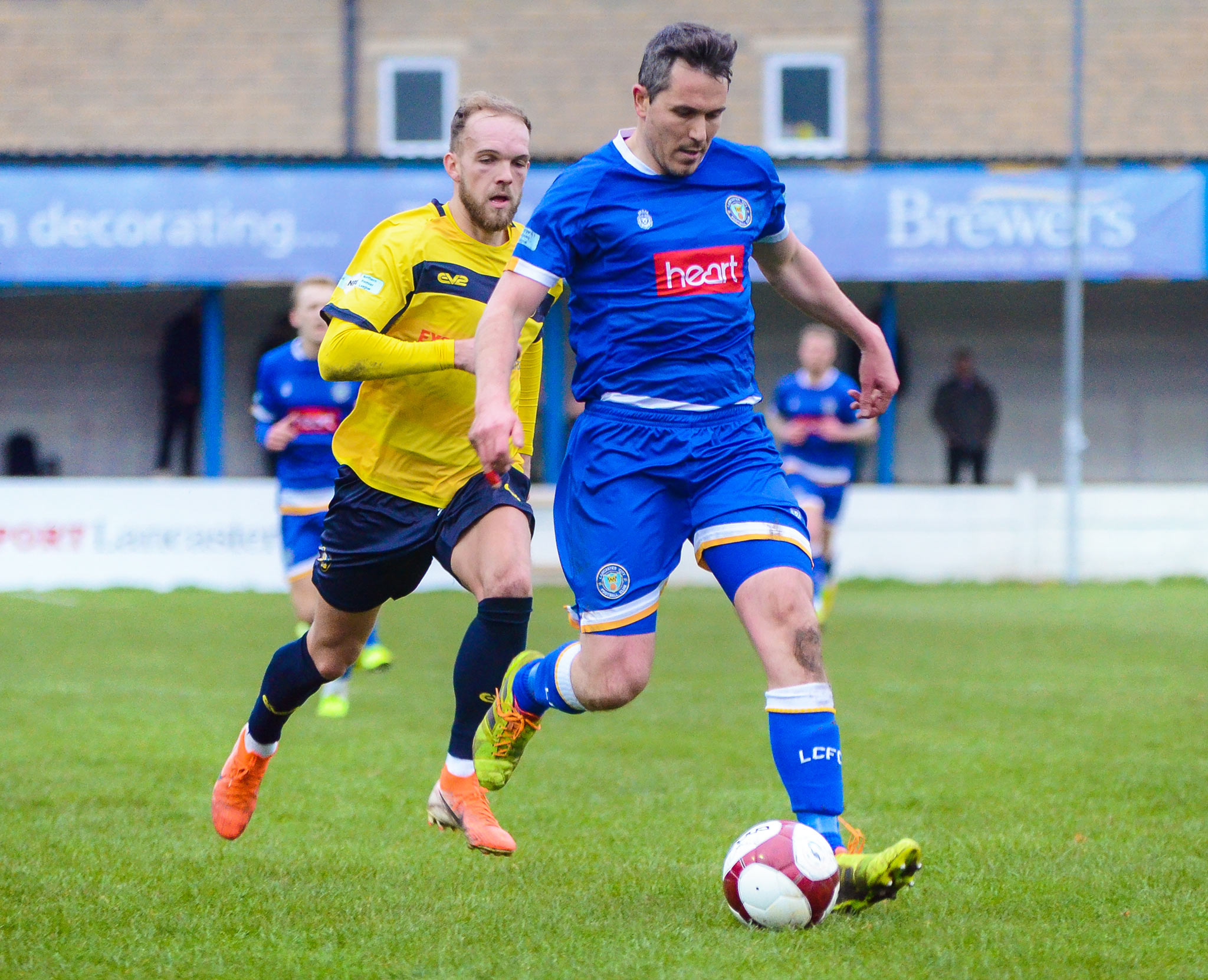 After this goal, Trinity’s confidence improved whereas Lancaster’s confidence decreased. Trinity would have been wanting to either get another goal, or just keep their one goal lead. This was showing as after the goal was scored, they began to slow the game down, happy to pass the ball around between them.

Lancaster did have some good opportunities to try and get an equaliser however these attacks didn’t prove to be as effective as they would have wanted them to have been as their build up pass was 9 times out of 10 a poor one. Trinity did avoid a scare though, when Brad Carsley headed against the post and George Willis had to be alert to make a fine reaction stop after the ball had rebounded back into play. Half Time, Lancaster City 0 Gainsborough Trinity 1.

After the break, Lancaster got a bit more involved within the match. Probably Trinity’s man of the match in the game, George Willis, was a crucial player within the second half as, just like on Tuesday night, he made some great saves to prevent Lancaster from finding the equaliser.

Trinity did get the chance to go 0-2 up. Jordan Adebayo-Smith received the ball in the Lancaster penalty. He knocked the ball past the Lancaster keeper who had come out to close him down. However, Jordan Adebayo-Smith went down. The Trinity players and fans appealed to the referee for a penalty however the referee said no penalty, play on. With minutes to go until the final whistle, George Willis made a great triple save to prevent Lancaster from getting what looked like a certain equaliser, as Curtis Woodhouse’s men navigated a tricky challenge at The Giant Axe well. Full time, Lancaster City 0 Gainsborough Trinity 1.