Gainsborough Trinity slipped to defeat in a rainy Greater Manchester, in a game that offered plenty for the 500 supporters who braved the current pandemic sweeping the nation and monsoon like conditions battering the north west. Curtis Woodhouse made three changes to the side that had beaten Stalybridge Celtic in midweek with Rod Orlando-Young coming back into the starting eleven, alongside Kamarl Grant and Barnsley youngster, Keaton Ward making his debut. Martyn Woolford & Tyler Hamilton dropping to the bench, while Harrison Foulstone left the club, following the victory in midweek.

The Blues’ boss changing the shape of his side to face Lee Fowler’s ‘Boro side. And Radcliffe settled the quicker and dominated the opening half an hour of the game, deservedly going a goal up, when Andy Owens was given the freedom of the penalty area to head past the exposed Thomas Jackson. Neil Danns collected the ball from his goalkeeper and drove forward, before Jean Louis Akpa-Akpro twisted, turning the ball out to the right, releasing Luca Navarro, who placed a pinpoint cross onto the head of Owens, who headed home unmarked.

The Holy Blues were up against it and struggling to get a foot hold in the game, right up until the home side were reduced to ten men on 28 minutes. Referee Kieran Johnson showing Raheem Hanley a straight red card for an off the ball kick out at Alex Wiles. With the man advantage, Gainsborough came into the game more, and were unlucky not to be level when Rod Orlando-Young’s effort crashed back off the near post and Reco Fyfe could not convert the follow up. Orlando-Young then turned smartly and delivered a sublime cross, which Lewis Dennison met. Thinking all he needed to do was get a touch… Cameron Belford spread himself brilliantly to block from point blank range.

Trinity were level from the resultant corner though, four minutes before half time, when skipper, Simon Ainge swept home a Keaton Ward corner to send 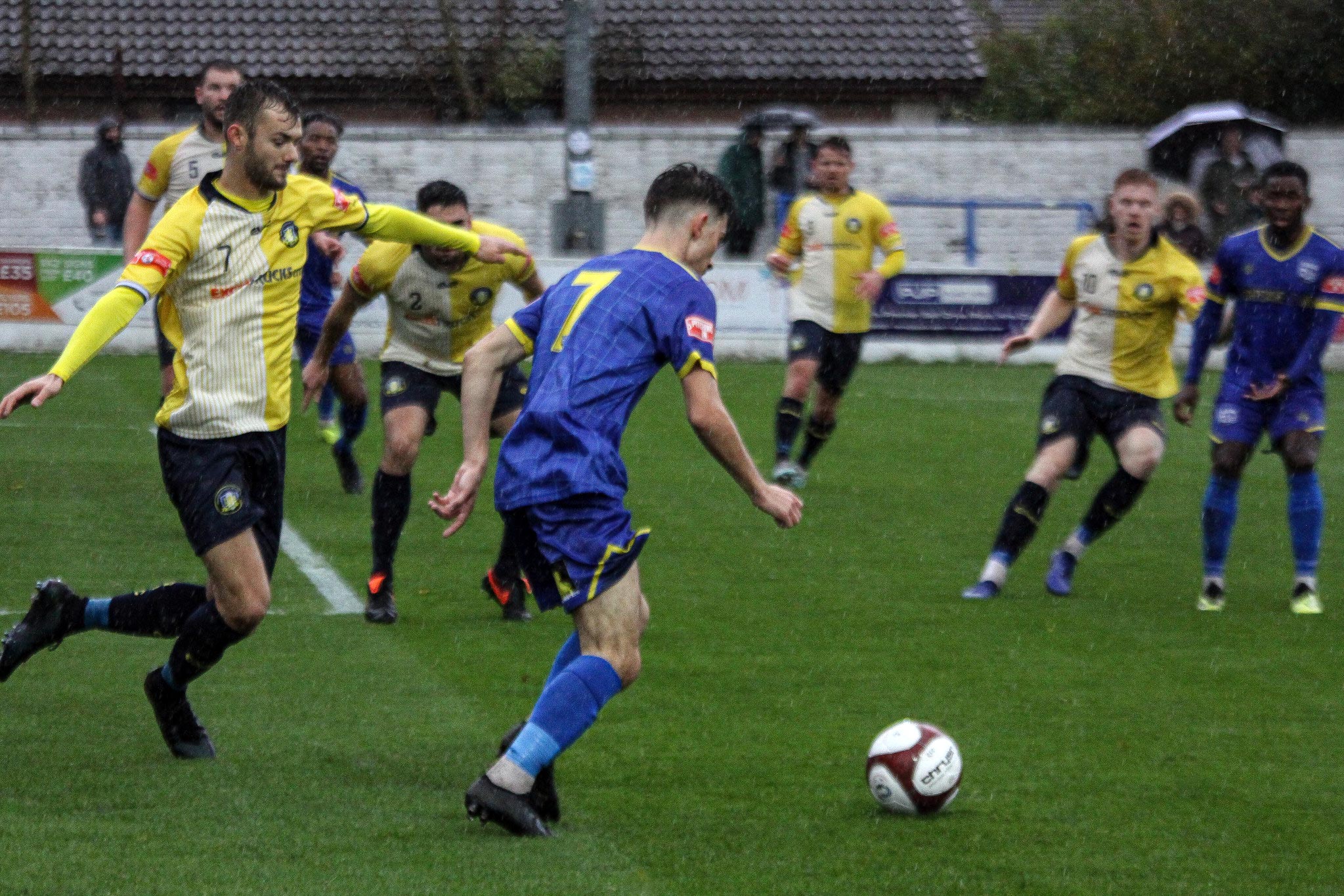 the sides in at the break level. Half time, Radcliffe FC 1, Gainsborough Trinity 1.

Woodhouse made a double change at the break, with Luke Lofts and Hamilton replacing AJ Greaves and Kamarl Grant, the boss shuffling his pack, looking to take advantage of the extra man. The Holy Blues shaded things but couldn’t find a way through a steely back line - and substitute Hamilton saw red following an ill advised reaction, with Trinity on the front foot and in a good position whilst attacking. Mr Johnson levelling the sides up with the second red card of the afternoon brandished.

Five minutes after Hamilton’s dismissal. Trinity were made to pay, as Andy Owens doubled his and Boro’s tally, seizing hold of the ball and firing in from the edge of the six yard box after Trinity failed to stop a rangey Simon Leinghan run from midfield. A give and go, falling kindly to Owens to restore the home side advantage.

As the Holy Blues upped the tempo in search of a second equaliser, Luke Lofts probed and his shot deflected out to Orlando-Young on the right, he cut inside, but shot tamely at Cameron Belford. Reco Fyfe then showed great skill to turn on halfway, and as he looked to accelerate away from two Radcliffe men, was scythed down unceremoniously, resulting in a booking for the centre half Jack Shiels. Trinity wasteful from the resultant free kick.

Neil Danns was denied a goal on his debut, Tom Jackson flinging himself to his right to deny the former Blackburn Rovers, Bolton and Tranmere midfielder from twelve yards.. Fyfe then sprayed the ball out to Orlando-Young popping up this time on the left-hand side. He skilfully evaded the challenge of Shiels who skidded in on the greasy surface before fizzing a ball into the danger zone that Belford just about dealt with.

Soon after Alex Wiles combined with Lofts. Wiles taking up the running and bursting into the box, but as he bore down on goal, he lacked the killer instinct, with Belford making himself big. Martyn Woolford’s ball was kept alive by Ainge at the back post, his header finding James Williamson, who Berkamp-esq brought the ball down, spun on a six-pence and brought out a smart save again from Belford. And from then, Boro professionally saw out the remainder of the game to go level on points with the Holy Blues, having played a game more - as Trinity slipped to 13th. Full time, Radcliffe FC 2, Gainsborough Trinity 1.