Against the run of play in the second half, skipper Simon Ainge scored the only goal of the game, to send the Holy Blues back to Lincolnshire with all three points, victory taking Trinity's early season tally to twelve, courtesy of Tuesday night's three-point haul. Injury and unavailability robbed Trinity boss, Curtis Woodhouse of options, compounded further by the late withdraw of the experienced Martyn Woolford after he picked up an injury in the warm-up.

Woodhouse was forced into selecting four teenagers in the starting eleven and handing a debut to Ryan Campbell at full back, and he wasn’t to be disappointed as his young charges battled manfully, returning home with the spoils. The home side started brightly as Adam O’Reilly caught an effort sweetly after Trinity struggled to clear a deep ball into the penalty area. But Tom Jackson was untroubled as the ball fizzed over the bar. The Holy Blues, with skipper Simon Ainge in the number nine role, then tested Hudson in the home goal, before Luke Lofts was denied from an acute angle, after a ghosting run saw him past two, in the blink of an eye.

Jackson was called into action soon after, parrying away Rowan Roache’s volley that was struck low and true. Earning his corn, the Trinity stopper then got his fingertips to the ball, to deny Isaac Sinclair. A minute before the break, Tyler Hamilton forced a fine save from Matt Hudson, before Tom Jackson was again on hand, denying Sinclair on the stroke of half time as he smothered the danger and ensured the sides went in level. Half time, Bamber Bridge 0, Gainsborough Trinity 0.

Again, Brig started the second half brightly, but a failure to take their chances came back to haunt the home side. Against the run of play, a neat passing move saw Hamilton fashion a chance, only to see his effort flash half a yard wide 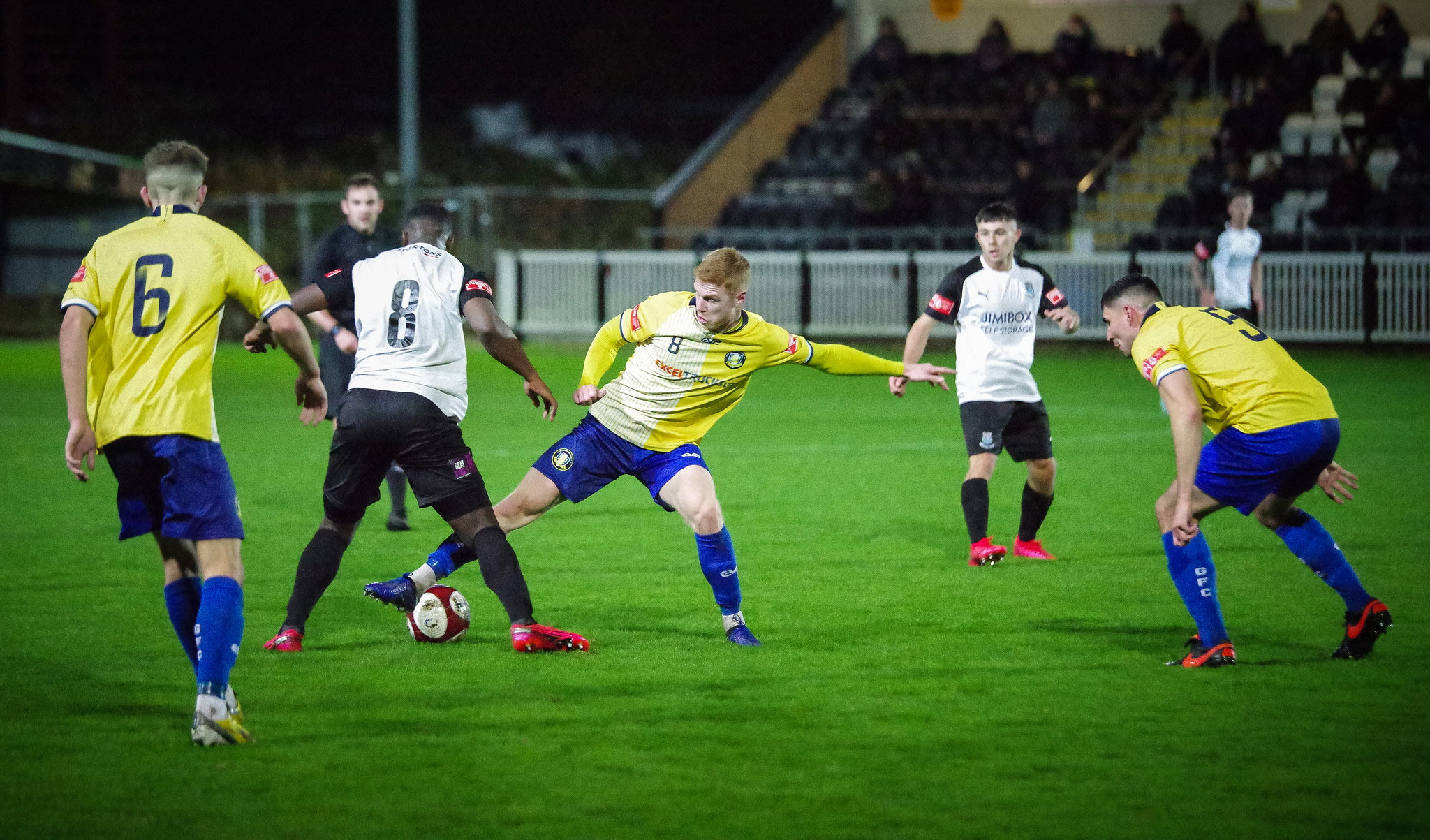 of Hudson’s left hand upright. Danny Forbes then struck the post just before the hour mark, his well hit shot rebounding out of play for a throw in, with Tom Jackson beaten.

A low ball into the Gainsborough box was only partially cleared and through a crowd of bodies, Macauley Wilson's long-distance effort found its way through a packed penalty area, cannoning back off the upright. A quickly taken corner found Matthew Flynn, whose half-volley was tipped over by Jackson, as he continued to keep Brig at bay.

In what proved to be a largely one-sided half, that saw the young Trinity absorb untold pressure, ten minutes from time, Simon Ainge netted his second in two games. Capitalising on an error from the otherwise impressive home custodian, Ainge got the ball 25 yards out, took a touch and swivelled to arrow the ball high into the unguarded goal. A moment of quality from the Holy Blues’ number nine, and a moment of quality worthy of winning any game of football.

The Blues, with a lead to defend, then saw out the remainder of time. Holding out to secure three massive points in the Pitching In Northern Premier League. Full time, Bamber Bridge 0, Gainsborough Trinity 1.