A crazy 72 hours in the build up to the opening day of the PitchingIn Northern Premier League season, as Head Coach Tom Shaw had more headaches than he could imagine, with the loss of club captain, Lewis Carr, last weekend’s two-goal hero Javon Makama and wing wizard Toby Gould all missing out on Shaw’s maiden team sheet. Not to be deterred, the boss was able to select a strong squad, despite the first eleven averaging 22.6 years of age.

The visitors lost Rob Hopley just after the half hour mark, with Danny McKenna replacing him. With little time to adjust to the speed of the game, the substitute was quickly closed down by Kyle Dixon (taking the armband in the absence of Carr) and he released Wollerton down the right. The exciting forward got to the by-line and slid the ball across the face of goal, with Morrison making the movement across the front man to claim the opener and send the majority of the 652 in attendance into a frenzy.

Looking assured at the back, Hayden Cann and Callum Minkley were both comfortable on the ball and belied their years, providing the foundations for the Holy Blues to build from. Matt Yates in the Gainsborough goal had to be at his best to deny Hooper, bravely blocking at the forward’s feet, but the scores were level when Trinity were pegged back on the stroke of half time, Nathan Woodthorpe turning home at the back post from a James Hooper corner. As everyone appeare 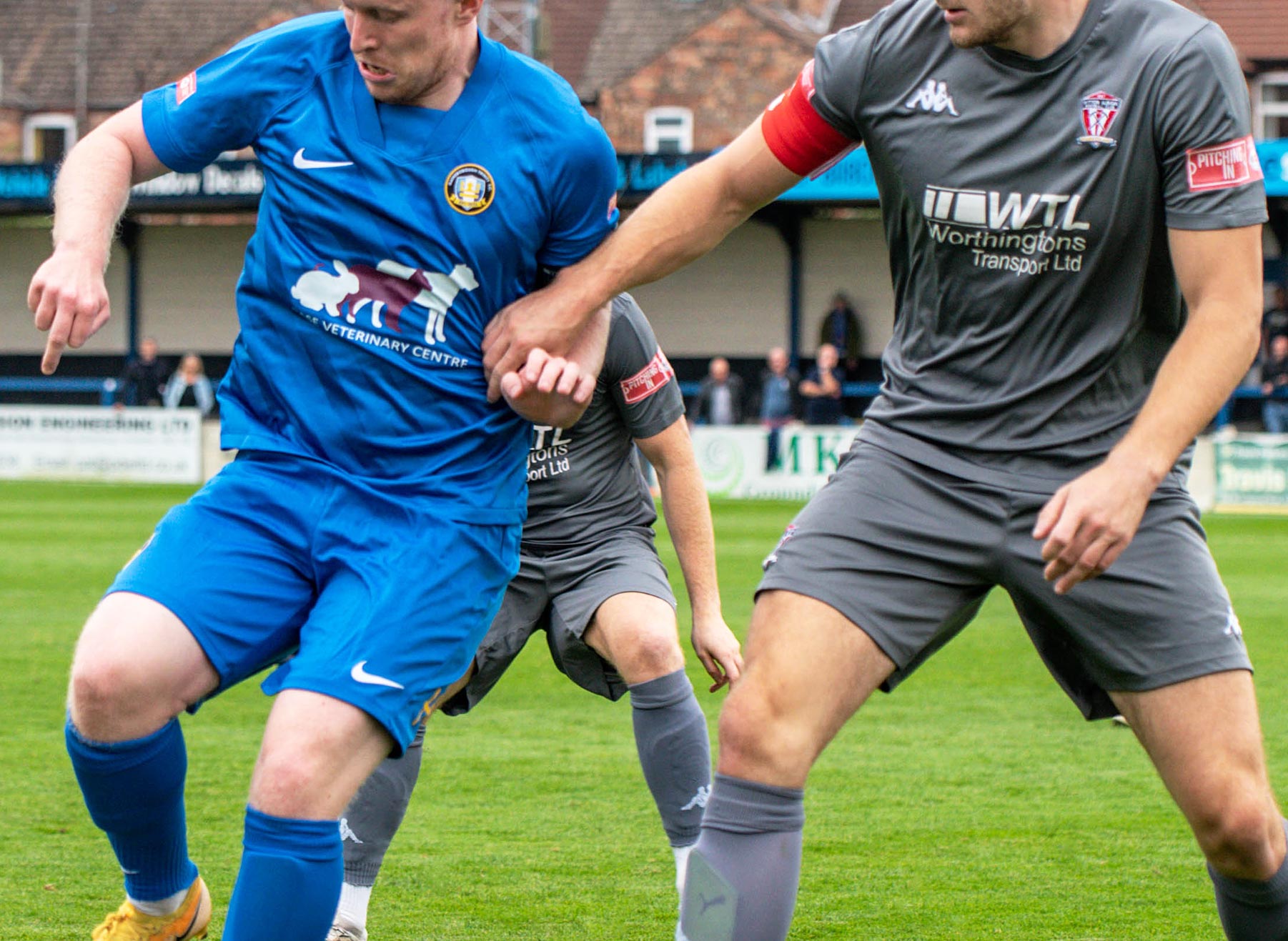 d to stop and wait, for the referee’s whistle, it wasn’t forthcoming and the score line was level. Half time, Gainsborough Trinity 1, Witton Albion 1.

Playing good football, Trinity looked assured on the ball and controlled long periods of play with patient football, Joe Wilson was a constant threat down the right hand side for the hosts. Linking well with some lung busting runs from full back. And it was one such run that drew the attention of the goal scorer, Woodthorpe. The full back picking up the only yellow card of the game, scything down Wilson on the halfway line.

A lifted ball through the middle found Jawad Jebrin, but his lofted effort drifted onto the roof of the Gainsborough goal, a momentarily lapse in the backline, and a let off, but one that again sparked a forward momentum for the Holy Blues.

Referee David Jones had little hesitation in pointing to the spot, when Curtis Morrison was felled in the box by Will Sutton. Captain Dixon stepped up to take, but lifted the ball over the bar from twelve yards. A goal the youthful Blues would have deserved on the balance of play.

A mesmerising turn and spin from Morrison left several Albion defenders in his wake, only to see his progress halted by a strong last ditch tackle, putting the ball out of play for a corner kick, that the Holy Blues were unable to profit from.

Trinity then saw out a late Witton push and defended resolutely against a number of long throws into the heart of the penalty area. Yates, back-pedalling, needing to comfortably tip one late header over his cross bar. And Jack Gibson defending from the front, making the most of his 6foot 4 inch frame to repel the danger. Late on, Shaw was forced into one final change, when Morrison had to be replaced. Failing to run off the after affects of a strong challenge.

A short back pass deep into injury time by Steve McNulty was nearly punished, when substitute Jock Curran nipped in ahead of Greg Hall, but he was unable to steer the ball into the unguarded goal and Trinity had to settle for a point.