Hit by injury and illness, Head Coach Tom Shaw was forced into five changes to his young squad, with Neal Bishop and Kyle Dixon missing out. In addition to Curtis Morrison who limped out of Tuesday’s Mickleover defeat and Lewis Carr and Jovon Makama, absent since injuries picked up in training on the eve of the season. The side Shaw named averaged 21 years of age. And unfortunately, just four minutes into the game the young Blues found themselves behind.

Switching off from a throw in. Brig right back, Callum Spooner got himself to the by-line before cutting back for Isaac Sinclair to turn home at the near post. Lewis Butroid raided forward down the left hand side, on debut for his home side club, but his low centre was cut out by Matthew Flynn and Brig raced down the other end and doubled their advantage on sixteen minutes when Ewan Bange crossed for Sinclair who breezed past his man, before setting up Bange to curl a left footed effort from the edge of the box, into the bottom corner. Yates getting fingertips to the ball, but not enough to divert the rangey strikers’ effort round the post.

Midway through the half, a flowing Brig move saw Robert Apter through on Yates’ goal, but the young ‘keeper spread himself brilliantly to keep Trinity in the game.

Four minutes from the break, a foul midway inside the Trinity half led to the third goal as Gainsborough failed to clear defensively. Eventually the ball falling for right back Spooner to score the easiest of tap ins at the far post after a trio of crosses across the face of the Gainsborough goal weren’t dealt with, the visitors were finally punished. Mark Yeates threatened to heap more woe on Trinity before the break. Jinking past a couple of challenges, he couldn’t find a way past the Gainsborough ‘keeper, out bravely to block at his feet.< 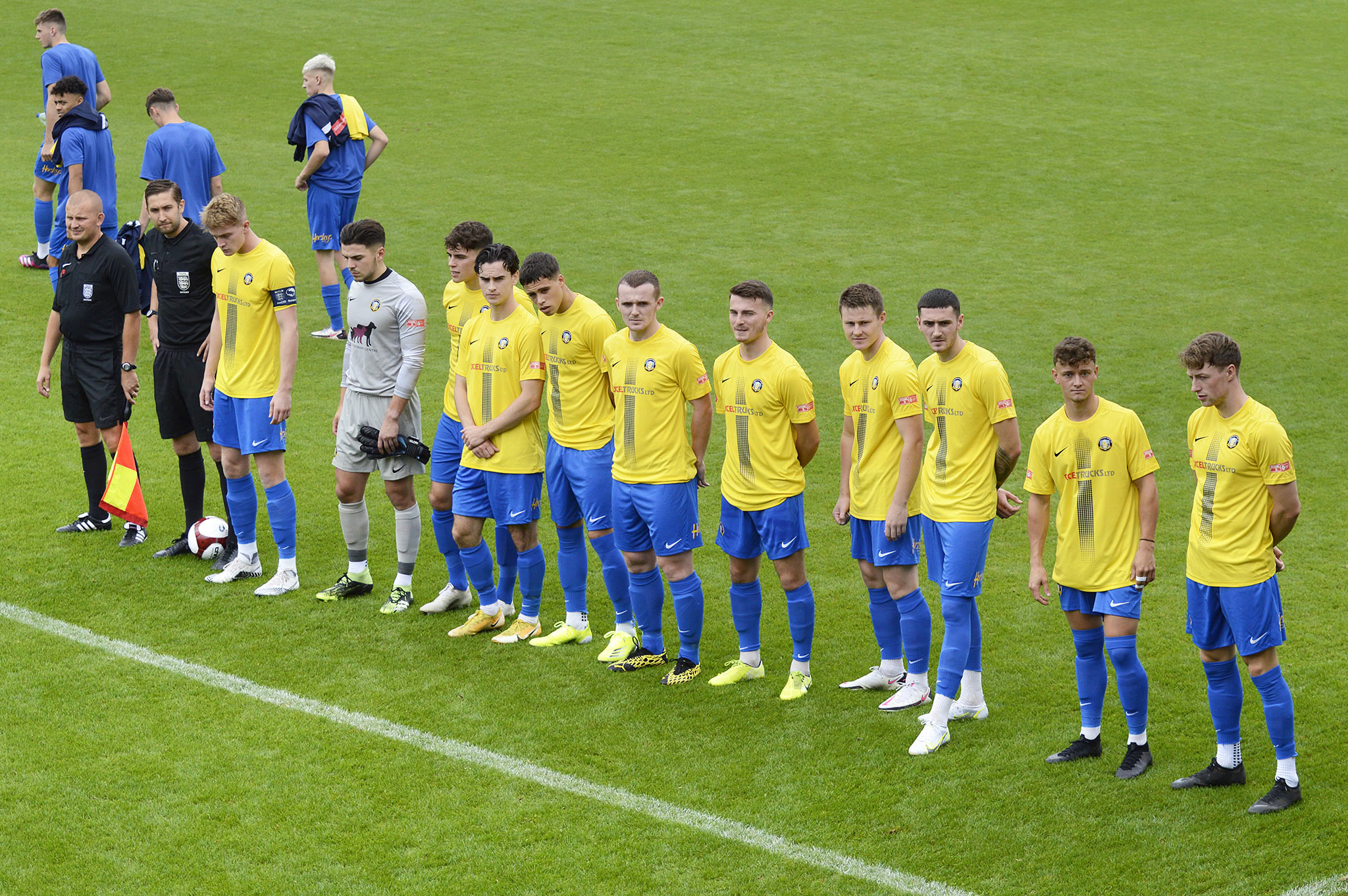 Inside thirty seconds of the second half, it was 4-0 as any words of encouragement, or any plan of attack was quickly forgotten. A throw in, down the line, found Apter and the tricky number seven cut in from the Trinity left, to curl a left footed finish past the despairing dive of Yates in the Gainsborough goal. If the game looked over as a contest at half time, it was now.

Trinity made changes soon after the fourth, and granted did look better with Alex Wollerton, Joao and Hayden Cann all thrown into the fray before the midway point in the second half.

Before taking his leave, Ben Morris stung the palms of Danny Roccia in the Brig goal. His effort from range proving too hot to handle in a rare moment of attacking quality for the Blues, just before the hour mark.

At the other end, Apter tried an audacious chip, that had Yates back pedalling before making the fingertip save to turn the ball to safety.

Roccia then made a double save to deny Joao and Gibson after Gianluca Bucci had released Wollerton down the right, the ball just not falling for the visitors. Jack Gibson stooped to head home from a Cieron Keane right wing corner, but the hosts soon restored their four goal cushion, when Brig substitute Matthew Dudley was given the freedom of the six yard box to smash home emphatically from Robert Apter’s low right wing centre.