A third defeat on the spin dampened the mood at The Gainsborough Martin & Co Arena in front of a crowd of 552. The anticipation following an opening day point against Witton Albion still springs eternal, with patience aplenty for this young side, supporters hopeful of turning current fortunes around. With this the first of two home games on the bounce and as absentees begin to return to the side, hope springs eternal.

Gainsborough Trinity Head Coach, Tom Shaw made four changes to the side beaten 5-1 away at Bamber Bridge on Saturday, welcoming back experienced trio, Neal Bishop, Kyle Dixon and club captain Lewis Carr to the starting line up. Recent signing and former Sheffield Wednesday academy graduate Isaac Rice also made his first start having missed out at the weekend.

An even opening half an hour saw little in the way of goal mouth action with the Holy Blues matching their higher placed opponents. With neither goalkeeper really troubled, it was to be the visitors who had the break through on thirty-three minutes, Thornton rising highest at the back post to power home a right wing corner. The visitors doubled their lead thirty seconds later when Trinity switched off straight from kick off and Michael Coulson finished past the exposed Matt Yates in the Gainsborough goal after a cleverly improvised flick from Kieran Glynn. Appeals for offside muted, the flag stayed down and the Holy Blues had an uphill battle. Half time: Gainsborough Trinity 0 Scarborough Athletic 2.

Alex Wollerton on at the break for Kyle Dixon started the half brightly and was involved in a slick attacking move that saw Jack Gibson bundled over off the ball by opening goalscorer Thornton. The centre back picking up a yellow card in the process. Initially, the referee appeared to point to the spot, o 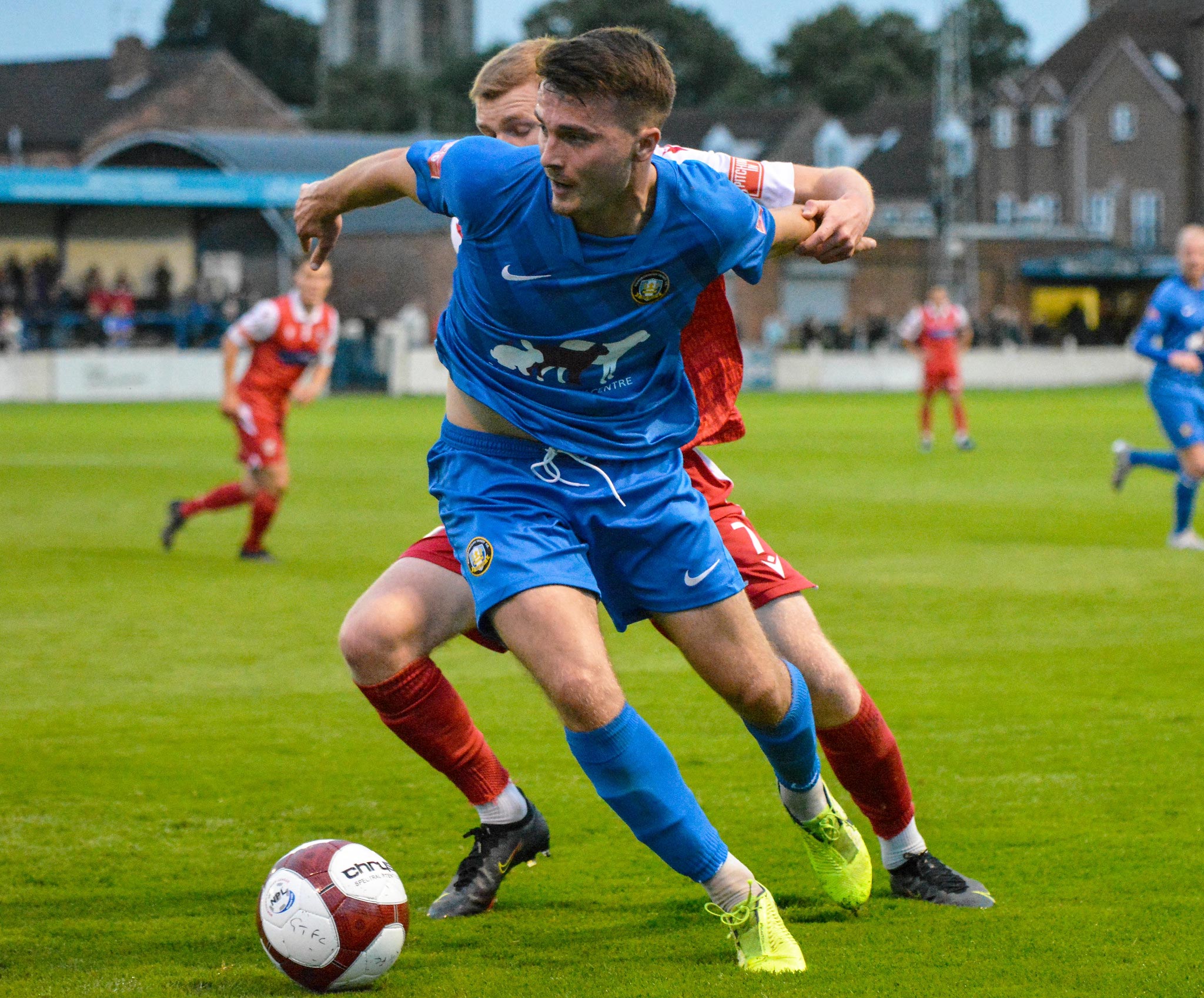 nly to seemingly change his mind. Cieron Keane struck the resultant freekick into the Seadogs wall. Trinity huffed and puffed as they tried to reduce the deficit, and the visitors were indebted to their goalkeeper who produced a save of the highest order, tipping an effort destined for the top corner over the bar. Toby Gould and Joe Wilson combined to tee up George Hornshaw who saw his effort bending away from the ‘keeper spectacularly denied.

Trinity had more bite across the park and a clearer collective purpose, though the visitors still looked dangerous on the counter attack. Coulson causing problems for the visitors with some clever link play.

Visiting ‘keeper Whitley preserved his side’s clean sheet eight minutes from time, bravely smothering at the feet of Rangel from a low Rice centre. At the other end, there was still time for late substitute, Lewis Gibson, to force a full length save from Yates.

But now attentions turn to the weekend and the visit of Whitby Town to the Northolme. Can the Holy Blues pick up that first elusive win of the season and then from small acorns, do big oak trees grow.