Gainsborough secured their first three points of the season with a fine one nil victory on a sunkissed afternoon in Lincolnshire, seeing off the threat of high-riding seasiders Whitby Town. Toby Gould the goalscoring hero on a day where Trinity’s young guns came of age, producing the complete performance. Making three changes to the starting eleven that lost in midweek to Scarborough, local lad Lewis Butroid came in for his home debut; Alex Wollerton returned to the starting line up in place of Kyle Dixon and there was a debut for Nyle Blake a forward signed late on Friday afternoon, in for Jack Gibson.

Early Whitby pressure was withstood, with skipper Lewis Carr marshalling the back line and leading by example. And with Butroid and Joe Wilson raiding in tandem down the flanks, the Holy Blues looked a threat. Just past the quarter hour mark, Bradley Fewster worked himself half a yard of space and curled an effort towards Matt Yates’ bottom left hand corner. Plunging low down to his left, the ‘keeper made a fine save.

From the resultant corner, Trinity broke. Neal Bishop released Nyle Blake, and at pace he got away down the left hand side, cutting in, the blistering forward had the presence of mind to tee up Gould who had the simplest of tap ins at the back post. Toby Gould netted his first career goal, tapping in at the far post to settle home nerves, before the resplendent Blues dug deep to protect their goal, preventing the visitors from ever really threatening Yates’ goal after going behind

Goalscorer Gould almost turned provider when he initially looked to have over ran the ball. Up from left wing back, Butroid made room to shoot, bringing a save out of Shane Bland at his near post. It would have been a dream home debut for the Gainsborough native; unfortunately he wasn’t too add a goal to a game his all round play would have deserved. Gainsborough were strong at the back, Callum Minkley imperious despite needing extensive treatment midw 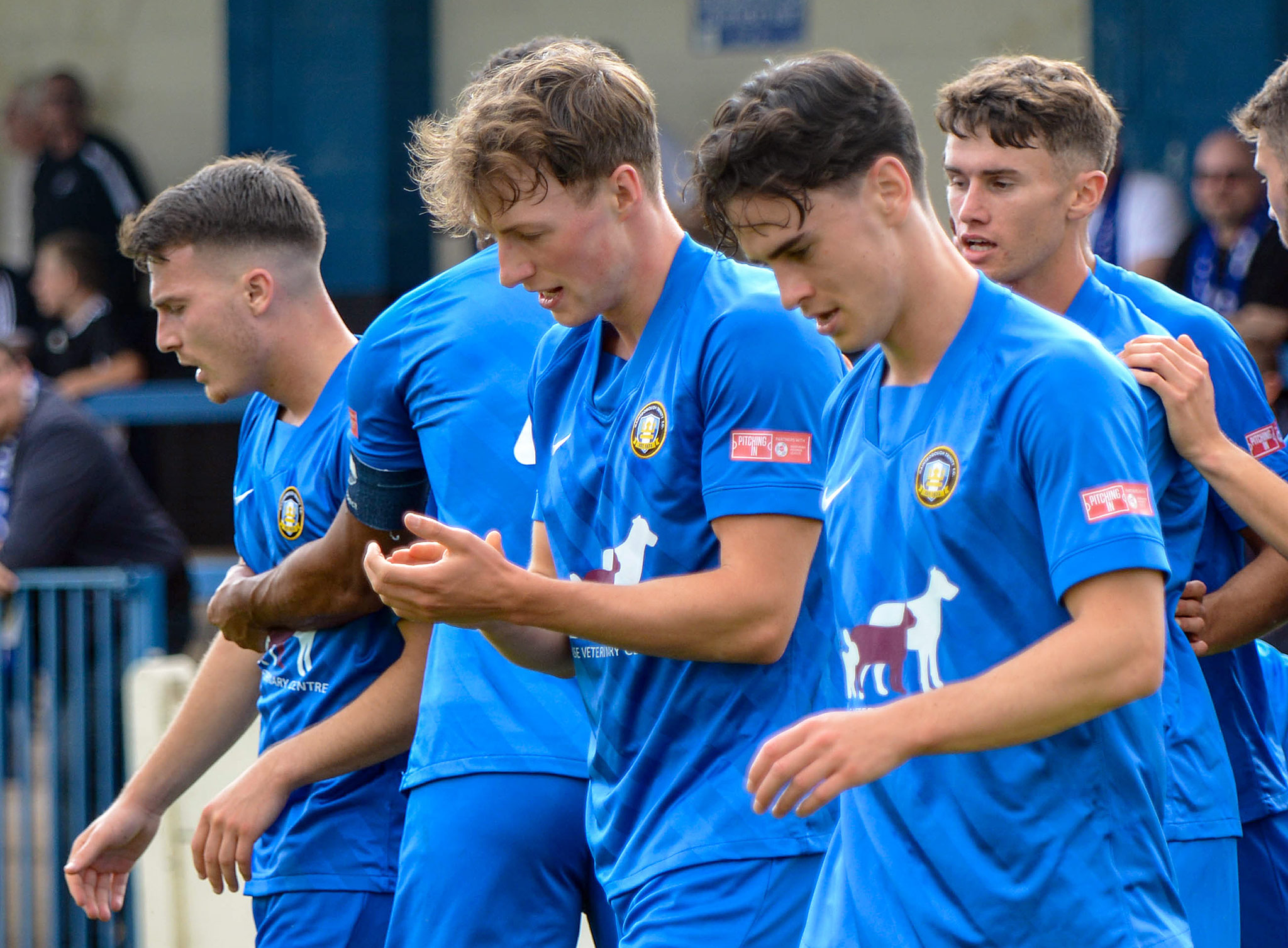 ay through the first half and sporting a Terry Butcher bandage. The former Derby County youngster superbly handling the threat of Hazel and Fewster.

Full of attacking intent, Trinity looked exciting going forwards, but at times lacked the final ball, whereas the visitors were restricted to shots from range. Bishop, Wollerton and Hornshaw providing the platform in the middle for the Holy Blues to compete. A neat backheel from Bishop played in Wollerton, who took a shot on early, only to see his effort charged down. Moments later, a Bishop, Wilson one-two sliced open the visiting defence, but the last past was half a yard ahead of the veteran midfield general. Half time, Gainsborough Trinity 1 Whitby Town 0.

Trinity started the second half in the same vain as they had finished the first. Wollerton and Wilson taking the fight to Whitby down the right hand side. Wollerton’s centre finding Gould, but he couldn’t find a finish from ahead of the near post. Whitby rolled the dice three times as they tried to get back into the game. But the defensive unit stopped any clear sights of Yates’ goal.

Minkley’s raking ball forward was chested down by Blake who combined well with Gould to go racing through on goal, but under pressure by the retreating Whitby man, Gainsborough’s number nine pulled his shot agonisingly wide of Bland’s right hand upright. A Priestley Griffiths snap shot the closest the Seasiders came to Yates goal, but his right footed rising effort flashed wide of the target with Blue bodies scattered in the way.

Ever threatening, Wilson at times playing as a winger couldn’t beat the first man with a cross, but again took up the running and stung the palms of Bland with an effort from a narrow angle as he looked to join Gould on the mark for the home side. With Gibson and Dixon on in the closing stages, Trinity saw out the game comfortably to secure a well deserved victory, and three important points heading into Bank Holiday Monday’s clash with Matlock Town. Kick off at 3pm in Derbyshire. Advance warning of major roadworks within the vicinity, so please be sure to travel in plenty of time to afford these young Blues the support they deserve!