Gainsborough Trinity fell to defeat on Bank Holiday Monday with a 3-0 loss to Derbyshire outfit Matlock Town, meaning the Holy Blues had to be content with just the three points from two games in three days. Forced into two changes due to injury and unavailability, there was a return to the starting eleven for seventeen year old Hayden Cann (replacing Callum Minkley, who sported five stiches from his head injury sustained in the victory over Whitby) and Jack Gibson, in for the unavailable Nyle Blake.

Trinity got off to the worst possible start inside ninety seconds, when Declan Walker’s cross was helped on by Liam Hughes, for Jerome Greaves to convert past the exposed Matt Yates in the Gainsborough goal. Referee Elliot Kaye waved away a foul on Trinity’s Jack Gibson by Jamie Sharman as he raced through on goal, from Toby Gould’s clever ball around the corner. A decision that angered the Trinity support. A decision that could have changed the course of the game, but in truth, probably didn’t alter the end outcome.

On the quarter hour mark. Gibson won a foul twenty yards out to the left of centre. Lewis Butroid stepped up and beat the wall, only to be denied by a strong Shaun Rowley right hand, before George Hornshaw was unable to pick anyone out in yellow with his cross on the follow up. Matlock clearing the danger for a corner. A second free kick from Butroid cleared the wall, but found the head of Ryan Qualter who diverted the ball away from goal, as it looked set to call Rowley into action again.

Midway through the half, Gainsborough’s afternoon went from bad to worse when Lewis Carr went off injured to be replaced by Gianluca Bucci. With the visitors still adjusting to the loss of their influential skipper, Matlock doubled their lead, Greaves headed home, unmarked, from Alex Byrne’s right wing centre. The former Trinity man with the ass 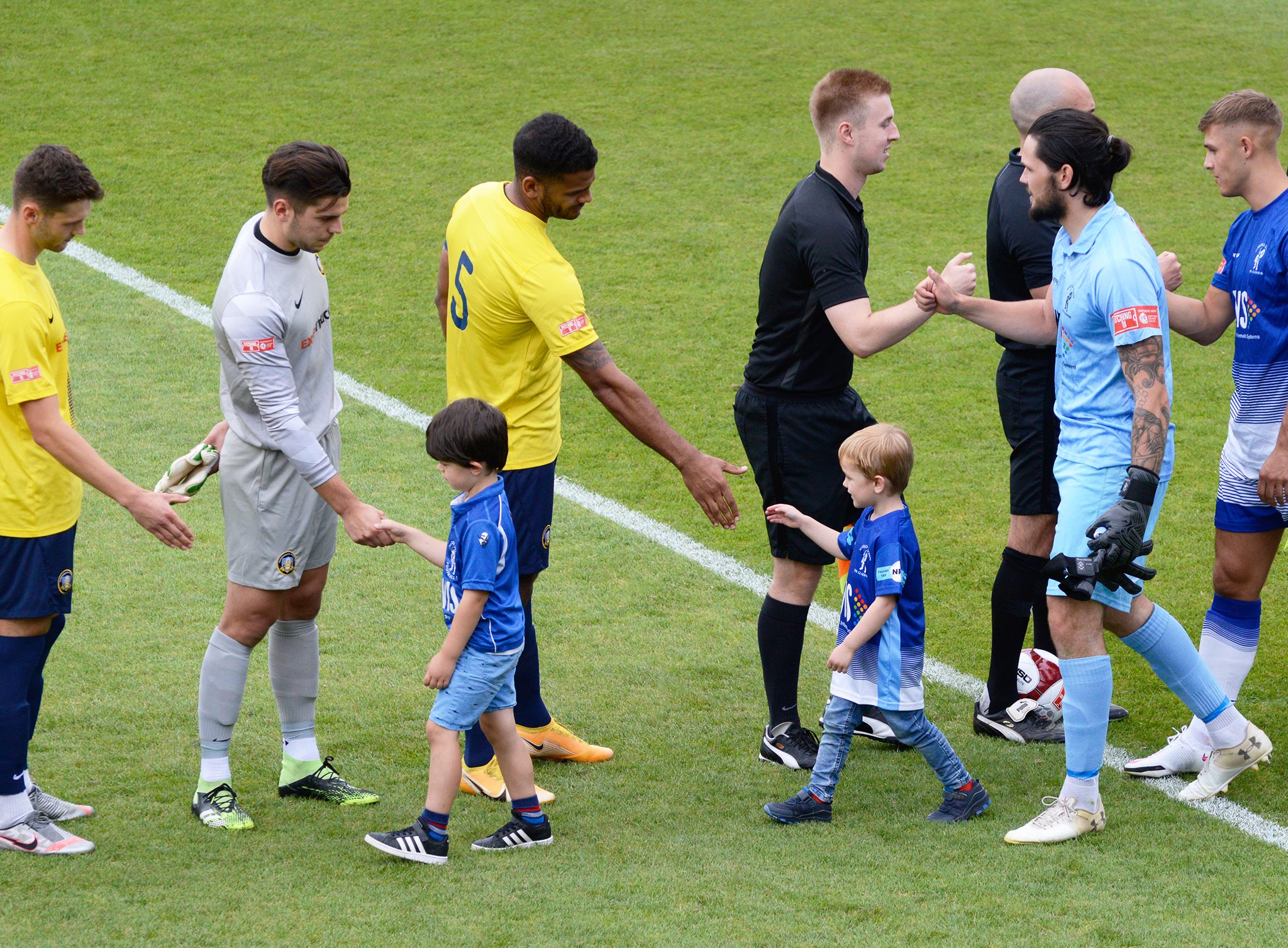 ist, only needing half a yard to whip in the ball to the near post.

Trinity battled away, but with little reward. Neither goalkeeper being forced into evasive action, with the visitors simply punished for the visitors being more ruthless in the box, the on loan Rotherham forward Greaves putting away the two chances that came his way. Half time, Matlock Town 2 Gainsborough Trinity 0.

Hughes, Greaves and Byrne combined down the Gainsborough left, but last ditch defending saw the Holy Blues scramble the ball away as the home side looked for a third, while Joe Wilson and Alex Wollerton tried to combine down the right hand side, looking to exploit pockets in the visiting defence. The game became scrappy, more and more niggly free kicks breaking up the flow of the game. Bishop for Trinity had to be alert to snuff out the danger of devilish Byrne balls into the box.

But on sixty-six, Ryan Qualter was on hand to power home from inside the six yard box, giving Yates no chance and settling the tie as a contest. Rangel on as a substitute showed glimpses of his ability during a short cameo, but he too was unable to find the killer ball to unlock a stubborn, yet rarely tested Gladiators’ defence. Gould hit the target for Trinity, but all of the fizz was taken out of the shot and Rowley was comfortably behind the effort.

At the other end teenage centre back, Hayden Cann stuck manfully to his guns, up against the fierce competitor that is Liam Hughes. Cieron Keane on for the last quarter of an hour, deployed as a right sided forward was busy on the ball, but as time ticked towards ninety, the Holy Blues struggled to muster any real effort on target. Yet there was still time for Byrne to see an effort ruled out for offside as he failed to retreat quickly enough before Kendle’s ball fell to him in the box.

Cann released Gould down the right hand side, and his cut back looked to find the enrushing Keane, but a perfectly timed Qualter challenge saw the ball behind for a corner kick and little more reward. Before finally, in stoppage time, Wollerton played in the overlapping Wilson and his fierce cross-cum-shot was parried behind for another late corner. It wasn’t to be for Trinity, as attention turns to the Emirates FA Cup next weekend, with a trip to the West Midlands to take on Sporting Khalsa.

The Gainsborough faithful will be hoping for a change in fortunes for Tom Shaw’s men and some of the clubs attacking options returning to the squad; but only time will tell. Here’s hoping the cup provides a welcome distraction from the league.