Gainsborough Trinity fell at the first hurdle in this season’s Emirates FA Cup, making it the second exit before the second qualifying round in as many seasons. Beaten 2-1 away at Sporting Khalsa in a game which the Holy Blues dominated for long periods, but were punished for their wastefulness in front of goal. Making four changes from the side beaten on Bank Holiday Monday, Charlie Jemson came in for his first competitive start for Trinity, alongside Hayden Cann and the returning Callum Minkley. Isaac Rice (cup-tied) and Club Captain, Lewis Carr (injured) making way. Cieron Keane was restored to the starting line-up, making it three changes to the Gainsborough back five. Up front, Nyle Blake was back and preferred up front to Jack Gibson, who like Lewis Butroid, dropped to the bench.

Despite the changes, the Holy Blues started the game brightly, and could feel aggrieved when referee Liam Corbett waved away appeals for a Gainsborough penalty inside the opening three minutes for a foul on Blake. Tesfa Robinson appearing to bundle Blake to the ground. Three minutes later and Blake was again denied, streaking through on goal, he attempted to round the Khalsa number one, but was thwarted by the ‘keeper who gathered the ball at his feet after good vision from Toby Gould picked out the Gainsborough number nine.

Charlie Jemson went into the referee’s notebook on eight minutes for a foul on Gibraltar international midfielder Jake Gosling. Undeterred though, the visitors continued to press and on the half hour mark, Toby Gould linked up brilliantly with Nyle Blake to cut through the Sporting defence. Gould got the ball into the feet of Blake, continued his run, but as he primed to pull the trigger, the right back got round on the cover to put Gould off as he shot, the forward’s effort ending up straight at Arnold in the home goal. Blake demonstrated his hold up play again when he linked with Joe Wilson, with the Trinity right wing back tying Robinson in knots, before his effort deflected behind off Okojie for a corner. A searching Gould cross field ball then found Wilson, who on the stretch cut back brilliantly for Blake, only to see the forwa 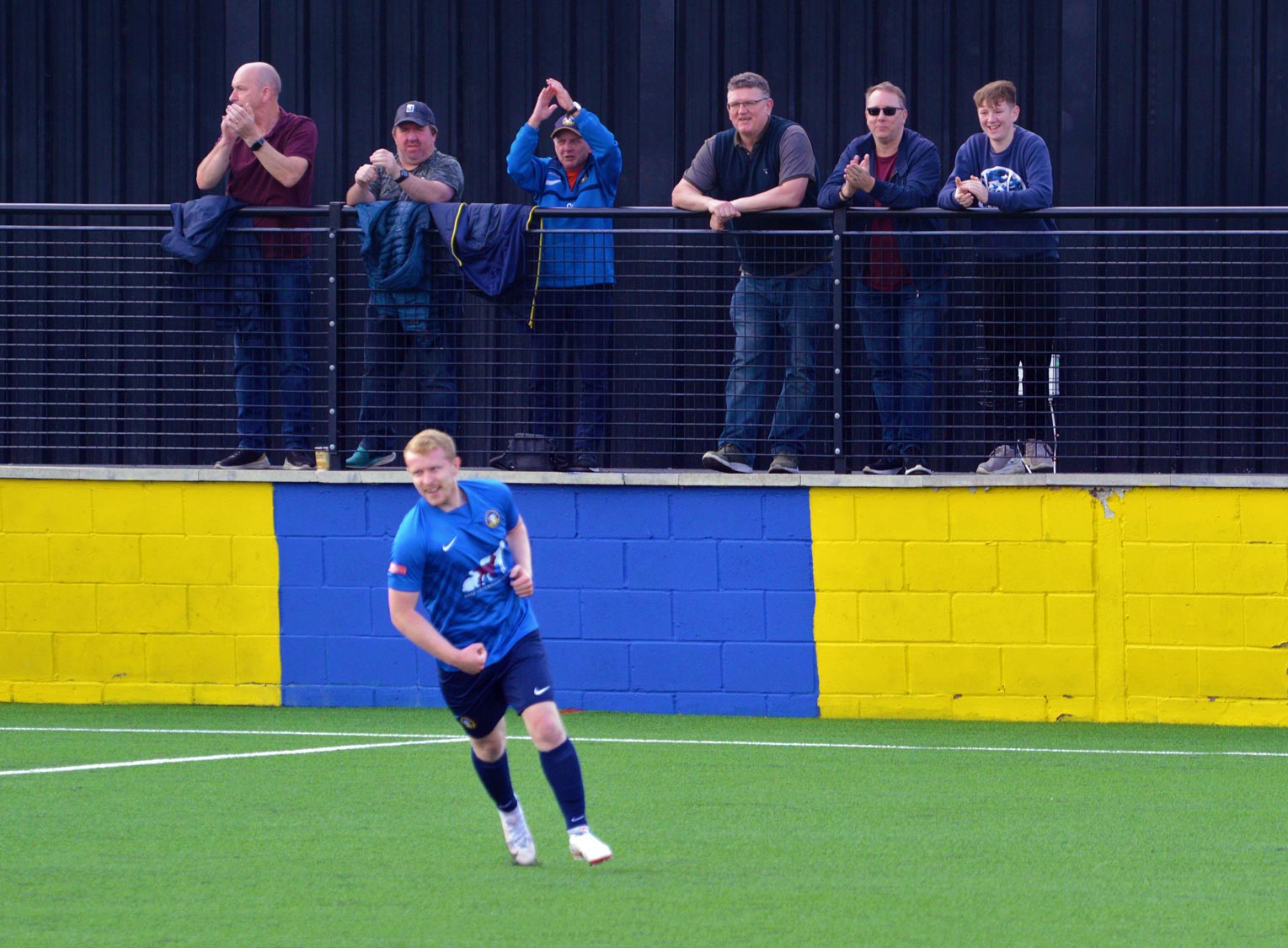 rd denied by the legs of Arnold.

Ten minutes before the break, Matt Yates had to be at his best to deny Gurjit Singh, after Gosling’s clever ball found the number ten on the right edge of the penalty area, his effort from point blank range met by the strong arm of the Trinity ‘keeper. And just on the stroke of half time, Blake did brilliantly to disposes Robinson on the Khalsa left hand side, but as he looked for supporting runners in the box, Gould cut a solitary figure and the former Hyde man couldn’t pick him out.

Despite creating the better opportunities, Trinity went in at the break on level terms and Sporting Khalsa would take great heart from that. Half time, Sporting Khalsa 0, Gainsborough Trinity 0.

The second half started slower for the Holy Blues, but ten minutes into the half, Charlie Jemson was an eye-brows’ width away from meeting a Cieron Keane centre from the right hand side, as he arrived late at the back post.

With Khalsa growing more into the game, as Trinity defended a corner kick, Neal Bishop was adjudged to have hauled the home side’s big number nine to the ground, with the referee having little hesitation in pointing to the spot. Bishop shown a yellow card for his part in the tustle that had gone on for thirty seconds prior. Gosling stepped up to send Yates the wrong way from the spot.

With their noses in front, The Lions played with their tails up, and after Hayden Cann could only partially clear the danger, James McGrady, under pressure from George Hornshaw brought out another fine save from Yates low down to his right to keep Gainsborough in the game. Wilson continued to offer an attacking outlet down the right, but Gould couldn’t profit from the wing backs’ ball back. The retreating defender clearing off the line as Gould’s effort lacked any real purchase.

Substitute Kyle Dixon then released Wilson with a clever chipped ball and with the former Trinity man getting the wrong side of McGrady, the home number seven bundled Wilson to the ground with the referee, having consulted with his assistant on the near side, pointing to the spot. Kyle Dixon calmly stepped up to nestle the ball in the bottom corner to open his Gainsborough Trinity account and celebrate in front of the travelling faithful.

On as a substitute with eleven minutes remaining, Jumaane Meggoe looked to play on the shoulder, and Callum Minkley had to be alert to the danger to sweep round on one occasion. Keane then won the ball back and Hornshaw released Blake down the left hand side, his cut back found Rangel, whose found Dixon. The substitutes combining to invite Wilson forward to shoot, hitting the target low down to the goalkeeper’s bottom right hand corner, Arnold was equal to it, parrying the effort behind for a corner.

All action Wilson then bravely defended a ball into the box, preventing Robinson from a clear header on goal from six yards out, but despite Wilson’s best efforts, the Holy Blues were set to finish on the losing side. Possession was squandered in attack and Gosling provided the assist for the substitute Meggoe to finish as Yates raced out to narrow the angle, triggering scenes of delight in WV13 as Khalsa progressed to the Second Qualifying Round. An 89th minute winner giving no time for a second Trinity fightback.