Gainsborough Trinity moved up to 16th in the early season table with a resilient 2-1 home win over Morpeth Town at the Gainsborough Martin & Co Arena with goals coming through Toby Gould and debutant Bradley Grayson, signed on the day of the match from Grantham Town. Head Coach, Tom Shaw looked for a reaction following his side’s disappointing FA Cup exit on Saturday, making a trio of changes to the side, including handing debuts to Liam Waldock and match winner Grayson. There was also a return for Isaac Rice who had missed out at the weekend as he was cup-tied.

With four centre backs named, Trinity defended the face of their goal resolutely and in the main kept chances to a premium for the visitors. Though saying that, the best chance for the visitors came in the opening six minutes, Trinity goalkeeper, Matt Yates had to be alert to bravely save at the feet of the Morpeth number six and had to be equally alert, back pedalling to turn an ambitious effort from a halfway line free kick over his bar, shortly before half time. Trinity fashioned one real chance, when a quick free kick down the left played in Nyle Blake, he out stripped the visiting defence, but his squared ball wasn’t converted with Hornshaw and Gould attempting to punish the Highwaymen for switching off. Half time, Gainsborough Trinity 0, Morpeth Town 0.

From a position of even-stevens at half time, Gainsborough were determined to build on the half time score and set about their opponents from the outset. Two minutes into the second half George Hornshaw went into the referee’s notebook for a mis-timed challenge on Carl Finnigan that saw the forward needing extended treatment before eventually limping off. On 53 minutes, a huge Matt Yates clearance released Nyle Blake down the left hand side, the forward never looking like giving up the chase, he collected the ball by the left hand corner flag and waited for support. That support arrived in the form of 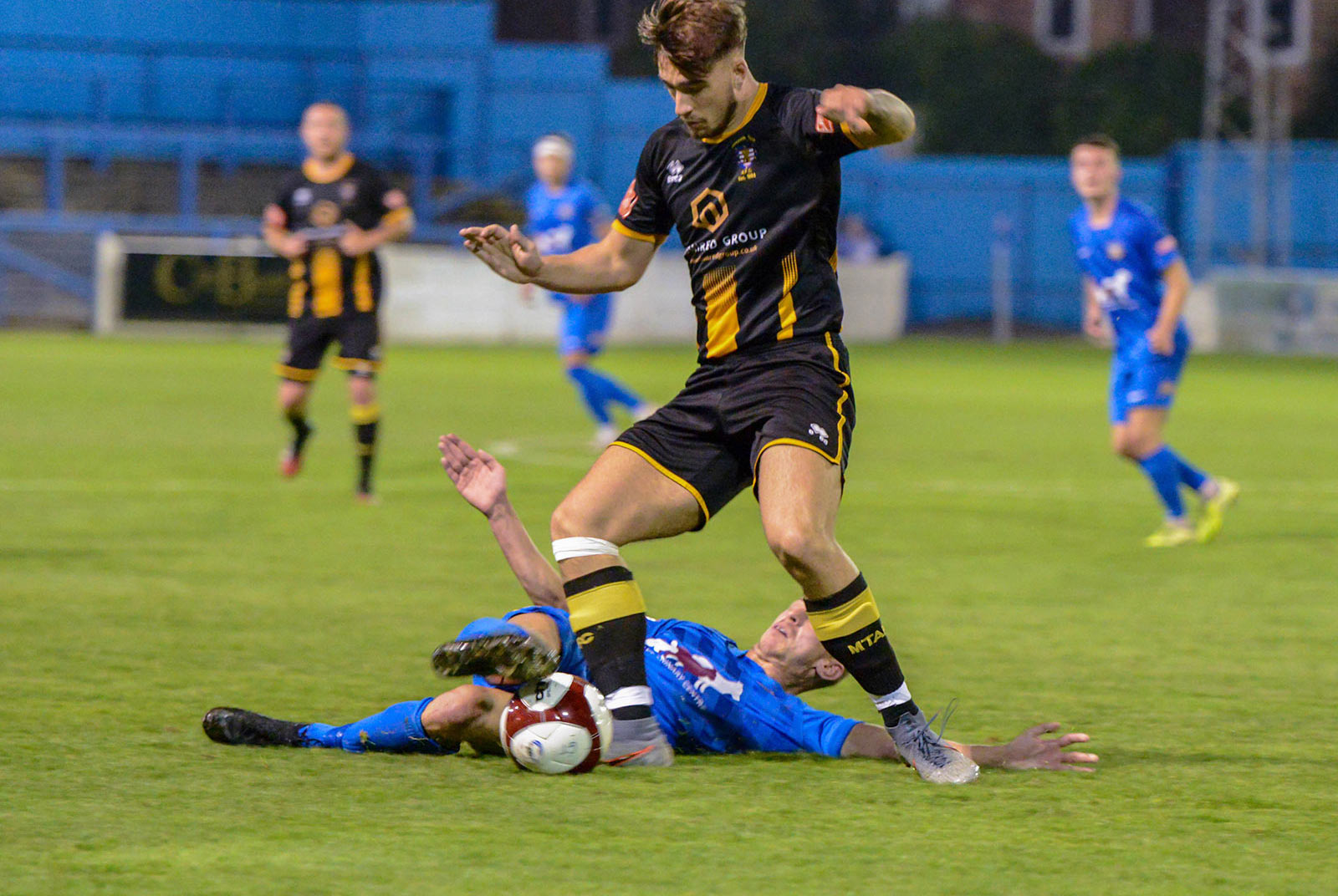 Gainsborough doubled the lead on 65 minutes, with Blake again at the heart of things for the Holy Blues. He chased down a Joe Wilson ball in the right channel, forcing a short back pass from Ben Ramsey, the left wingback for the Highwaymen, before charging down Lowson’s clearance. The ball falling kindly for Brad Grayson to slide the ball home into the unguarded goal, in what was to be the new recruits final action of the evening before being replaced by Alex Wollerton. The perfect reward for an industrious evenings work, having only met his team mates an hour before kick-off.

Morpeth looked for a reaction, but Trinity marshalled the threat of the visitors well for long periods of the game. Charlie Jemson a rock at the heart of the defence for the Holy Blues. A momentary lapse in collective concentration gave Jack Foalle the freedom of the penalty area: bringing the ball down and firing past Yates to reduce the deficit, but Trinity showed great nerve to navigate more than seven additional minutes of added time to secure a second home victory in succession and set themselves up nicely for two tough away games, against Warrington Town and Basford United in the next seven days.