Gainsborough Trinity, despite again showing significant improvements, fell to defeat away at Basford United, with a goal in each half from Matt Thornhill and Kane Richards securing the points for the home side. Bad luck and misfortune robbed Head Coach Tom Shaw of three players at 4pm this afternoon as the boss was forced into making three changes to his starting personnel, not to mention a positional change for the enigmatic Toby Gould. Gould was shifted to wing back to counteract the loss of Cieron Keane who failed a late fitness test. Callum Minkley missed out, due to personal reasons and Neal Bishop fell ill late afternoon, handing opportunities to Alex Wollerton, Hayden Cann and Sheffield Wednesday loanee Liam Waldock.

Despite the late changes to the plan, Trinity took the fight to Basford and for long periods more than matched one of the favourites for the league. George Hornshaw had the first sighter of the game, after industrious work by Joe Wilson on the right, Hornshaw fashioned a shooting opportunity that he dragged wide of Adam Collin’s right hand upright. Trinity’s trio in the midfield engine room competed brilliantly, providing a platform for the Holy Blues to build on. Competing well against the home sides midfield quartet. And with the twin threat of Blake and Grayson, Gainsborough certainly looked to have enough within the squad to hurt the opposition.

On eighteen minutes an innocuous collision between Matt Yates and Kane Richards, the Basford forward, left the Trinity ‘keeper stricken and needing medical attention on the field of play for thirty minutes before being stretchered off to an awaiting ambulance. With no substitute ‘keeper on the bench, it was to be teenage striker, Jack Gibson to don the gloves in Yates’ absence.

And after a further ten minutes, for the players to warm up for a second time, the game could get back under way. Seven minutes back into the game following the extended delay and Trinity were forced into a second early change, Nyle Blake being replaced by Harry Jessop before the half hour mark as things went from bad to worse 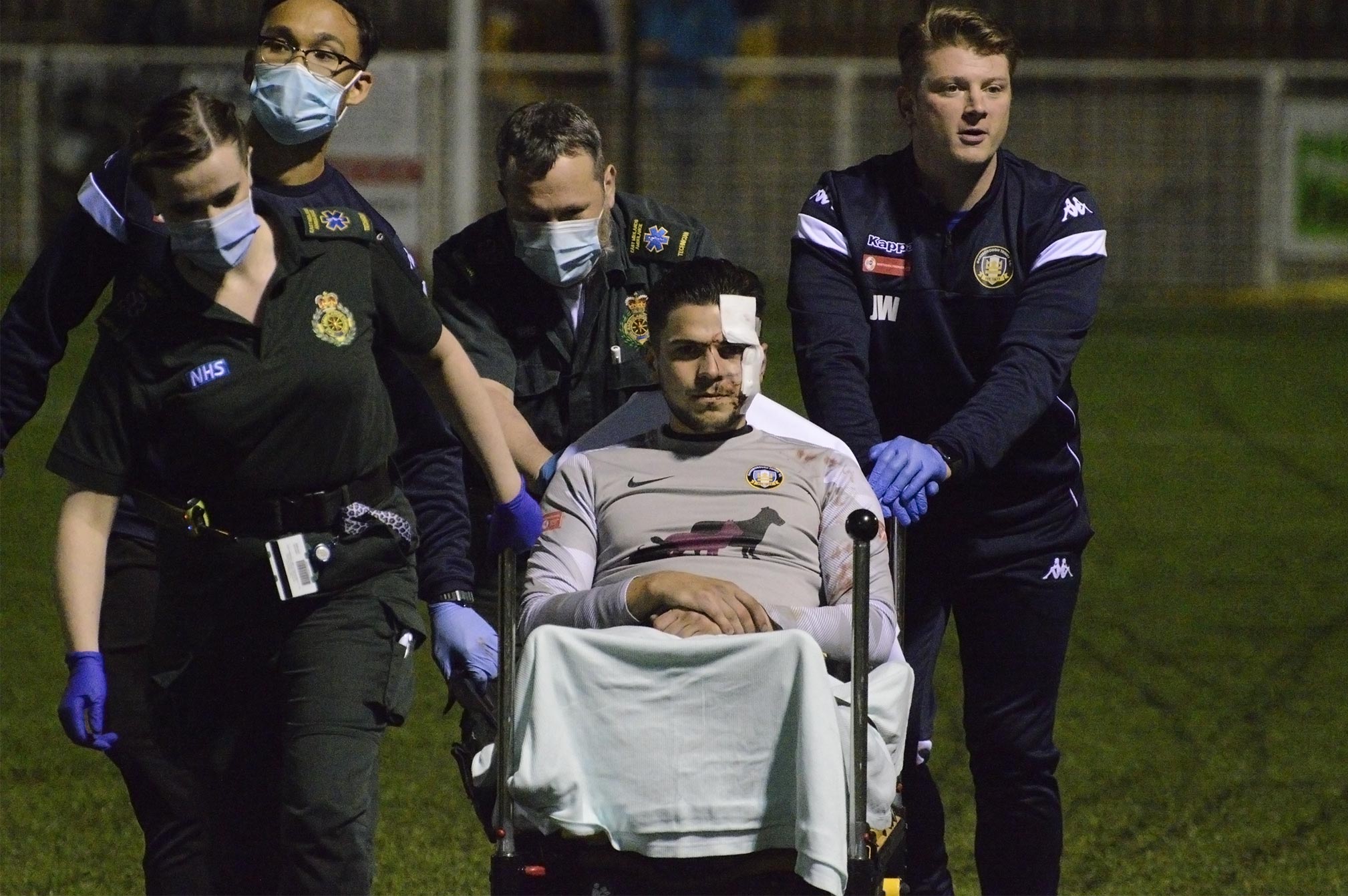 for the Holy Blues. Blake having been a handful for the Basford rear guard in the opening exchanges. Penalty appeals for both sides were faced with an equally stone-faced reply by the referee as O’Connor and Wollerton both went down in the box at opposite ends of the field.

Trinity looked to press the ball quickly led by the infectious Waldock in the middle of the park. He won the ball back and found Jessop, who looked to dance inside from the left of the area, but as half a yard opened up for a shot, Declan Dunn got across well on the cover and forced the on loan Iron striker to foul, as he tried to pull the trigger.

Matt Thornhill worked himself a free header inside the box from an in-swinging corner, leaving Jack Gibson between the sticks with little chance, despite getting his finger tips to the ball. An undeserved blow for the Holy Blues in a half they had more than competed in.

Wollerton was pulling the strings in the middle of the park and he threaded a fine ball out to Gould on the left and he delivered a teasing first time centre into the box that Collin had to deal with, tipping the ball over his bar as he hurriedly back-pedalled, only to see the Assistant on the far side flag to say the ball had already gone behind.

Grayson then let fly from range, but saw his effort deflected behind for a corner before Gould, who was good value raiding forward from left wing back, had the opportunity to cut in from the left, fashioning a shooting opportunity on his right, but he couldn’t get enough bend on the ball to bring it back round towards the top corner. So the visiting Blues went in at the break a goal down, but could feel more than satisfied with their first half performance, despite losing two players inside the opening half an hour. Half time, Basford United 1, Gainsborough Trinity 0.

The second half started and the Holy Blues came out fighting, but the story of our season really as the ball wouldn’t fall kindly for Trinity, in either box. Kane Richards popping up in the right place to fire home under pressure from stand in ‘keeper Jack Gibson, while the ball bouncing around the Basford box was repeatedly repelled, as both sides continued to put their bodies on the line to make for an engaging encounter.

Immediately after falling two behind, Hayden Cann’s raking ball forward caught Owen Betts out at right full back, Hornshaw caught his drive well, but it was straight into mid-drift of Collin in the Basford goal. Charlie Jemson did well to recover, bravely blocking an Aaron O’Connor drive as the experienced striker looked to pounce on a mis-placed ball out of defence by the Holy Blues, protecting Gibson the deputy between the sticks.

When Wilson and Wollerton linked down the right, the latter got to the by-line only to see his cutback squeezed out for a throw in with players up in support for Trinity. A rare, misplaced pass from Declan Dunn across the face of his own eighteen yard box looked to gift Grayson a chance on goal. The forward who had ran himself into the ground up top for Trinity though, just didn’t have the legs to test Collin as substitute James Clifton recovered well to snuff out the danger.

And with it, any final hope of Trinity grabbing a consolation. With our thoughts with ‘keeper Matt Yates and wishing him a speedy recovery, the remaining attention turns to the next game. The game against Stalybridge Celtic rearranged for Saturday, the first of three home games on the spin. With home advantage, let’s turn the Gainsborough Martin & Co Arena into a fortress. Let’s get the Northolme rocking and give this side our every backing! We are all in this together!