Gainsborough dropped two points as ten man Radcliffe snatched a point courtesy of a sublime 25 yard free-kick by Bobby Grant on 89 minutes, preventing the home side from making it a four straight home wins on the spin. Despite dominating for long periods, the Holy Blues could only once find their way past the inspired visiting skipper and goalkeeper, Cameron Belford. Unchanged from the starting line up victorious last time out, at home to Stalybridge Celtic, Head Coach Tom Shaw was able to strengthen his squad with the addition of Oliver Greaves from Matlock Town, whilst welcoming back into the fold, Isaac Rice and Nyle Blake. Youngsters, Brad Ronis and Josh Fraiwald missing out as the Holy Blues see a clutch of players returning to contention.

It was a game Gainsborough dominated throughout, but a combination of superb goalkeeping from man of the match, Cameron Belford, the cross bar and some off-colour finishing, the Holy Blues were made to pay for not adding to local lad Lewis Butroid’s first goal for the club. On a quarter of an hour, Neal Bishop’s glancing header from Joe Wilson’s corner, was cleared off the line before Jean Louis Akpro-Akpra forced a save from Harvey Cartwright. Grant’s floated ball to the back post finding the veteran forward at the back post, but as he tried to steer his effort goalwards, Cartwright was equal to the danger.

Callum Minkley was called into action, making a well time challenge as Grant again looked lively, but after that though, it was one way traffic. Belford turned Butroid’s free kick away for a corner. A save for the cameras as he flung himself to his left to tip away the full back’s goalbound effort.

Playing with gusto, Alex Wollerton was then denied by the impressive Belford. Harry Jessop neatly flicked the ball round the corner, for Wollerton breaking the lines from midfield, but his shot was turned behind for another Gainsborough corner.

Bishop, a colossus in both boxes then saw his header deflect onto the crossbar. Wilson & Wollerton then combined with the latter forcing a smart save down to the ‘keepers left, before Wilso 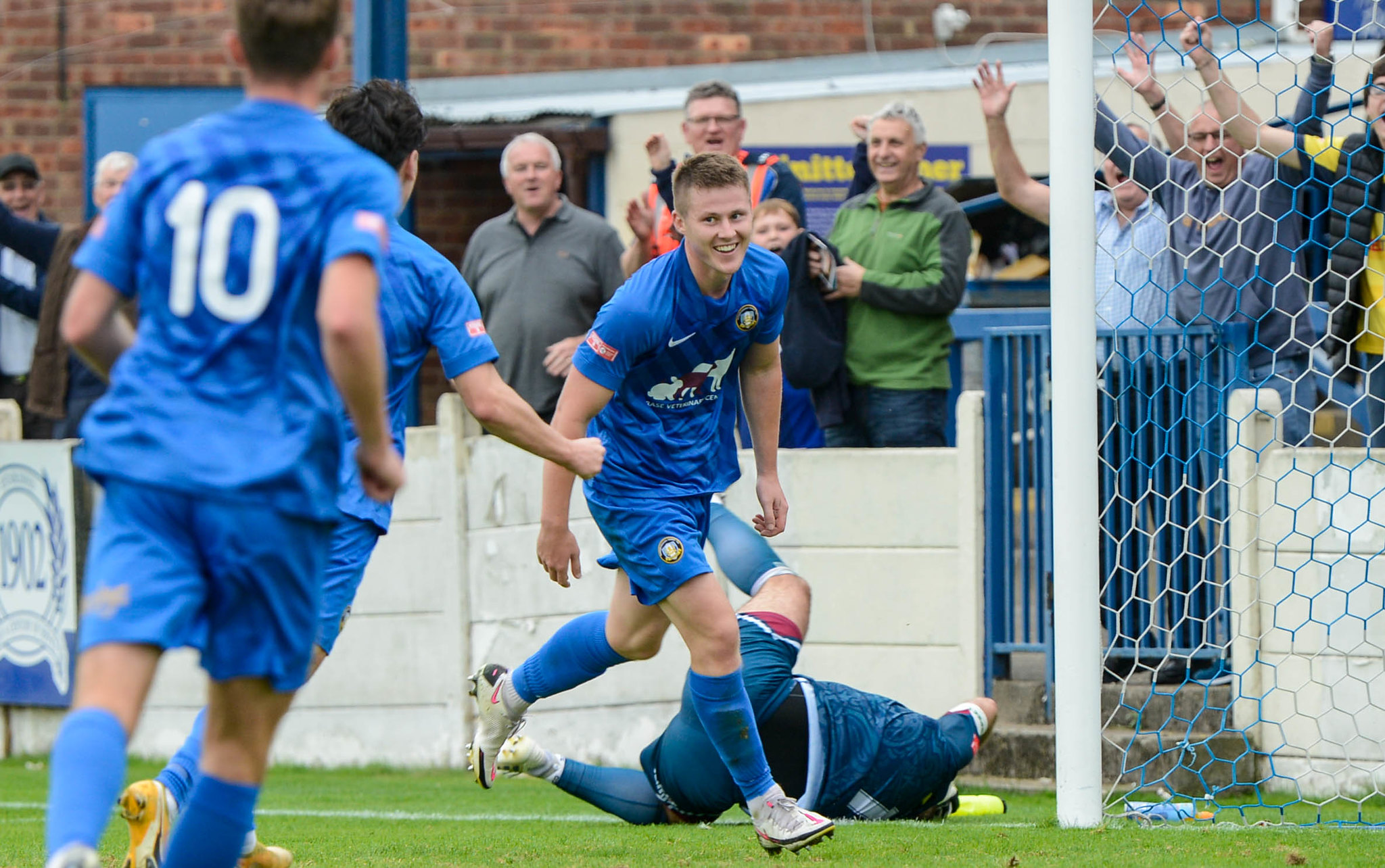 n surged from deep, his clever reverse ball found Brad Grayson, only to see the centre forward slide his effort agonisingly the wrong side of the post.

Back on defensive duties, Jessop cleared from inside his penalty area. With Grayson up top work fervently, he gave no respite for the visiting defence and three minutes before half time, the visitors were reduced to ten men, when Taylor Jones pulled back Grayson, as he looked to spin in behind and race away. Referee Benjamin Tomlinson had no qualms, showing the full back a straight red card and handing Trinity the numerical advantage.

Unlike against Stalybridge, the Holy Blues couldn’t find the breakthrough in the first half, going in at the break, despite dominating for long spells, with the score line level. There was enough time at the end of the half, for Rod Orlando-Young to be introduced to the fray, the former Trinity favourite slotting in, in the unfamiliar role of left back.

Trinity started the second half looking to use the one man advantage, but through bodies on the line, luck and the final rub of the green, Trinity couldn’t break the deadlock. A fine Wilson run and one-two with the impressive Grayson, saw him through on goal, but Belford again made an unbelievable save to deny the flying full back, Radcliffe dealing with the resulting corner.

It wouldn’t be much longer before Trinity got the goal their play deserved though. Wilson and Wollerton combined with Grayson down the right, the forward dinked a cross to the back post, where Butroid was able to head home to the delight of the Gainsborough faithful.

Grayson’s pressure and perseverance almost paid off when he beat Cummings to the ball and got to the by-line. His cut back found Jessop, but the on loan Scunthorpe man took a touch, when a first time finish was perhaps more favourable. With Liam Waldock fouled on the edge of the box in the aftermath, Butroid took aim, only to see his free-kick ricochet off the wall and canon up and over the bar.

Trinity looked to run down the clock, playing some controlled football, but as the side took their foot off the gas, invited on the pressure from the vastly more experienced Radcliffe, who though rarely threatened Cartwright’s goal directly, bombarded the box with long throws, courtesy of Tom Miller’s propulsions.

Moments after coming on as substitute Nyle Blake had the chance to double Trinity’s lead. Joe Wilson’s ball down the right hand channel had Oliver Thornley in all kinds of trouble as he mis-judged the spin of the ball, but so too did Blake as he blazed wide, with only the ‘keeper to beat.

And Trinity were made to pay when Andy Owens won a free kick, twenty-five yards from goal, and Grant stepped up to curl home the equaliser. Late heartache for the Holy Blues, who’s effort and endeavour again deserved so much more, but left to rue two dropped points on another positive afternoon, where progress for all, was clear to see.

There is little time for Shaw’s men to lick their wounds though, as the Holy Blues are back in action again on Tuesday evening, when Buxton are the visitors. 7.45pm kick off.