Committed and workmanlike, Gainsborough Trinity's young group became men as a spirited performance saw the Holy Blues stand strong, standing together and against the odds, in a torrential downpour that started an hour before kick off, only coming to an end late after the referee's final whistle against much fancied opposition the Blues secured a point. Head Coach Tom Shaw made two changes to the side that had picked up four points in the previous two outings. There were recalls for Toby Gould at left wing back and Nyle Blake replaced Harry Jessop up top as Cieron Keane and Lewis Butroid took places on the bench.

Trinity worked together tirelessly to restrict openings for the opposition with Jamie Ward the only player in the second half to work Harvey Cartwright between the sticks. The on loan goalkeeper recording his second clean sheet in three games. The defence, brilliantly marshalled by veteran Neal Bishop quelled the threat of Chambers and laterly seven goal hot shot Diego DeGirolamo. Charlie Jemson put in a man of the match performance on the right of the defence, while skipper Callum Minkley continues to grow as Shaw declared, his young boys became men this evening.

Minkley met a Joe Wilson corner, and prodded goalwards, but his effort lacked any real purchase and Theo Richardson saved, before the visitors scrambled the danger behind for another corner, that the Holy Blues couldn’t work to their advantage. Lindon Meikle was lucky to avoid a booking as he fouled the tireless Bradley Grayson, with the forward coming short and looking to link the play. Grayson lashing over the bar after Gould’s free kick was only partially cleared.

Alex Wollerton was full of energy in the middle of the park and regularly looked to get Trinity on the front foot. With and without the ball, the youngster was fully committed and unlucky to pick up a booking in the first half. He didn’t let the caution affect his game though, combining well with Hornshaw and Waldock to pro 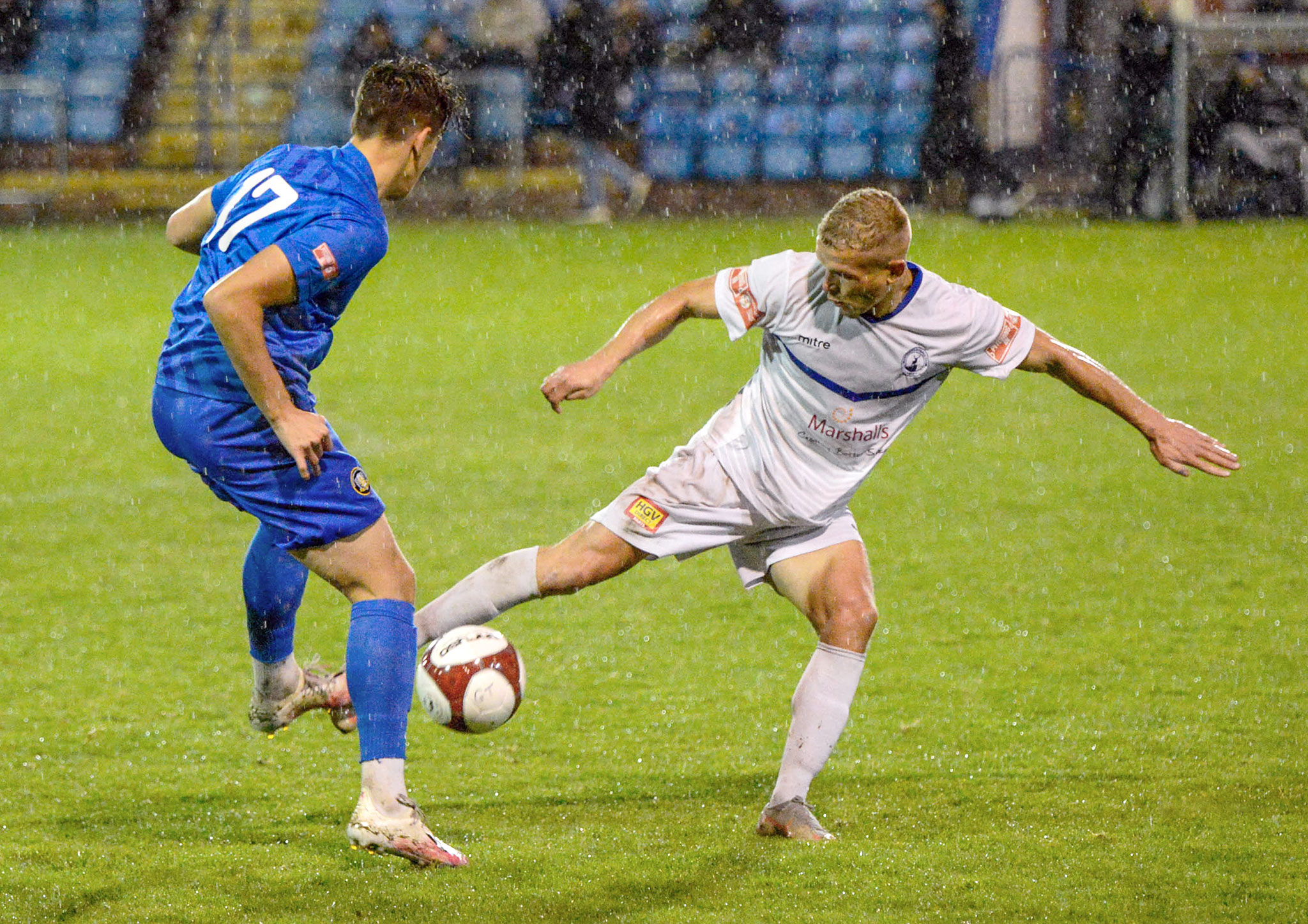 vide the platform for a solid Gainsborough display. Jamie Ward was wasteful from a well-positioned free-kick and the ball rebounding back off the Stuart Horsley sponsored stand, Cartwright was able to restart the game quickly, picking out Nyle Blake who looked to get at the Buxton defence. Narrowly edged out by the Bucks’ skipper Josh Granite, Blake just couldn’t find his way round the centre back.

James Hurst thought he had given the visitors an undeserved lead approaching half time, when he headed home at the back post following a well worked corner routine. But his joy quickly turned to despair as his effort was ruled out, thanks to the eagle eye of the Assistant Referee on the Ping Stand side. Half time, Gainsborough Trinity 0, Buxton 0.

In the second half, Ward shot straight at Cartwright, and from the clearance, Grayson got in behind and his centre across the face of goal agonisingly had too much on it for Wollerton steaming in from deep before Buxton were reduced to wild pot shots in an attempt to get their noses in front. Patient build up and an organised rear guard action from Tom Shaw’s men. Strengthened at half time with the introduction of Isaac Rice, slotting in on the left of the defence, prevented the visitors troubling the Holy Blues goal.

Appeals for a Buxton penalty midway through the second half went unanswered by the man in the middle. Unmoved as he looked on from the edge of the box. Oliver Greaves was thrown into the fray and slotted into the middle of the park well, showing some nice touches and looking to link the play, whilst also showing good strength to hold the ball up and get Trinity up the pitch. Wilson’s floated cross meant Jemson had to generate all of his own power. Of which he couldn’t generate enough. His header not troubling Richardson from twelve yards out as a rare venture forward reminded the visitors that the Holy Blues were not just content to sit and soak up the pressure.

But the game, despite finishing with no goals, was another step in the right direction for Tom Shaw’s men. Ready to take on Lancaster City and Nantwich Town in an away day double header (Saturday/Tuesday). The side approach these games high in confidence and ready to pick up those elusive first points on the road this campaign!