Gainsborough Trinity continued their improved form away at Lancaster City securing a first three points on the road this season with a steely, determined two goal victory. Second half strikes from Bradley Grayson & Harry Jessop enough to take all three points back to Lincolnshire. Head Coach Tom Shaw made two changes to the starting eleven that drew in midweek with high flying Buxton. Local lad Lewis Butroid was restored to the starting line up, while there was a first start in the midfield for recent addition Oliver Greaves.

Toby Gould and George Hornshaw both missing completely from the travelling party, due to injury. There was a welcome boost to the squad though, with the return of Club Captain Lewis Carr amongst the substitutes. The hosts, with a number of recognisable Northern Premier League players amongst their ranks adapted quicker to the blustery, rainy conditions and asked questions of the Gainsborough backline. Dolly Blues' skipper Andy Teague looking to get on the end of a number of set pieces tossed into the Trinity box, but the travelling troops, marshalled by veteran Neal Bishop stood firm.

Captain Callum Minkley landed awkwardly following an early clearance and required treatment, but soldiered on for half an hour before he needed more attention as half time approached. With Physio Jonathan Whitehorne on administering attention to the Gainsborough six, Whitehorne's counterpart was patching the Assistant Referee up, to see him through until half time. That luxury was not afforded to Minkley though, with Lewis Carr primed for action, entering the fray before the half time whistle.

The only change at the break saw the introduction of Lancaster City's 71 year old Club Chaplain, Anthony Keefe, who volunteered to run the line as the match official wasn't fit to continue. 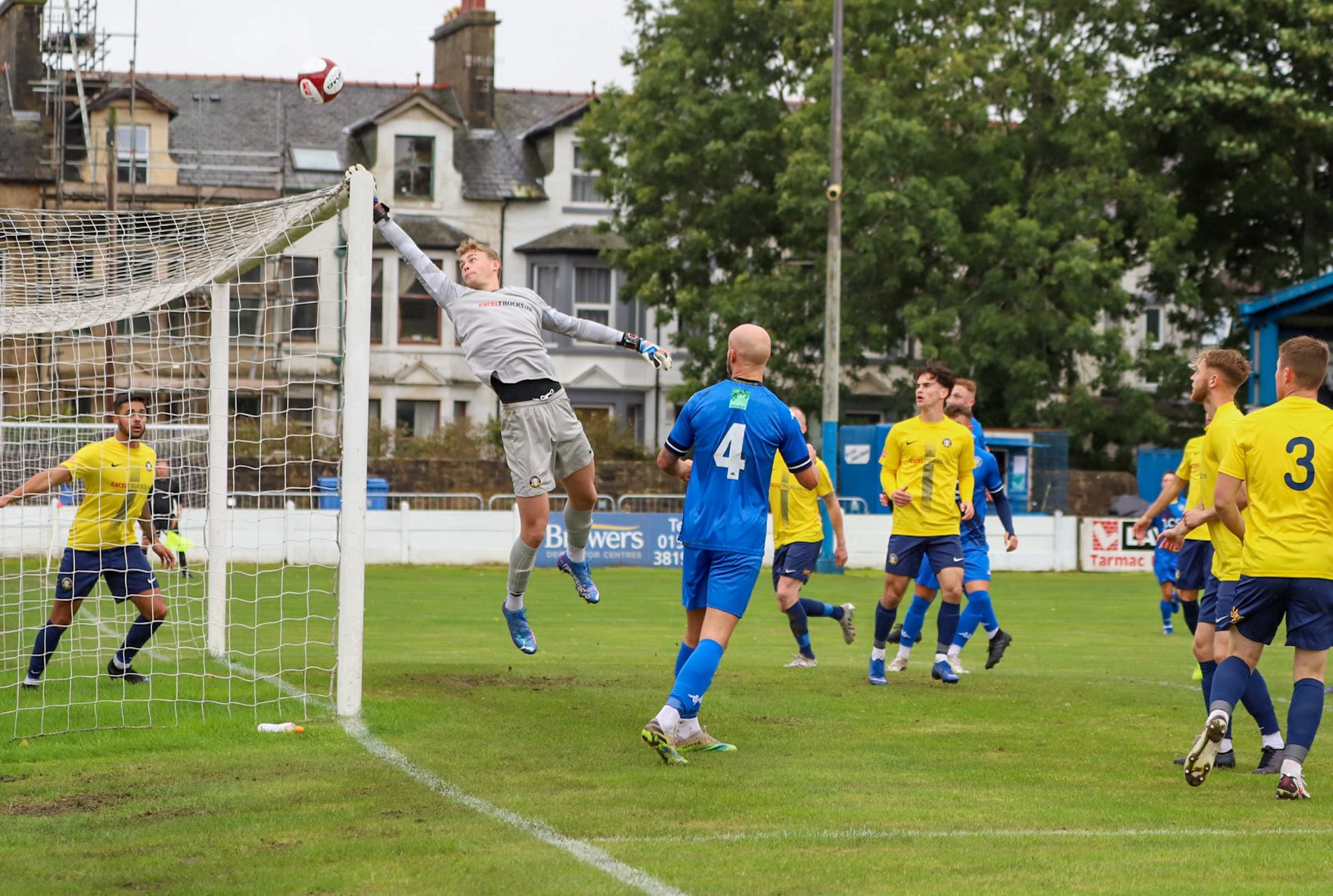 ed the second half on the front foot, but the visiting Trinity dug deep. Dawson tested Cartwright with a free kick, but his handling was assured as he clung on with Kilfin sniffing around on the follow up.

Dawson again tested the Gainsborough goal, this time with Holland ready to pounce. Young Cartwright snuffing out the threat.

Trinity stood firm though and looked a threat on their rare ventures forward. A sweeping counterattack, started with Liam Waldock winning the ball back, he combined with Alex Wollerton who drove forward, carrying the ball out from the back. He slid a beautifully weighted ball back through for Waldock who had continued his run, but the young Owl lacked the killer touch as he dragged his effort wide, when well placed.

As the pressure mounted, on loan 'keeper, Cartwright had to be alert to deal with a number of in-swinging corners and dealt with them commandingly.

Shortly after Waldock’s chance, Trinity would have the breakthrough. A near carbon copy breakaway from our own defensive third saw Wollerton release Grayson. And as Matt Alexander came out to narrow the angle, Grayson scored his third for Trinity, dinking a neat finish over the 'keeper to give Gainsborough the advantage.

Lancaster continued to press. Dawson continued to buzz about looking for openings, but Jemson, Carr & Bishop stood firm, with Waldock in front adding steel to the Blues' play.

And Jessop, on as a substitute midway through the second half, added a second for Trinity three minutes from time. Racing onto Wollerton’s ball down the left hand side, he had it all to do. Samuel Bailey committed to the challenge early and Jessop brought the ball inside the full back, before bearing down on goal and finishing smartly past the flailing Alexander, to the delight of the Trinity faithful gathered behind the goal on the open terrace.

Cartwright would be called into action again before full time, when he was down smartly to his left to beat away a fierce Dawson effort from the right hand edge of his penalty area away, to ensure a third shut out in four games since arriving at the Northolme.

The Holy Blues climbed to 12th in the PitchingIn Northern Premier League table, and now immediately turn attentions to the midweek trip to Cheshire as we look to extend our positive form against Nantwich Town on Tuesday evening. Once again, join us on the journey as we look to back up today's win with another positive experience on the road.

Photo credit with thanks to Jonathan Moore @altymoore1