An eventful afternoon ended all square at the Northolme as Gainsborough Trinity extended their unbeaten run to five as a late Adam Senior header cancelled out a first half own goal scored by Michael Raynes. The point taking Trinity’s tally to sixteen for the season, while the visitors moved off the bottom with the point earned. The Robins position at the bottom of the PitchingIn Northern Premier League a false position, for a side who will no doubt be harbouring hopes of a much higher finish.

Head Coach Tom Shaw made three changes to the side that won away at Lancaster City last weekend, as Lewis Carr returned to the starting line up, replacing the injured Callum Minkley at the heart of the defence. Isaac Rice came in for Oliver Greaves in the midfield engine room, while there was a start for Harry Jessop after his goal last time out. Jessop replacing Blake who dropped out of the sixteen altogether. There was a spot on the bench for new loan forward Rio Moleynuaex as Shaw looked to go all out for the win.

And Trinity came flying out of the traps, with Brad Grayson having a couple of early sighters inside the opening couple of minutes. Charlie Jemson and Jessop helped on a Rice long throw, Grayson’s snap shot charged down by the visiting centre back Harry Coates. Moments later, Waldock’s clipped cross was neatly nodded down by Jessop, finding Grayson, but he couldn’t get his shot away quickly enough and as he tried to make room Harry Spratt did well to block the shot.

Liam Tomsett then tested Harvey Cartwright in the Gainsborough goal. Clever play down the Trinity left Jordan Hulme get to the by-line after good link up play with Senior, Tomsett’s improvised finish was well saved by the legs of the on loan Hull ‘keeper. Harcastle’s driven corner kick found Coates. The centre back was left with his head in his hands though as he coul 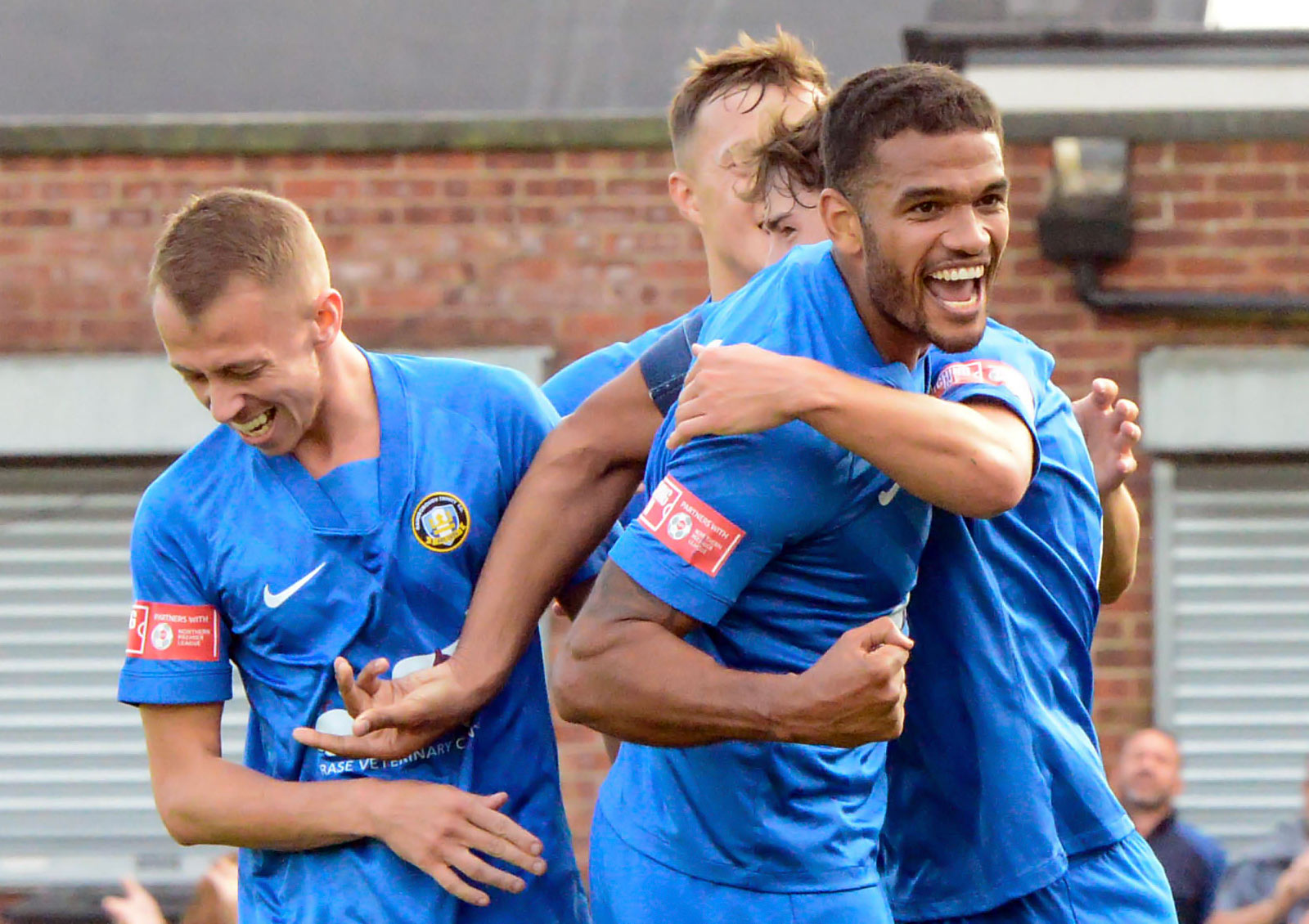 dn’t direct the ball on target from six yards out. Lewis Carr then had to be alert to cut out a low cut back into the area, putting the ball out of the ground for a corner kick, as Ashton looked to take advantage of the stricken Waldock, down injured six yards out.

A Casian-Anghel free-kick was swung into the danger zone, but was confidently dealt with by Cartwright who released Grayson quickly. An intuitive finish didn’t come off for the hardworking number nine, as he didn’t get the contact he was looking for to lift the ball over Martin in the Ashton goal.

Showing some neat flashes, Jessop was looking to come short and spin in behind as the game became littered with niggly fouls. Fouled twice in quick succession, Referee Kevin Saunby gave a final warning to Coates, before Joe Wilson took full advantage of the set piece opportunity, brilliantly picking out skipper Lewis Carr, who’s header back across the face of goal was spectacularly headed home at full length by the Ashton United centre back Michael Raynes to give Trinity the lead.

The goal brought Ashton out of their shells, and it needed a Neal Bishop glancing header to take the ball away from danger as the Robins looked to raid again down the Trinity left. Alex Wollerton then found Isaac Rice, as the Holy Blues retorted, Rice forcing a good save out of Oliver Martin. His 25 yard effort, taking a knick and fizzing towards the ‘keepers right. Martin reacted reacted well to keep the Trinity advantage to one.

Senior did well to deliver a deep cross into the box, but Tom Warren could only steer his meek header straight at Cartwright, before in first half injury time Ashton appealed for a penalty as Tomsett went to ground, with Butroid the closest Trinity player in attendance. The referee deemed there not to be a justified reason for pointing to the spot. Much to the displeasure of the visiting players and staff. With Robins’ boss Michael Clegg shown a half time yellow card as he vented his frustrations towards the Match Officials at the break. Half time: Gainsborough Trinity 1 Ashton United 0.

Ashton started the second period determined to force their way back into the game and a series of corners delivered into a packed six yard box was a regular sight as Trinity’s blue shirted warriors tried gamely to repel the Robins’ every throw of the dice. Neal Bishop was again a focal point in both boxes. In an attacking sense, he saw a header tipped over the bar as Gainsborough threatened to extend their lead, from Butroid’s centre. Before the veteran was in the right place at the right time to clear off the line as the Holy Blues defended a visiting corner. Again, Coates rising highest to threaten the Gainsborough goal.

Hulme’s influence began to grow as he started to affect the game more. And twenty minutes from time, he cut inside and forced a good stop from Cartwright in the Trinity goal. A neat Ben Hardcastle give and go finished with a shot from 30 yards that was comfortably gathered. Harry Jessop’s chasing down, and perseverance gave Grayson half a chance. The ball spinning off Jessop after he’d chased down a lost cause, inadvertently found his strike partner, but as he tried to bend the ball into the bottom corner, a last-ditch block sent the ball wide of the target.

Wollerton’s raking cross field pass looked to set Grayson away down the left, but he only had Molyneaux up in support – and he couldn’t pick him out with the centre. Oliver Martin plucking the ball out of the air, Trinity’s last real opportunity of the game. And Casian Anghel’s set pieces eventually paid dividends three minutes from time, when his late corner was powered home from close range by Senior. Escaping his man and heading home from inside the six yard box. Coates then went close again for the visitors, when he stooped to head goal-wards. Cartwright equal to that one to save up high to his right.

Deep into added time, George Hornshaw was shown a straight red card for a strong challenge after he over ran the ball. Much in keeping with the rest of the game where Mr Saunby had let a lot slide, the reaction of the Ashton bench, up in unison doing little to fight young Hornshaw’s corner and plenty to see the man in black reach for his top pocket and brandish the red. The late goal perhaps making it feel like two points dropped, but a below par performance from the Blues still saw a point added to the chart and another unbeaten at home. With plenty of scope for improvement, there’s plenty of cause for optimism.

And seven days, before Trinity are back in action, this time on the road, as we make the trip to Staffordshire. Stafford Rangers the opposition, at Marston Road.