Stafford Rangers and Gainsborough Trinity played out a goal-less draw at Marston Road as the Holy Blues stretched their unbeaten run to six games without defeat, their fourth clean sheet in half a dozen games and a steely desire not to be beaten, that sets the side up for the second third of the season, with the injury list finally, say it quietly, beginning to lessen. Tom Shaw made just the one change to the Trinity side held at home last weekend, Rio Molyenaeux making his first start, as Harry Jessop dropped to the bench for this one.

There was a return to the matchday squad for Callum Minkley & Toby Gould, two of those recently missing through injury, as George Hornshaw missed his first of three games, due to his Ashton dismissal.

Stafford posed a tough test for Trinity, with the Staffordshire ground an unhappy hunting ground for the Holy Blues, who have failed to taste victory in 43 years at Marston Road. The Holy Blues did start on the front foot. And following a Lewis Butroid corner, the hosts failed to clear the cleverly worked set piece, but brave defending by the home side saw bodies on the line to deny Grayson, Jemson & Bishop, before Butroid himself lashed an effort, whistling wide of the goal.

Harvey Cartwright had to be alert, making a smart save away to his right after Joe Kenton forced the on loan Hull City shot stopper into action. Home skipper, Thomas Tonks was frequently in action on the flanks, hurling in missile after missile. But Trinity's defensive unit of skipper Carr, Charlie Jemson & the ever young Bishop repelled every threat thrown at the Holy Blues.

Alex Fletcher flashed a rising drive narrowly over the angle of post and bar, as Grayson & Molyenaeux were starved of opportunities on the counter. Jake Charles flicked on exquisitely for Luca Navarro, the breaking midfielder tried to open up his body, but couldn't curl the ball into the far 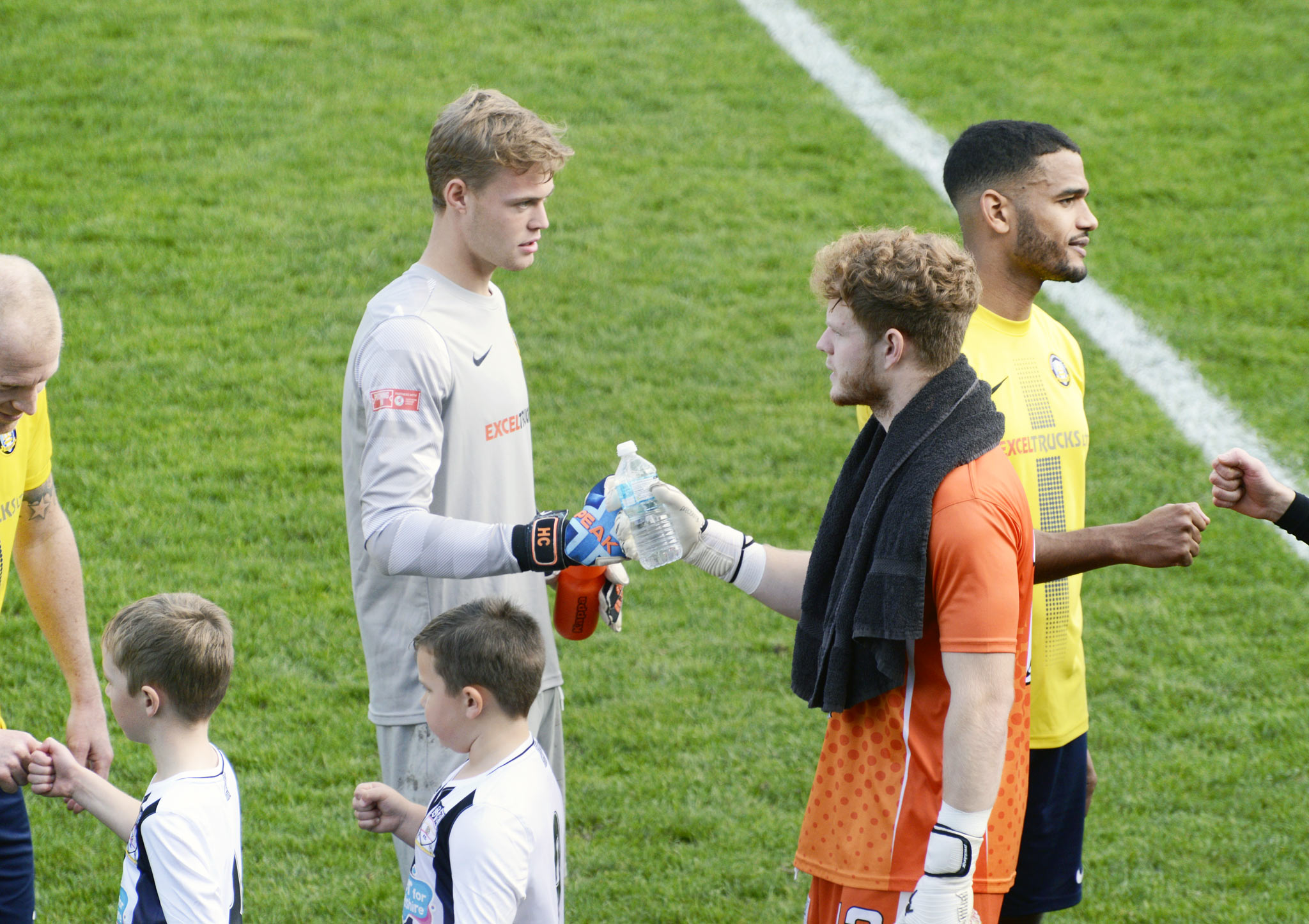 corner, a let off for the visitors, but a let off their endeavours deserved.

Trinity dug in as the aerial examination continued and were able to go in at the interval on level terms.

Strong words were exchanged at half time as the Holy Blues were determined to give more of an account of themselves in an attacking sense. And less than two minutes into the second period, Ben Woods found himself in the referee's notebook as he wrestled Molyeneuax to the ground as Trinity looked to counter.

Shaw shuffled his pack just shy of the hour mark, replacing Molyenaeux with Jessop and he was only on the field for a couple of minutes before he was able to unsettle the home defence. Winning the ball, he found Grayson. The Trinity number nine found Waldock with a clever ball, but his shot was blocked by Pilling as Trinity began to enjoy one of their better spells of the afternoon.

A quick throw on the right, saw Alex Wollerton link up with Brad Grayson and then Butroid, before the attacking midfielder got on the ball again and hit a shot on the spin that didn't trouble Pilling What Trinity lacked at times, in quality, they made up for in heart- and never say die spirit. And that was very much in evidence as Shaw's men wouldn't give up after a mis-placed pass and competed intensely in the middle of the park, resulting in an ambitious thirty yard Grayson snapshot, that on another day, would fly in!

And with Tonks' throws an ever ready weapon. Trinity's defensive unit stood firm, recording that impressive fourth shut out to secure a share of the spoils.

With a couple of sessions on the training ground, before consecutive Saturday home games (Atherton Collieries in the league, followed by Coalville Town in the Trophy) Tom Shaw's Holy Blues will be hopeful of extending our unbeaten run and climbing the PitchingIn Northern Premier League table