546 witnessed Gainsborough Trinity make it seven games unbeaten with a gritty victory over Atherton Collieries, on a bitingly cold afternoon at the Gainsborough Martin & Co Arena, Bradley Grayson netting the only goal of the game, to the delight of the Trinity faithful. Making three changes to the side that drew with Stafford Rangers last time out, Sam Long made his debut between the sticks, replacing Harvey Cartwright following the completion of his one month loan.

Callum Minkley was recalled to the starting line up, as Club Captain Lewis Carr battled the after effects of illness, while Oliver Greaves started in place of Rio Molyneaux, who dropped to the bench for this afternoon’s clash. There was a welcome return to the matchday squad for long term injured duo, Curtis Morrison and Matt Yates. Head Coach Tom Shaw delighted with the progress his squad is making in their quest to return to fitness.

In an engaging first half, it wasn’t all plain sailing for the Holy Blues though, as inside thirty seconds, Jack Lenehan pounced on a momentary lapse in concentration, but his finished lacked the composure, as he sent his effort past the post, much to the relief of the Trinity debutant between the sticks. On eight minutes, it was Matty Gillam this time, who looked to punish some lax Trinity defending. Two failed defensive headers saw the former Trinity trialist in on goal, but he flashed his effort wide of Long’s left hand upright.

Bradley Grayson was on hand to continue his fine run of form in front of goal, in the right place at the right time to fire past Luke Hutchinson to give Gainsborough the lead against the run of play. A move of real quality, the Trinity attack swept from one end of the field to the other. Starting with a Joe Wilson throw in, deep in defence, Greaves found Alex Wollerton who switched play s 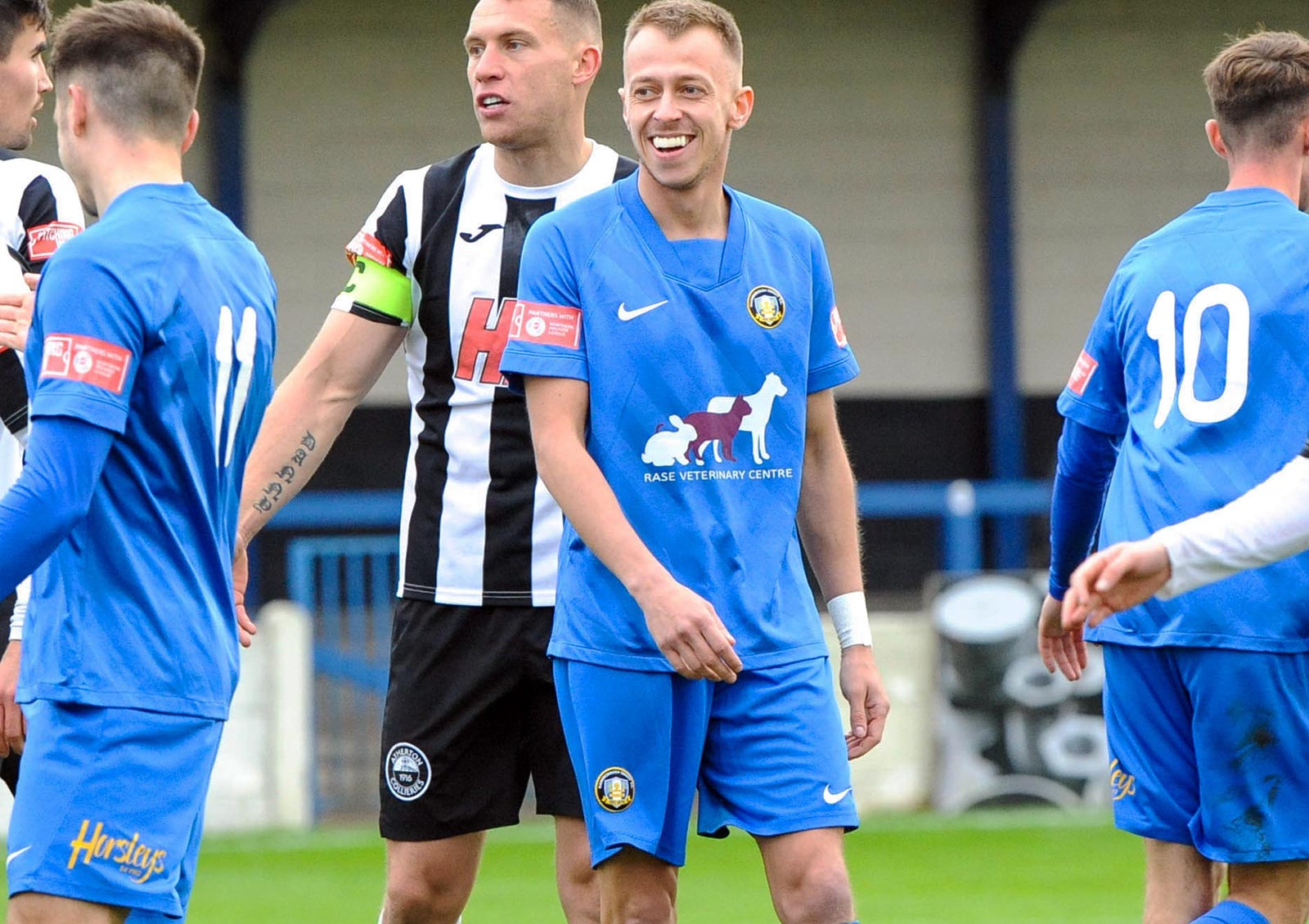 ublimely. Releasing Lewis Butroid down the left. His pinpoint cross found Grayson who netted his fourth goal in ten games for the Holy Blues.

A floated right wing corner found the unmarked Danny Lafferty round the back, but he was unable to generate any power into his header and he didn’t trouble Long in the Gainsborough goal. Not long after, a Scott Sephton long throw was only partially cleared and Aaron Smith’s snap shot, from the penalty spot, flew narrowly past the post.

On the half hour mark, a Sephton handball was spotted by the referee, as Grayson looked to sniff out a second. And Hutchinson had to be alert, reacting to push Lewis Butroid’s resultant free kick away from danger after his ball into the box evaded everybody – except the visiting ‘keeper. Grayson’s improved chip from the follow up sailing harmlessly wide of post and bar.

Sephton continued to offer a long throw threat for the visitors, but Minkley, Jemson and Bishop stood admirably up to the task, nullifying the threat of Gillam up top for Atherton.

As the half drew to a close, Sam Long pulled off a world class save to deny Lenehan. As the flag stayed down, Lenehan checked back onto his right foot and curled an effort towards the postage stamp. Springing into action and throwing himself up and away to his left, Long clawed the ball behind for a corner, leaving the Colls’ attacker frustrated – and the visiting bench wondering how they hadn’t equalised. The save sparked Trinity into life and with Grayson and Wollerton hunting in packs, Trinity won the ball high and went straight for the throat. Wollerton slipped in Greaves – with a little ball back across the face of goal. Wollerton had the goal at his mercy, only to shoot straight at Hutchinson.

From the resultant corner, Atherton couldn’t clear the danger and Grayson’s rasping effort was well held under pressure by the visiting shot stopper, keeping the Gainsborough score at one. Half time: Gainsborough Trinity 1 Atherton Collieries 0.

With no changes for either side at half time, the second period started slowly, before a quickly taken Neal Bishop free-kick released the Trinity goalscorer down the right and with Grayson turning provider, his cut back found Wollerton arriving late, but Hutchinson again protected his goal, tipping over for a corner, when a finish to the left or right of the ‘keeper would have given him no chance! Niall Battersby’s effort was bravely blocked by Bishop at the near post, as the right back made a run across the front post. The veteran not allowing anything past him whilst he’s on duty.

Man of the Match Charlie Jemson, relishing his defensive duties won the ball back in the middle of the park for the Holy Blues. And with Alex Wollerton stepping onto the ball inside the centre circle, he split the Colls’ defence. Finding Grayson, the forward’s options were limited as he only had two men to choose from in the middle, his lifted centre, finding neither.

Just past the hour, we saw the welcome return of Curtis Morrison. On off the bench, he had (in total) a thirty minute cameo, as he looks to work his way back to full fitness. The visitors also making a change at the same time as Dylan Glass replaced Gillam, looking to deploy the full backs further forward, in search of more cutting edge to their play. Their gamble was very nearly rewarded when Gareth Peat went on a jinxing run from full back, ruffling the side netting. As the game became increasingly fragmented, Trinity were able to see out the remaining time, including six additional minutes of play and a twenty man melee to secure all three points.

Moving us up to thirteenth in the table, with a seventh game unbeaten as we break for the FA Trophy and another home game next Saturday, when we entertain Coalville Town at the Gainsborough Martin & Co Arena. A game that wasn’t polished, but was rewarded with three points and two Trinity moments of real quality at opposite ends of the pitch that earned the points for the side in blue.