Gainsborough Trinity cruised through to the next round of the FA Trophy with an accomplished display against Southern Premier League high fliers, Coalville Town. With goals from Bradley Grayson, Toby Gould and Isaac Rice on the mark for the rampant Blues, Trinity clipped The Ravens wings on the way to going eight games unbeaten in all competitions. Head Coach Tom Shaw made two changes to the side that won 1-0 last time out, with starts for Lewis Carr and Curtis Morrison. Neal Bishop and Oliver Greaves dropping to the bench as Shaw strived to keep his side sharp, with all players getting invaluable game time, with a busy seven days ahead for his Trinity side.

Coalville were quickly out of the traps - and on the front foot, but wasted a couple of early chances to deliver good quality into the Gainsborough box. And Trinity made them pay. Taking the lead inside four minutes. Alex Wollerton, who would go on to put in a man of the match performance at the heart of the home midfield, drove forwards, slipping a neat ball in for Curtis Morrison. Morrison's cutback found the in form Grayson, who swept home to the delight of the home support. Serenading the Trinity fans with a quick 'air guitar solo' with the corner flag as his only prop.

Coalville went on to dominate large chunks of possession, but offered little as an attacking threat, with Sam Long a virtual spectator for long periods. The only real shot of anger coming late in the half, when a stinging Tim Berridge shot was bravely blocked by Isaac Rice, before it could even reach Long, between the sticks. On loan Owl, Liam Waldock then released Butroid down the left, and his devilish ball into the box was only partially cleared, but Grayson couldn’t add to his tally as he was unable to lift the ball over the advancing Bukowski. Half time: Gainsborough Trinity 1 Coalville Town 0.

The second half started brightly for Trinity. Wollerton’s perfectly weighted through ball caught Bukowski in no man’s land. The tireless Grayson nipping in ahead of the ‘keeper, bu 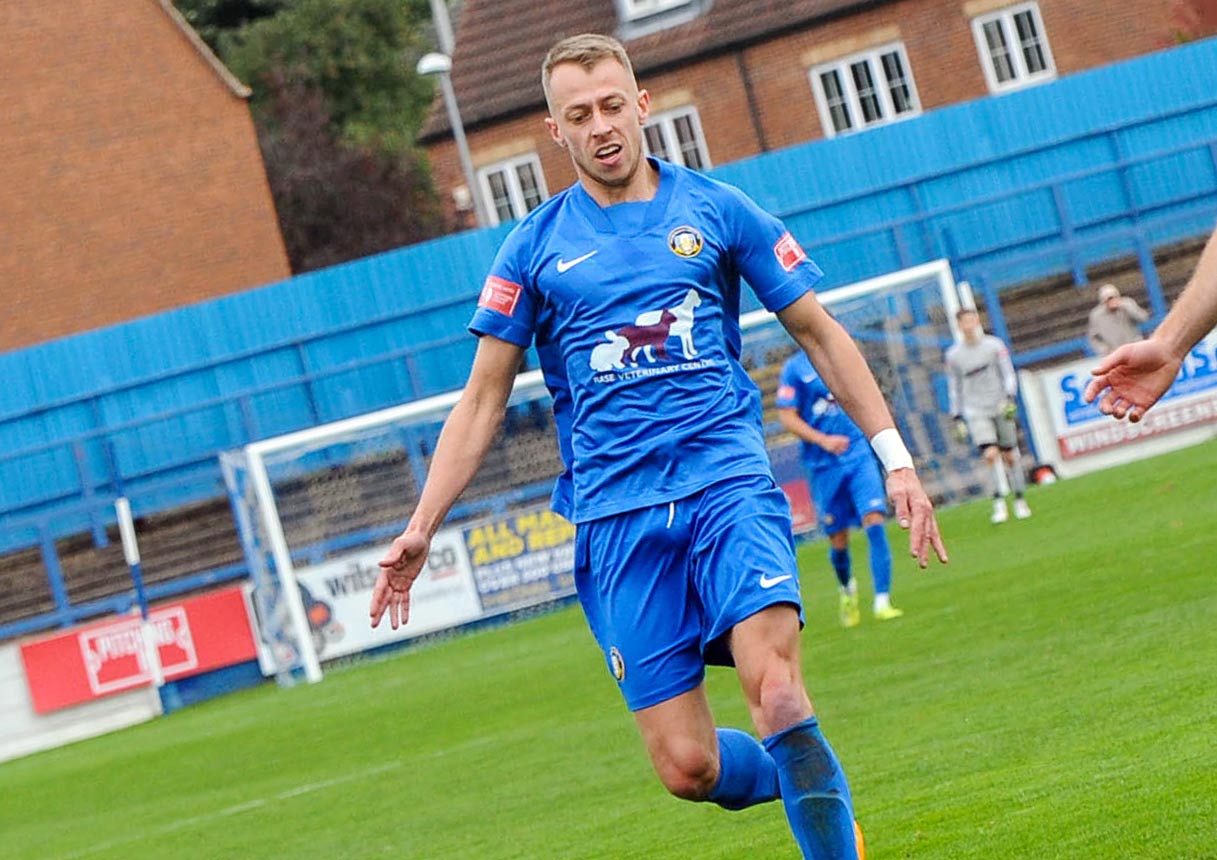 t he was forced wide. Coalville’s number one, not committing to the challenge and Grayson having to be content with a corner kick for his efforts. Waldock’s raking cross field pass then found Grayson, who tied his defender up in knots as he twisted one way, then the next. Working room to get a shot away, he saw his effort deflect away for another corner, as Trinity looked to stretch the advantage.

Harry Jessop went close to extending the Gainsborough lead, getting on the end of a beautiful ball in from Butroid, but the young forward couldn’t quite steer his effort past the visiting goalkeeper.

The closest Coalville came to equalising, was when substitute Ravens’ substitute Connor Smith headed wide when well placed. And his side were made to pay, despite seeing more of the ball, they were unable to really test the Gainsborough back line. And Trinity did add a second, when Charlie Jemson’s headed clearance inadvertently found Jessop. Jessop rounded the ‘keeper but Bukowski was equal to his effort, but kindly, the ball fell back to the feet of the on loan Scunthorpe man, and he had the presence of mind to find fellow substitute Toby Gould. Gould took his time, regained his composure, taking an extra touch, before finishing unerringly past the 'keeper, to give the home side the breathing space their performance deserved.

Again, Jessop was involved, but it was Wollerton who pulled the strings, orchestrating the Trinity tempo as he set Wilson away down the right- and his composed centre picked out Isaac Rice, who put the seal on a fine performance for the Holy Blues, sliding home at the back post to open his account for the Holy Blues. Trinity now wait until 1pm on Monday for the Buildbase FA Trophy draw to see who lies in wait, a week on Saturday. Another home draw anybody?