The Holy Blues made it four points in seven days following up the point at home to Warrington last Saturday by avenging the 5-1 reversal back in August, with a resolute victory on home soil over Bamber Bridge. Second half goals coming from Cieron Keane and Bradley Grayson after the dismissal of Paul Dawson with over half an hour to play. Head Coach Tom Shaw made two changes to the side that drew 1-1 last time out. Manni Norkett impressing in training and handed a start as Brad Grayson started on the bench. There was no Isaac Rice in the sixteen, as Callum Minkley was drafted in at right back, freeing Joe Wilson up to play further forward. George Hornshaw continued at left back, having impressed at full back last weekend.

Bamber Bridge started the game in the way they would go on, with lots of possession, but the first half chance of the opening period fell Trinity’s way. Alex Wollerton won the ball back for Trinity and he set Toby Gould away down the left. His early ball picked out Manni Norkett, but the Manchester United youngster couldn’t quite adjust his feet and wouldn’t test the visiting goalkeeper. Dan Martin floated in a free kick into the danger area. But Rodwell-Grant couldn’t poke his effort on target. Good defensive work from George Hornshaw ensuring the Brig centre forward didn’t get a clear sight of the ball onto his foot.

Matt Yates was called into action with a smart double save. The first to deny Rodwell-Grant, before getting back into position to help a Paul Dawson effort from the edge of the box over the bar. Bamber won a number of corners, but couldn’t find a way to penetrate a stubborn Gainsborough defence. Matt Thomson firing over the angle of post and bar after a training ground routine didn’t quite come off for the visitors. Thomson, with the number two on his back, was playing more as a winger at the time. And when he came forward, he had ‘keeper Yates worried as he fizzed an effort narrowly over the bar from the edge of the box.

From defence to attack, Norkett and Wilson combined on the counter, but a kind deflection for the vis 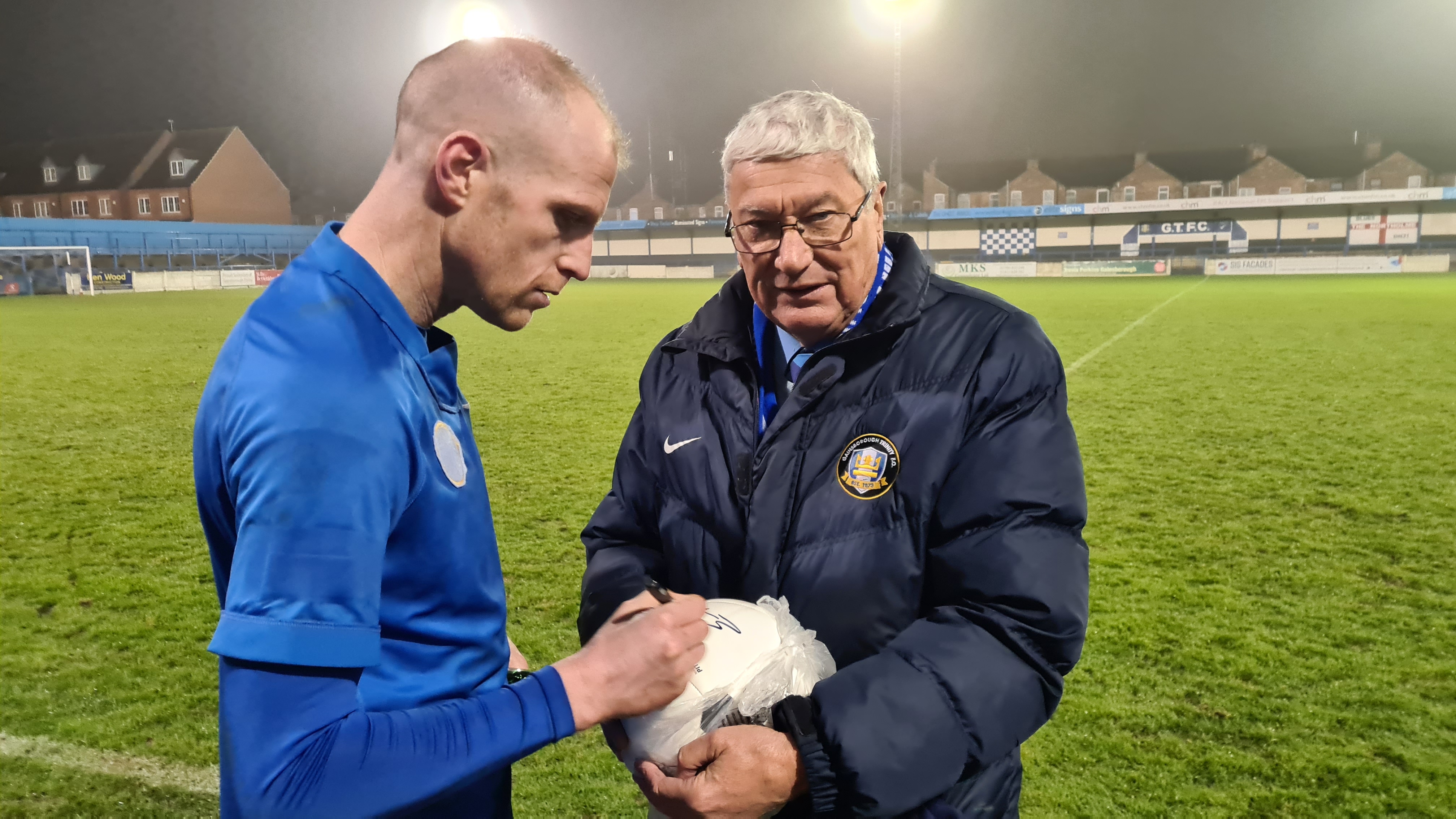 itors made the final ball easier to deal with, Cottam turning the ball behind for a Trinity corner. An enforced change in first half stoppage time saw Alex Wollerton replaced by Cieron Keane. Few would expect what the next hour would bring for the Republic of Ireland U19 cap.

At the break, Shaw made a second change throwing on top scorer Bradley Grayson for the debutant Norkett as the Head Coach shuffled the pack, looking to give Trinity a foothold in the game and more of an attacking threat.

A crazy eight-minute spell in the second period saw Bamber Bridge reduced to ten men, when Paul Dawson saw red for a two-footed lunge on Joe Wilson, before two goals in four minutes took the game away from the visitors.

Cieron Keane unleashed a long-range rocket to open the scoring as the visitors still adjusted to being down numerically. Bamber Bridge unable to clear the danger from a Wilson corner kick, Gould let fly, his effort was too hot to hold, with Cottam spilling the ball under pressure from Bacon and Keane was on hand to win the ball back, shift the ball onto his left and fire an unstoppable effort past the visiting custodian.

Keane then turned provider four minutes later, when he picked the right pass to unlock the Brig defence, providing Grayson with a shooting chance, the chief goal-getter gobbling up the chance with glee, to give the Holy Blues the two-goal advantage. And from there, there was no coming back for Bamber Bridge, who despite still dominating large spells of possession, would be unable to find a way through the Trinity rear guard.

When the back line was pierced, Yates was on hand to bravely deny the opposition. A ball whipped in from the Trinity left saw the experienced Nathan Pond as favourite, but Trinity’s stopper was fearless, throwing himself at the feet of the former Fleetwood and Salford giant.

Yates got down to his right to make a routine save from Skinner’s headed effort, but it was from his release that Keane was strong in the challenge to retain possession for the Holy Blues. Scampering down the left, he got his head up well to find Gould. His effort finding the target, but not finding away past Cottam.

Bamber Bridge did have the ball in the back of the net, but the goal was soon ruled out. The Assistant Referee on the far side deeming the ball to have been carried behind the dead ball line by Brig substitute Adam Dawson, as he set himself to cross. Grayson then let fly after good pressure from Curtis Morrison to present a half chance for the half time sub, before Gould had another opportunity to add to his season’s tally. Morrison slipped in the attacker, looking to cap his birthday with a goal, only to see his effort brilliantly saved by Cottam. The goalkeeper making himself big as he came out to narrow the angle.

Trinity are next in action on Tuesday night, when once again The Gainsborough Martin and Co Arena is the destination, this time Hyde United are the opposition. Can the Holy Blues make it seven points from nine in the run up to Christmas? Be with us as we look to secure three points and continue climbing away from the foot of the table.