A late Brad Roscoe strike cancelled out Declan Bacon’s first half opener to prevent the Holy Blues from securing all three points and ending 2021 with a home win. Unbeaten in three at home though, Trinity head into the Lincolnshire derby away at Grantham on the 27th in good form having picked up five points against Warrington, Bamber Bridge and Hyde United. Head Coach, Tom Shaw made two personnel changes from the side that beat Bamber Bridge last time out, with a couple of positional tweaks. Goal scorers Brad Grayson and Cieron Keane were restored to the starting eleven, while Mani Norkett was on the bench, it was too soon for Alex Wollerton, who limped out of the Brig game at the weekend.

Tom Pratt got in down the Trinity right, but alert defending from George Hornshaw round on the cover did well to snuff out the threat, before it was the left back who was involved again, this time in an attacking sense. His lofted ball into the box found Brad Grayson who turned sharply, but when confronted with the opposition keeper, he was unable to steer his effort past the visiting shot stopper.

Grayson did well to bring down Matt Yates’ long free kick forward, teeing up Cieron Keane, but leaning back, Saturday’s hero didn’t trouble Green. Green was first to be properly tested. Cieron Keane’s devilishly whipped in near post corner was turned goal wards by veteran Neal Bishop who could only hold his head in disbelief. Green making himself big, but not knowing too much about the save.

Grayson was full of endeavour as he twisted and turned on the right, but he was unable to pick out his strike partner as Trinity threatened, From an inventive Keane corner kick, Bishop found himself with the goal at his mercy, but he skewed his effort wide when well placed, much to his own frustration. As half time approached, Trinity began to turn the screw, Grayson had a sighter flashing wide of the far post after a good spin. Trinity’s leading marksman then turned provider when he combined with Joe Wilson. Wilson applying the after-burners to reach the by-li 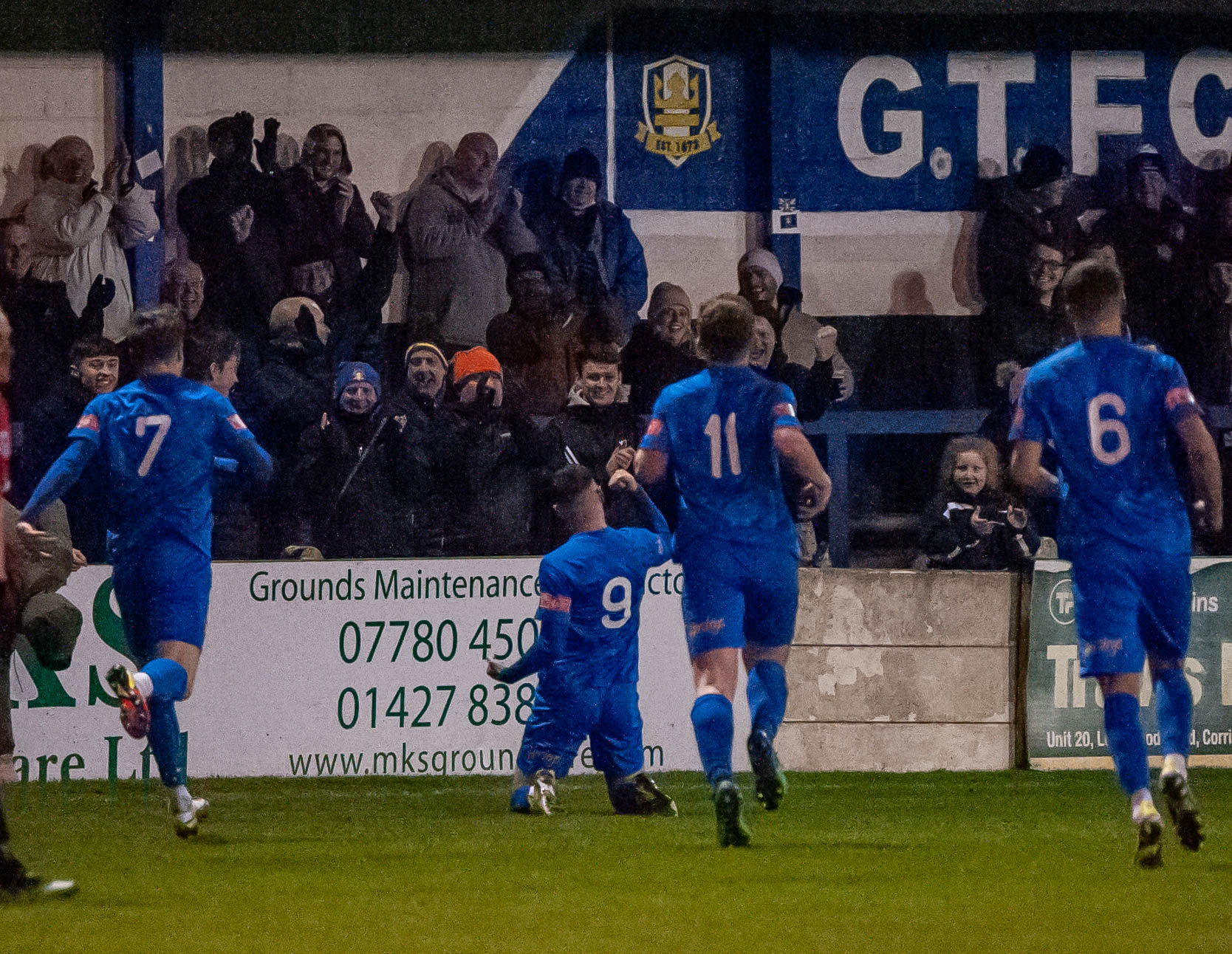 ne and cut back for Bacon to notch his first for the club since returning from Mickleover. Just reward for some tireless performances up front in Tom Shaw’s new look side.

The Holy Blues would go in at half time a goal to the good – but only thanks to a smart Matt Yates save, getting down well to save a point blank header little more than a minute after going in front. Jack Dyche then hooked an effort towards Yates’ goal, but his effort lacked any real conviction. Ending in the grateful arms of Yates.

Ikpakwu did well to win the initial ball, before Priffti fed the visiting skipper, but he couldn’t fire an effort on target as he signalled Hyde’s intent at the start of the second half. The pressure of the retreating Wilson and Bishop enough to unsteady the forward.

Pratt’s cut back then found the off balance Tongue, who couldn’t direct his effort goal wards for Hyde. Liam Tongue’s in swinging corner was inadvertently turned towards his own goal by half time substitute Elicha Ahui, but his blushes were spared as Yates got down bravely to his right, before hacking the ball clear of the danger zone with his feet.

There was a moment of confusion when referee Ben Tomlinson pointed to the spot. Manni Norkett just on as sub, was adjudged to have fouled Harry Ditchfield, but the Assistant Referee on the far side of the ground felt he had the better view, signalling for a free kick rather than the penalty originally awarded. The free kick coming to nothing.

Matt Yates, in the Trinity goal, continued to dominate his area. Helping relieve build ups in pressure, exerted by the visiting side searching for an equaliser. Brad Roscoe did well defensively, after the perseverance of Norkett saw him rob Brownhill on the Hyde left, with good endeavour. The forward looked to pick out Bacon, but the door was slammed shut by Roscoe, putting the ball behind for a corner. Tongue and Pratt combined, as the latter didn’t manage to make a good connection following the number tens’ clever flick around the corner.

Norkett was involved again in an action packed cameo as he out-muscled Ditchfield this time, his little ball into the path of Bacon, just not ahead of his striking partner to enable the front man to take a touch, or get a shot away. Popping up on the left of the attack, Norkett read the bounce of the ball better than Ditchfield, but the on loan Manchester United youngster could only ruffle the side netting.

The Tigers had their equaliser, when Brad Roscoe flicked home Ditchfield’s centre after the full back was given too much time to set himself and deliver from the Hyde right wing. And despite throwing on Curtis Morrison for the closing stages, Trinity couldn’t find a late winner. Trinity ending the year, on home turf, with a point. Disappointing not to secure all three points, but a result that extends the unbeaten streak, and the prospect of travelling to the Meres to take on Grantham in the Lincolnshire derby next. We hope you will be able to back us in big numbers on the 27th!