Jovon Makama came off the bench to magic an equaliser seven minutes from time as an injury ravaged Gainsborough Trinity side took a share of the spoils at the South Keversten Sports Stadium. The hard fought point extending the Holy Blues' unbeaten run to four on the spin, as the hard to beat Trinity side look to build momentum and climb away from the lower reaches of the PitchingIn Northern Premier League table.

The Holy Blues, led by Assistant Manager Jake Sheridan in the absence of four members of the first team set up through Covid related isolation and a further player missing through inury, made three changes from the side that secured a point at home to Hyde United. Charlie Jemson was restored to the starting eleven, with club captain Lewis Carr and fellow centre back Callum Minkley having tested positive over the Christmas period. Isaac Rice slotting in at left back, while 17 year old Elisha Ahui was handed a start in the centre of the park.

Inside the opening couple of minutes, Bradley Grayson saw appeals for a penalty turned away. Mr Jackson the man in the middle opting to award the free kick marginally outside the box. Grayson's resulting free-kick crying out for a decisive touch at the back post.

Bishop and the larger than life Gregg Smith locked horns on numerous occasions, as both men relished the battle of wills. Trinity were already up against it, facing no fewer than six former Gainsborough players in the Grantham side, and things would become tougher still for Sheridan's Blues, when inside the opening quarter of an hour, Jemson was forced off (with what was to be confirmed as a dislocated shoulder) to be replaced by George Hornshaw. 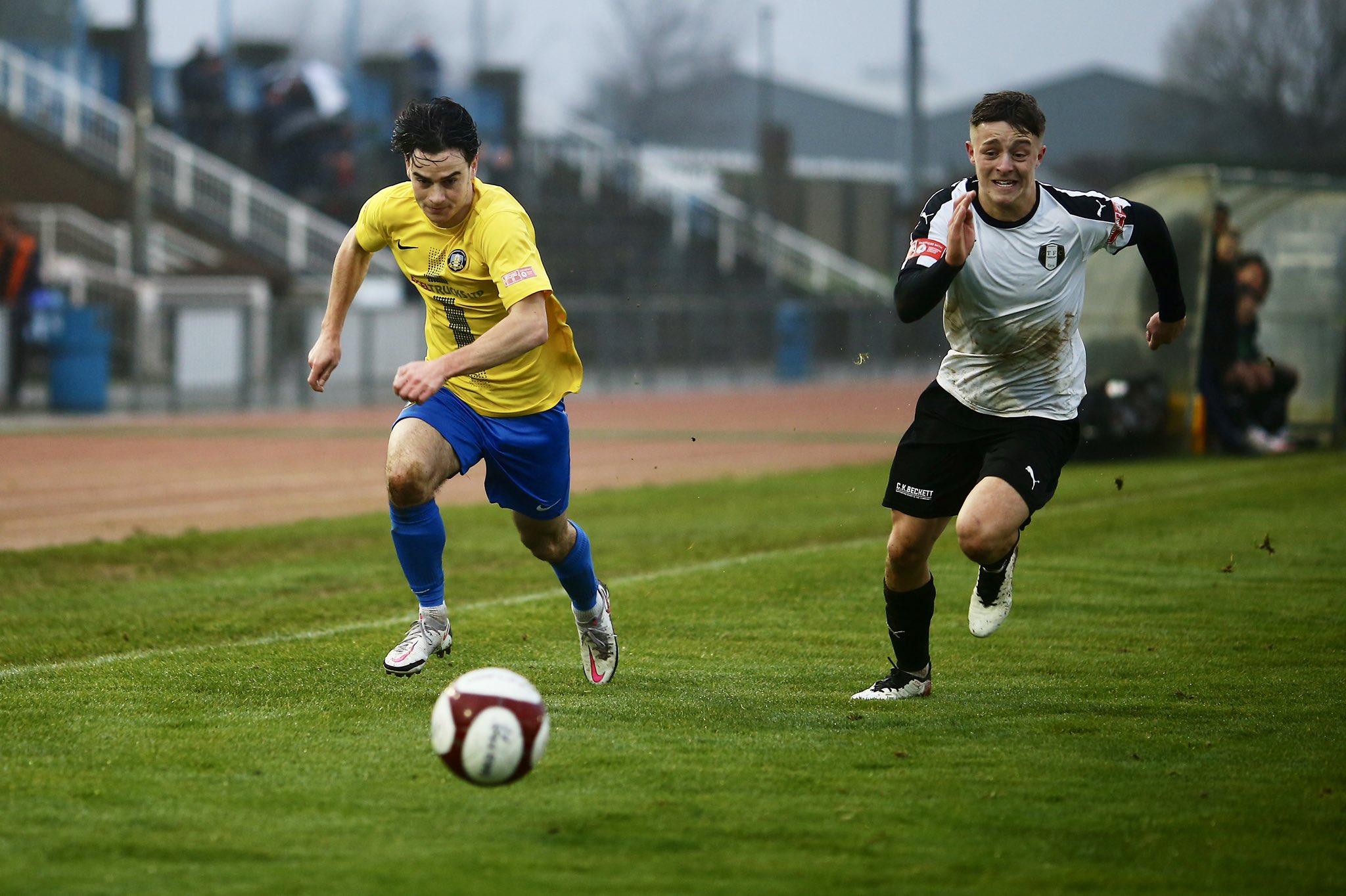 settle into their stride. Alert defending from Hornshaw saw him make up the ground well, to put in a strong sliding block as the home side made the early running.

After good play down the Gingerbread's right, Ali Adeymir picked out Ricky Miller, who rattled the underside of the cross bar from twelve yards out, with Yates beaten.

Just before the half hour mark, Keane tried his luck from a twenty-five yard free-kick. The attempt up and over the wall whistling a yard wide of James Pollard's left hand upright.

Trinity's plans were further decimated, when skipper for the day - the returning Isaac Rice - hobbled out of the action. Curtis Morrison the chosen replacement with an hour still to play.

Further tactical tweaks were required to move bodies around - and after Morrison had given away a free kick early after his introduction, one of a plethero of former Gainsborough men, Jonathan Wafula popped up to head home unmarked from six yards out

The goal against focussed Sheridan's men - and in the final quarter of an hour up until half time - looked the more likely to score the next goal. A string of corners from Keane, delivered in from both flanks causing panic and confusion in the Gingerbread's ranks. Just the final telling touch missing for the Holy Blues.

Shortly after going behind, Toby Gould did well to get to the by-line. His whipped in ball found Grayson, who volleyed narrowly wide from ten yards. Teenage Ahui rose highest to head a Cieron Keane centre back from where it had came. Looking on in anguish as his powerful header was cleared from underneath his own cross bar by Rod Orlando-Young. Before Parkin's header from Keane's cross was cleared off the line by Smith to deny the Holy Blues twice in twenty seconds.

At the start of the second period, a devilish Keane corner from the right found it's way to Ahui, but he couldn't adjust his feet and the ball looped into the grateful hands of Pollard. Grayson then did well to hold the ball and set Bacon to shoot - but Cook was quickly in with the block charging down the striker's early effort.

Grayson then swivelling in the box to finish, his effort beating Pollard, but not the alert Adeymir on the line!

Shortly after coming on as sub, Lee Shaw won possession on the right hand side, breaking into the box - under pressure from the retreating Bishop, Shaw dragged his effort horribly wide when well placed.

Makama looked lively following his own introduction as he twisted and turned, looking to create space out on the right. And Trinity were level, Keane won the ball back from Grantham & Hornshaw found the feet of Makama. The on loan Lincoln City youngster fed Wilson, bombing on from full back, before demanding the ball back to feet. The 6' 5" teenage talent then took matters into his own hands. Powering in from the right side of the box, he fired a fierce left-footed bullet into Pollard's top right hand corner giving the 'keeper no chance.

Immediately after equalising, Smith flicked a ball through for Shaw, but as the substitute looked to pull the trigger, he was denied by a combination of Yates and Joe Parkin. Smith was again provider for Shaw as a deft ball over the top found his Grantham colleague. But as Shaw tried to lift the ball over the approaching Yates. The Trinity goalkeeper read the effort, making a comfortable save.

As time ticked down, Keane then beat his man and delivered a telling cross to the near post, Makama was millimetres away from connecting. And Bacon on the turn saw his effort blocked by Williamson and Pollard to further frustrate the visitors.

The patched up Holy Blues, disappointed to return to Gainsborough with only a point from a sterling effort in trying circumstances. As next on the agenda for Trinity is the New Year’s Day clash, against table topping Matlock Town at the Gainsborough Martin and Co Arena (3pm, Sunday)