On a sun-soaked afternoon in Lincolnshire, Gainsborough Trinity and Nantwich Town played out a goal-less draw, where both goalkeepers were rarely troubled. And defences were the winners on the day as neither side's attacking threats really fired on all cylinders. Trinity made three changes from the side defeated at the death last time out as Isaac Rice and Cieron Keane were restored to the starting eleven, while Josh Hines made his debut, arriving from Hull City in the week.

Callum Minkley missed out through injury, as Morgan Worsfold-Gregg and Tom Cursons dropped to the bench. Also named amongst the substitutes was Jack Gibson following the completion of his one month loan at Belper.The visiting Dabbers' named Sam Tickle between the posts in the absence of Matt Gould. Called up for international duty with New Zealand, Nantwich Town brought in the Wigan Athletic youngster, while other recent addition Jon Moran had to settle for a place on the bench. And despite their recent upturn in fortunes, the visitors were also without Daniel Cockerline, their focal point in attack.

Matty Bell had the first effort of the game as his twenty yard effort sailed harmlessly over the Stuart Horsley stand roof, after Gainsborough struggled to clear their lines. Trinity looked to start brightly, with Jovon Makama causing one or two problems with both Jamie Morgan and Troy Bourne finding their way into the referee’s notebook early on. It was inside eight minutes that Morgan had his name taken by Referee Ian Johnstone after Makama had got the better of the full back, before being tugged back.

Cockerline's replacement at number nine, Jacob Bickerstaff was well marshalled by the imperious Stefan Galinksi and the returning Isaac Rice. As both sets of forwards found it virtually impossible to penetrate two stubborn defences. Freddie Draper tried to 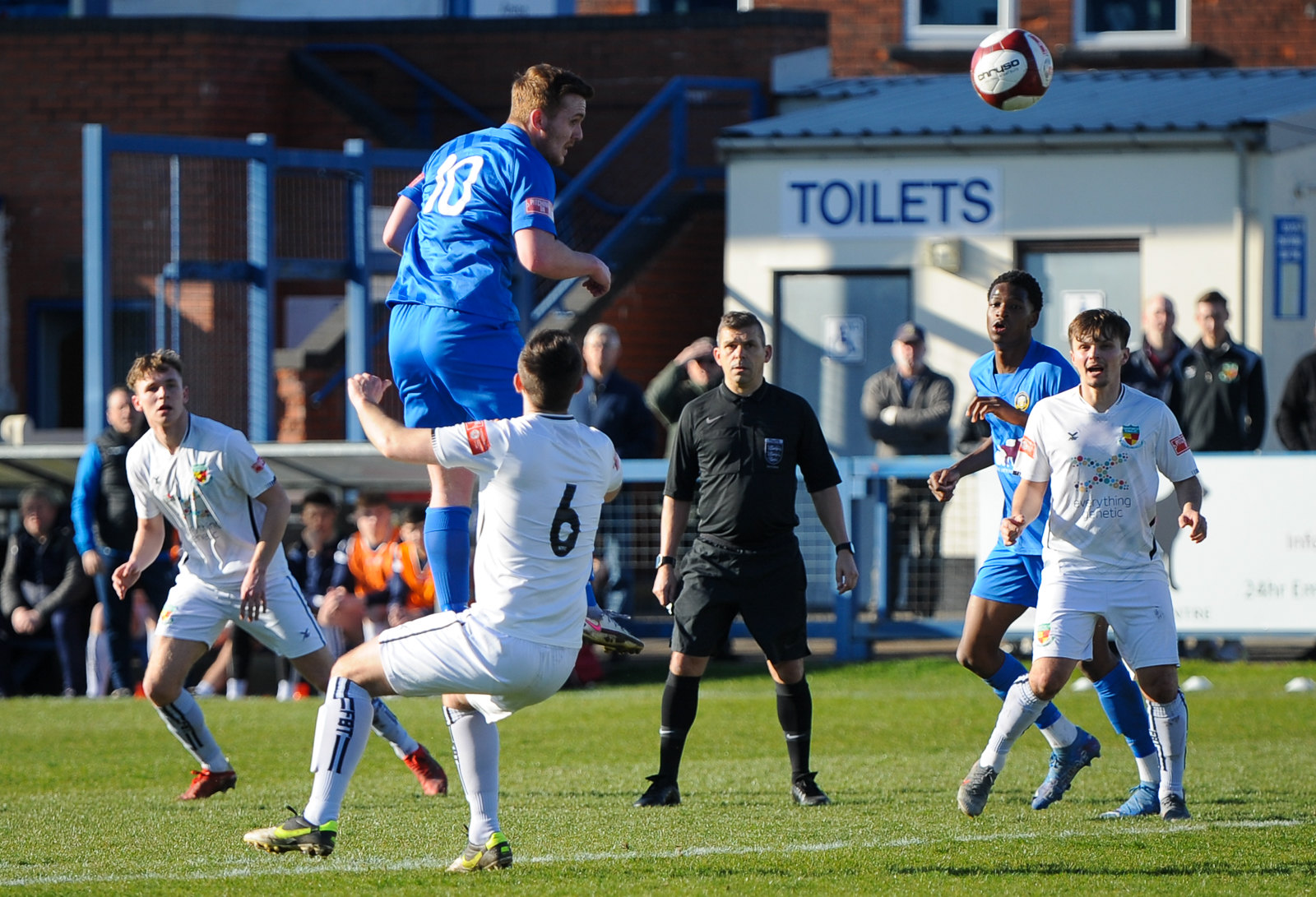 fashion a shooting chance after Prosper Keto's throw in wasn't cleared. But the Lincoln City loanee, like Bell at the other end before him, failed to make the goalkeeper work.

Chances were at a premium for both sides, but Tickle was required to tip over Elicha Ahui’s late first half effort, as the Holy Blues asked one or two questions. With veteran, Neal Bishop covering every blade of grass in the middle of the park, working in tandem alongside Keane, the pair were ever available options. And when Keane delivered an inviting ball across the face of goal, the home faithful were urging a blue shirt to commit. Any touch from three yards out would have left Tickle redundant.

The second half started in a similar pattern to the first, with both sides demonstrating no little effort, but really lacking quality. Just before the hour mark though, Cieron Keane almost provided one of Cieron Keane's trademark wonder-strikes, as he strode on to a loose ball in the middle of the park and narrowly steered an effort just over Tickle’s goal frame. A rare moment of quality to light up a game lacking in the final third for both sides.

With just under half an hour to play, Dave Cooke replaced Shaun Miller with Carlos Monefiori - and he provided a tricky outlet on the left hand side. Set free by Sean Cooke, Monefiori forced Matt Yates into his only save of the game, a smart stop down at his near post. From the resulting corner, Josh Langley was unable to keep his header down from Matt Bell’s deep centre. Prosper Keto again excelled for the home side as he looked to get up and down the left hand side, enjoying a good battle against the experienced Joel Stair. Bishop almost found a way through the Nantwich defence when he released the marauding Keto, only to see the referee award the free kick as Keto really got forward well.

In the end, a point a piece was probably the fairest of results in the spring sunshine. The points shared at the Gainsborough Martin and Co Arena. Coming up next, Tom Shaw's Holy Blues are faced with two away games in four days, in the North West. Atherton Collieries the destination, before the trip to Hyde United on Saturday. The side who leapfrogged Trinity courtesy of a last minute winner in the five goal thriller with Witton Albion. We move onwards, and forwards, together.