Two long throws ultimately undid the Holy Blues in the penultimate away day of the season as strikes from Michael Coulson and Luca Colville applied the finishing touches leaving the Holy Blues with nothing to show for their East coast endeavors. Injury robbed Tom Shaw of full backs Prosper Keto and Joe Wilson, while Callum Minkley and Joe Parkin were also missing due to injury. Neal Bishop wasn't risked against one of his former clubs, while a number of starters were playing with knocks - and in truth shouldn't have started, but needs must as Shaw's options saw the side down to it's bare bones.

Elicha Ahui started at full back, with Morgan Worsfold-Gregg partnering Cieron Keane in the middle of the park. Cameron Johnson and Tom Cursons again putting shifts in on the flanks. Jake Sheridan was again named on the bench, four years after injury curtailed his playing career. Matt Yates was first called into action when a deep Ryan Watson corner was headed up in the air by Isaac Rice, with the ‘keeper doing well to claim the hanging ball under pressure. At the other end Jack Gibson and Jovon Makama occupied the visiting centre backs, hassling well to win a corner of our own. Shaw's men started well and prevented the hosts from playing in dangerous areas, with the hosts relying on set pieces with the threat of Will Thornton and Bailey Gooda up from the back regulars in the Trinity area. Yates looking to dominate his box and relieve the pressure, in the opening half hour.

The first real chance for the home side came when ‘Boro secured possession in the final third, and Plant’s effort was charged down, fortuitously finding its way out to Ashley Jackson and his ball from the left flashed across the face of goal, with Kieran Weledji inches from connecting, as both full backs looked to get forward. Good play from Makama held the ball up for Trinity, as he outmuscled Gooda on half way. His lay-off found Gibson. Gibson’s return ball was behind his strike par 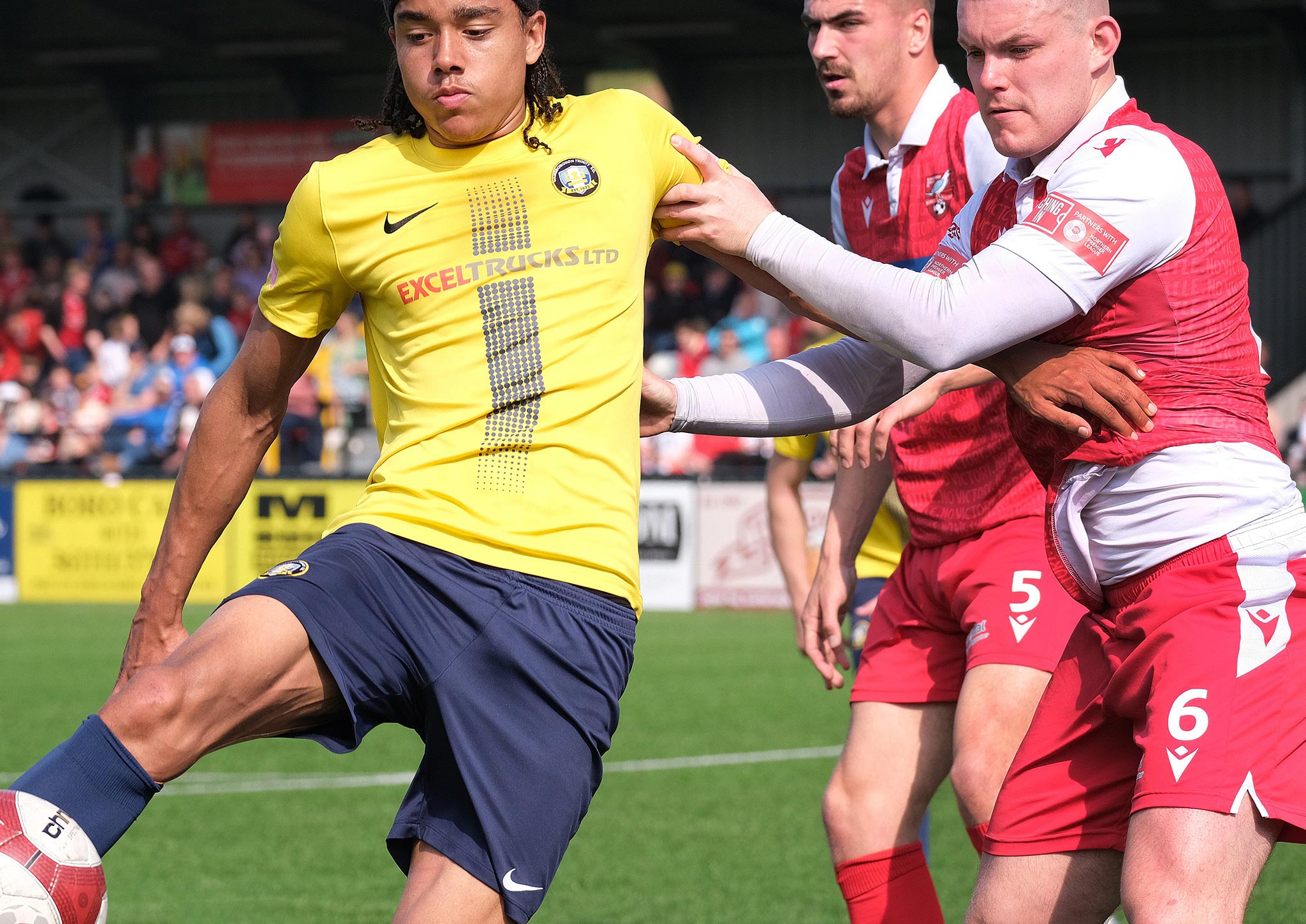 tner, but Tom Cursons made up the ground well, cutting in from the right, his shot was straight at the retreating Gooda, but promising signs of a good link up between the trio.

Watson then invited Lewis Maloney forward to get a shot away, comfortably saved by Yates at the foot of his left hand post, before thirty seconds later, Maloney again took aim, from further out, his bouncing effort a little more awkward for the Trinity number one.

Hornshaw had to be alert at the back post as Jackson again delivered a cross on the run as the home side upped the ante approaching half time, the Seadogs camped in Gainsborough territory in the final ten minutes of the first half, Trinity looked to have weathered the storm, appearing as though we'd go in at the break on level terms. Skipper Michael Coulson swivelling to fire home after the Blues failed to clear one of Jackson's countless long throws.

Incandescent with rage, Shaw found his name into the referee's notebook when he complained a little too vehemently to the man in the middle regarding the duration of the half and from where the flame haired left back was allowed to launch his missiles into the heart of the Trinity defence from. Half time: Scarborough Athletic 1 Gainsborough Trinity 0.

The Holy Blues were by no means out of it at the break - and with only a goal in it, believed there was still something to be taken from the game. Trinity failed to clear a Ryan Watson corner, and Gooda dragged his effort wide of the post. From the goal kick, Gainsborough could have found themselves back on terms. Perseverance from Johnson brought him an opportunity. As Weledji looked to shepherd the ball back to his 'keeper, the forward got between the two, only to lift the resulting effort over the bar, with the goal gaping. A difficult chance facing away from goal – and happening at speed, but a chance nonetheless.

A quick throw in down the right saw former Blue, Will Thornton miss his kick completely and Cursons powered into the box. His effort straight at the goalkeeper, as Ryan Whitley saved with his legs, before gathering safely into his grasp. Immediately after the introduction of Jake Day, the Blues switched off, Jackson's long throw travelled all the way across the face of goal, and Luca Colville fired through a crowded goal mouth to double the home side's advantage.

It could have been three, when another Jackson throw in wasn’t dealt with. Watson smashing the loose ball goalwards. His effort beaten away by Yates, before Thornton headed Luca Colville’s cross wide of the target. From Ahui’s throw in, sub Toby Gould saw an effort turned onto the post by Whitley as Trinity looked for a way back into the game And then Rice blazed over when crying out for composure as time ticked towards full time.

Will Jarvis, on as a Seadogs substitute looked lively following his introduction, but spoilt his finish, with Yates able to gather gratefully. The on loan Hull winger did better on his next foray forward, crossing on the run for Day. The big centre forward's first touch taking him away from the Trinity goal.

But it was to be an ultimately frustrating afternoon by the seaside for Tom Shaw's men, who had come with a plan, but were undone by two lapses of concentration and unable to take a couple of chances of our own when they presented themselves. Onwards and forwards, we head on to the Lincolnshire derby, when we welcome already relegated Grantham Town to the Gainsborough Martin and Co Arena on Bank Holiday Monday.