Gainsborough Trinity finished the 2021/22 season with a flourish, winning away from home for only the third time this season, whilst completing a third double of the campaign with a 2-1 win, away at Whitby Town. Jovon Makama and Alex Wollerton on the mark for the Holy Blues, as Makama netted his eighth of the season to finish as joint top scorer alongside Brad Grayson. Injury and illness again wreaked havoc with Head Coach Tom Shaw’s team planning and selection ahead of the final game of the season, but his patched up side, which included Joe Wilson at left back, in place of the poorly George Hornshaw and Neal Bishop in the heart of defence (with Stefan Galinski only fit enough to be named amongst the substitutes).

Trinity were once again stretched. There was a recall to the starting eleven for Alex Wollerton too, as Jack Gibson started on the bench, alongside Prosper Keto. Shaw asking for, and getting, total commitment from every player that pulled on the shirt, as we ended the season with a win. Trinity forced the first corner of the afternoon, but were twice indebted to Alex Wollerton taking up good positions on the goal line to block shots and keep the scores level. First Wollerton hacked away from Harry Green’s effort after Green was picked out by Marcus Giles, before Adam Gell took on an ambitious effort from thirty yards that didn’t threaten the goal.

League leading marksman, Jacob Hazel then produced a moment of quality as he turned sublimely on the edge of the box, but Isaac Rice was round calmly on the cover to snuff out any threat of danger. A hurried Matt Yates clearance found it’s way to Jovon Makama. The on loan forward held the ball well, before releasing Toby Gould, the tricky winger ruffling the side netting with options square.

A good spell of Gainsborough pressure down the right cumulated in a Cieron Keane daisy cutter that Shane Bland in the Whitby goal could watch comfortably past his post. Before a short free kick and another passing move for the yellow-shirted Blues saw Wollerton deliver a cracking ball to the near post, where Makama hook 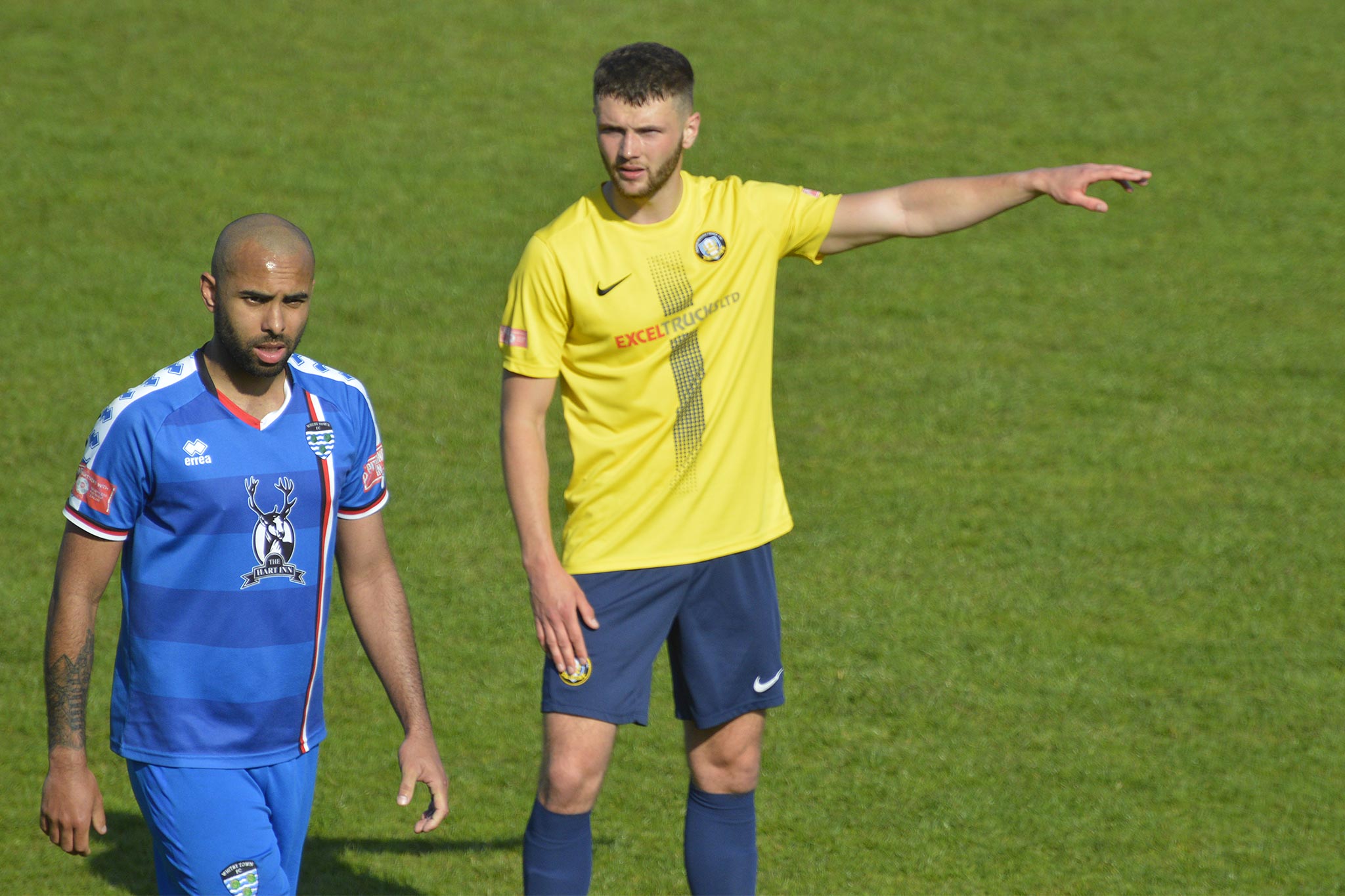 ed the ball on. Again wide, this time wide of Bland’s left hand up right, but Shaw’s men were asking questions and looking dangerous.

Rice and veteran Bishop were handling the twin threat of Hazel and Bradley Fewster well. The former doing well to shake off a knock after a high impact collision with the home side’s chief goal threat. A deep Griffthis corner was only partially headed away, finding Hazel in space at the back post, he took a touch to compose himself before arrowing a right footed effort goalwards. Wollerton in the right place to block the second on the goal line, before Hazel thrashed the rebound, left footed high and wide of the target.

Tom Cursons tried to take the fight to Whitby, and Keane tried to profit with a foraging run into the box, half cleared, the ball fell for Cursons, but his effort was neither a cross, nor a shot and Bland was able to gather.

Cursons was again involved in the action, seven minutes before half time. His cross field ball picked out Toby Gould, who brought the ball down. Wollerton picked up the running. Driving Trinity forward down the right. His ball into Makama wasn’t controlled, but good perseverance from the front man saw him win the ball back – and make the magic happen, drilling a fine low effort past the despairing dive of Shane Bland in the Whitby goal.

Trinity were determined to ensure they had the lead at half time, and on a number of occasions, yellow shirts swarmed the ball to win possession back and turn defence to attack with the strong running of Cursons and Gould. When Green was slipped in down the Trinity right, Ahui recovered well and got a telling toe on the ball as Yates came out to smother – before Bishop used all of his experience to stand his ground as Hazel tried to dart in behind. Half time: Whitby Town 0 Gainsborough Trinity 1.

Whitby came out chasing the game, and Bishop again had to be on hand to head an inswinging freekick from Griffiths behind for a corner. The Holy Blues unfortunately lost Makama to injury early in the second half, but his replacement, Jack Gibson was straight into the fray, not able to keep the ball under his close control as he broke into the box. Substitute Dijksteel looked to combine with Green and Hazel, but again the home threat was well dealt with by a determined Bishop. And when Bishop wasn’t in the right place (which in itself was rare) Isaac Rice was. Blocking a thumping Dijksteel effort before the Holy Blues cleared the danger.

The home side were back on level terms though when Green, who had been a tricky proposition down the left all afternoon, cut inside and clipped in a right footed ball. Allowed to travel across the face of goal, Hazel claimed a touch, but in truth it looked like it had gone right the way through. They weren’t to be level for long though, as calamity struck. The usually reliable Bland scuffed his clearance straight at the unexpectant Adam Gell in the middle of the park, and Trinity pounced on the ball immediately, Gibson feeding Cursons to pick out Wollerton arriving right on cue to restore the Gainsborough advantage, and enjoying the moment with the Trinity faithful gathered behind the goal.

When Sukar found Hazel, the front man looked to pick out the surging run of Giles from midfield, but a combination of Bishop and ‘keeper Yates denied the Seasiders’ progress. There was still time for Hazel to hit a quick snapshot, but his effort was off target. And in front of approximately a hundred travelling Trinity supporters, the Blues emerged victorious and climbed to a finishing position of seventeenth in the league. For a young, work in progress side, on a shoe-string budget, the foundations have been laid, for hopefully, an exciting Gainsborough Trinity future, going into our 150th year.