Gainsborough Trinity narrowly lost out I'm the latest pre-season game to Boston United. Three down at half time, a score that flattered the visitors and unfairly reflected the efforts put in by Damon Parkinson and Neal Bishop's new look charges. Gainsborough never gave up and added some respectability to the score line thanks to strikes from Andrew Wright and Tom Cursons. There was a more familiar look and feel to the starting line-up against The Pilgrims, as only two trialists were named from the start - at left back and in Central midfield.

Joint Manager Neal Bishop played his first minutes of pre-season, while Clayton Donaldson also made his first start for the Tangerine Holy Blues. Trinity started the half brightly as Jack Dyche found space in behind the right back. His early strike forcing a sprawling save from The Pilgrims' stopper. It was a watchable opening to the game, with Bishop and Donaldson both showing touches of class at opposite ends of the field. But Trinity would find themselves a goal down on nine minutes, as an unforced error gifted Pollock a sight of goal, which he duly despatched.

Shortly after going behind, Grayson's pinpoint corner was glanced wide by Bishop, up from the back, before the trialist number ten for Trinity caught a sweet effort that just faded away from the Boston right hand upright. The Holy Blues were looking dangerous as Donaldson seamlessly stitched the play together. Neat interplay between Grayson and The Don, saw the former take the ball in his stride, but forced a little wide, he couldn't get enough purchase on the strike, retreating defenders able to block - and clear the danger.

As the first half wore on, Boston enjoyed more of the play, a well worked move saw Yates goal threatened, though the 'keeper wasn't called into action on that occasion. A few minutes later he was required though, plucking a long throw into the heart of the defence, out of th 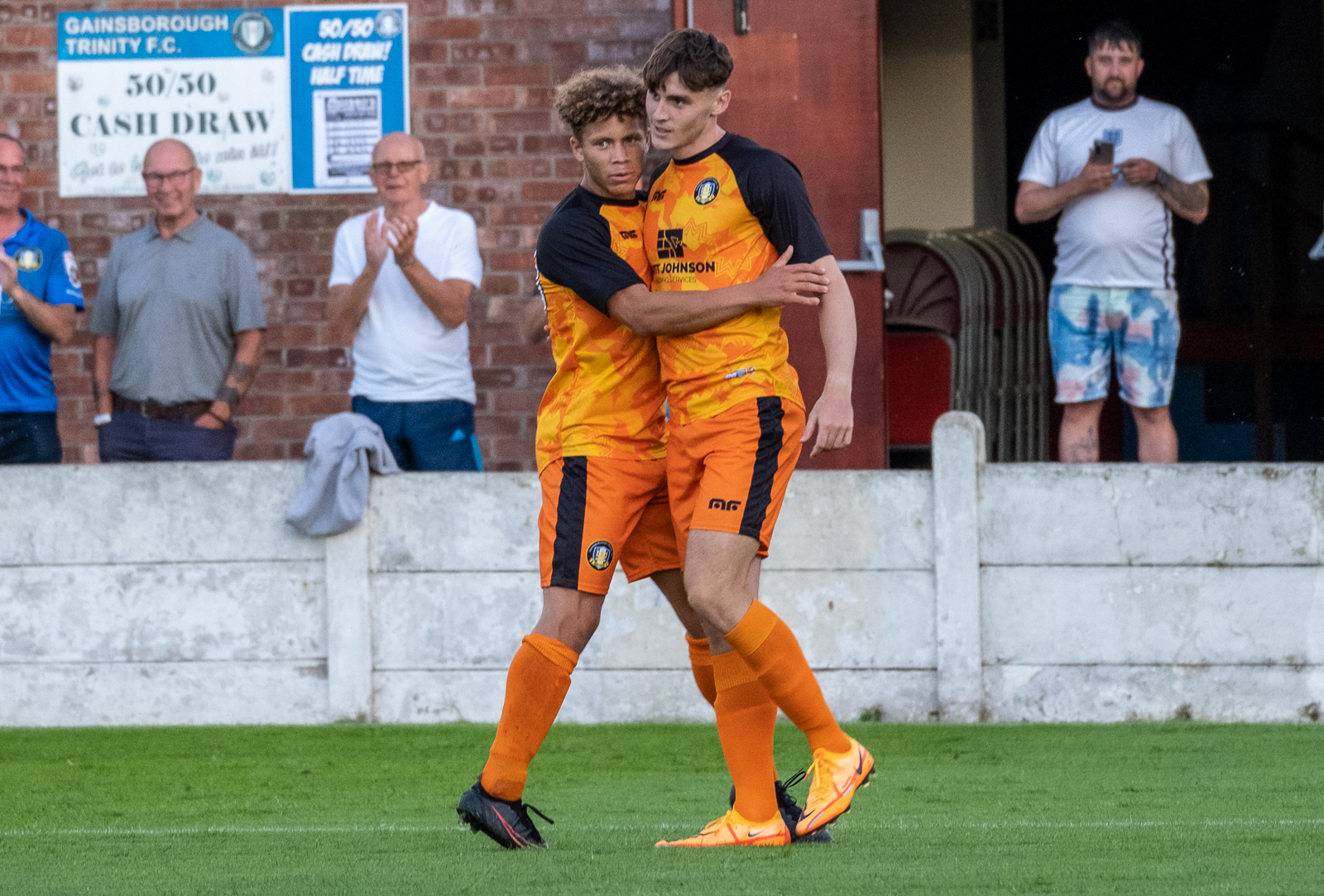 Four minutes from half time, the Holy Blues played some sublime football out from the back. With Grayson a real live wire - he felt aggrieved - when following a clever one-two, the marksman appeared to be felled within shooting range. Mr Moody, the Referee didn't agree, opting to play on.

And Trinity were punished a moment or two later, Pollock scoring his second, and third of the evening - to complete his hat-trick. The goal to seal his hat-trick seeing him flick the ball over his head, spin on a sixpence, and cooly finishing beyond Yates

A two-goal salvo, three minutes before the break sent Trinity in at the break disappointed, but the side came back out after the interval, unchanged and with something of a point to prove. Boston came out with their tails unsurprisingly up, and it took some bright Isaac Rice defending to snuff out the danger once, before an effort was scooped onto the roof of Yates' net.

Nine minutes into the second period and Trinity reduced the deficit. Wearing the captain's armband, Andrew Wright showed the attitude, effort and application required. Never giving up, he chased down the Boston goalkeeper, picking his pocket - and despite the angle and distance from goal seemingly against him, showed great composure to roll the ball home.

Two minutes after his introduction, with just under half an hour of the game to play - Tom Cursons announced his arrival. Also to add, netting his second in as many games, against the visitors! From midway inside the opposition half, Cursons strode forward and hit a fierce strike from the edge of the box - a fierce strike that stayed hit!

Gainsborough rang the changes with a number of U21s getting game time and impressing against senior opposition. Boston had one thumping effort fizz wide of the post as in the main, the Tangerines looked for an equaliser. It wasn't to come, but it was an improved second half performance, with plenty for the management to work with in the remaining weeks of pre-season.

With a break from match action, this weekend, the Trinity hopefuls will be swapping their football boots for running shoes, as preparations step up for our season curtain raiser on August 13th.