Bamber Bridge came out on top in the game between the two form sides in the league. First half strikes from Connor Stanley and Nathan Pond enough to give the visitors all three points and inflict only the second league defeat on Gainsborough, all season, despite Blues' Liam Waldock netting his tenth of the campaign. Pleased with the effectiveness of the Holy Blues in midweek, Neal Bishop named an unchanged starting line-up, and made just one solitary change amongst the substitutes, as Ethan Bojang was left out of the squad, Harry Lewis returning from illness to take his place in the sixteen.

But despite the faith shown by Bishop to name an unchanged line up, the performance produced by the young Blues couldn't have been more chalk and cheese than the midweek heroics demonstrated on the east coast on Tuesday night. Bamber Bridge found themselves one up on eleven minutes when Stanley caught Matt Yates out with a low finish from range. David Perkins won the ball back for the visitors in midfield, found Paul Dawson and he squared for Stanley to strike low, from distance.

Trinity huffed and puffed, but couldn’t find the finishing touch. A goalmouth scramble in the box, ultimately ending with Liam Waldock blazing over. Tom Cursons then broke down the right, tricked his way into the box and looked to centre for strike partner Donaldson, only to see Goddard gather on the edge of his six yard box.

Next, down the left Donaldson mesmerised the visiting defence as he ghosted past three yellow shirts- as if they weren't there, before flashing an effort across the face of goal. No blue shirt committing in an attempt to divert the ball goalwards - any touch would have no doubt yielded an equaliser.

Cursons squandered a great chance when he raced on to a defence splitting ball, but his touch let him down, allowing Goddard the chance to swipe the ball off his toe - and the opportunity - gone. On the stroke of half time, veteran Nathan Pond was 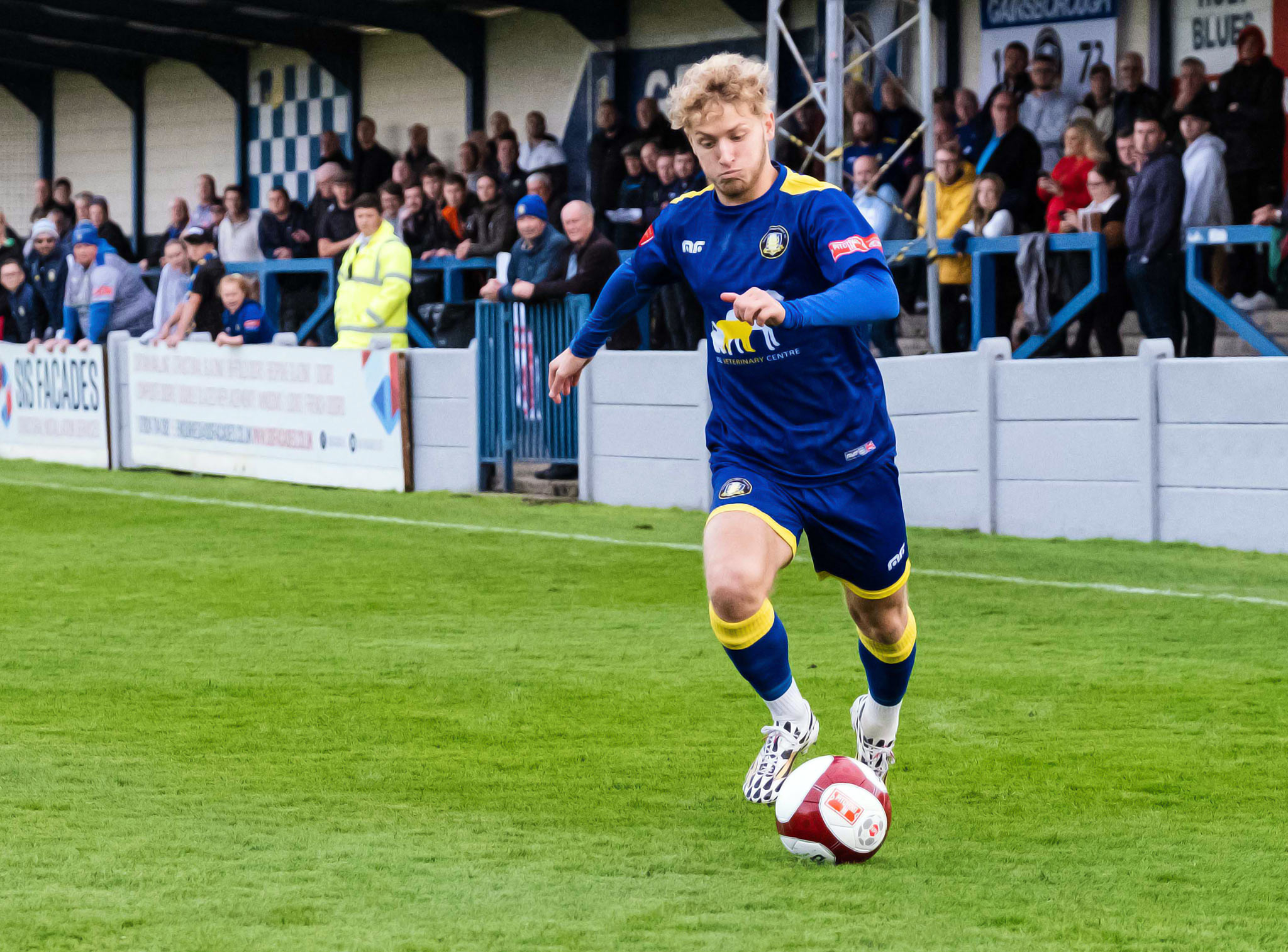 given too much time and space, and he spun to fire past Yates and double the visitors’ advantage.

Gainsborough made a double change at the break, with Prosper Keto and Jack Dyche introduced, as Bishop and Stamp changed shape and personnel in the search of a way back into the game. Immediately the Blues looked better with Keto looking a threat down the right, with his aggression and strong running. Winning a corner, which Durose centred. Cann shot goalwards, but his effort comfortable for Goddard.

Dyche, again looking lively on as substitute and won another corner. From the set piece Donaldson got across his man but his header looped over the bar from an acute angle. Trinity had certainly started the second half better and appeared to have a little more fight, that seemed missing in the first half malaise.

Despite Keto's advances down the right posing questions, it was from the other flank where Trinity got their goal back. A cross from Joseph West was magically flicked back by Clayton Donaldson into the path of Waldock to smash past Felix Goddard in goal for Bamber Bridge. Would Waldock's tenth of the campaign be enough to spark the second half revival?

With half an hour to play, 'keeper Goddard was warned as to his time wasting by Match Referee Samuel Clayton, but that wouldn't deter the number one taking as much time as he could get away with - and a little more. Patient build up for the Blues, eventually found Donaldson on the left. As he cut in towards goal, he teed up Shrimpton and the on loan Scunthorpe midfielder stung the palms of Goddard with a speculative twenty yard strike.

Despite dominating the majority of possession for the remainder of the game, Bamber professionally ran down the clock to secure all three points. A flurry of yellow cards as Mr Clayton lost patience with the the time management tactics employed, preventing the game from flowing. Even with the introduction of tricky wide man, Harry Lewis, the Holy Blues didn't have the tools in the armoury to pierce a stubborn Bamber Bridge side, that were very effective throughout. A well drilled side, that the Holy Blues will need to find a way of getting the better of, if we are to have as successful a season as the one, that has so far been hinted at.

Owing to the relentless nature of the Pitching In Northern Premier League, there's only three days before the lads get the opportunity to put things right, when we entertain Morpeth Town on Tuesday evening, at the Dave Longstaff Martin and Co Arena. The boys need you there - in numbers - to roar them on. Let's do this!