The Holy Blues dominated for ninety minutes against a Morpeth Town side averaging a point a game away from home, but the ten man Highwaymen snatched an equaliser with their only attempt, eight minutes after being reduced to ten men and two minutes after going behind. The latter two factors compounding further the Holy Blues' home disappointment. Neal Bishop made two changes to the side that suffered only a second league defeat of the season, but resisted the temptation to hand a first start at full back to the returning Prosper Keto. Instead, George Hornshaw was favoured at full back, Jack Dyche replaced Callum Minkley as Trinity changed shape. And Bishop's braveness was rewarded with a vastly improved performance, if not the result to match.

The Holy Blues started on the front foot, and the reintroduced Dyche was quickly involved. Liam Waldock and Clayton Donaldson combined to release the former Hyde United man, but his effort lacked the power to trouble Dan Lowson between the sticks for Morpeth. Trinity were pressing and counter pressing to good effect. Waldock and Donaldson were again involved, with Hornshaw whipping a cross in from the right. Dyche joining from the left hand side almost profited from a double ricochet off Morpeth skipper Jeff Henderson and his central defensive partner Callum Morris, but twice from close range he was denied by Lowson.

The Holy Blues built from the back, Matt Yates taking 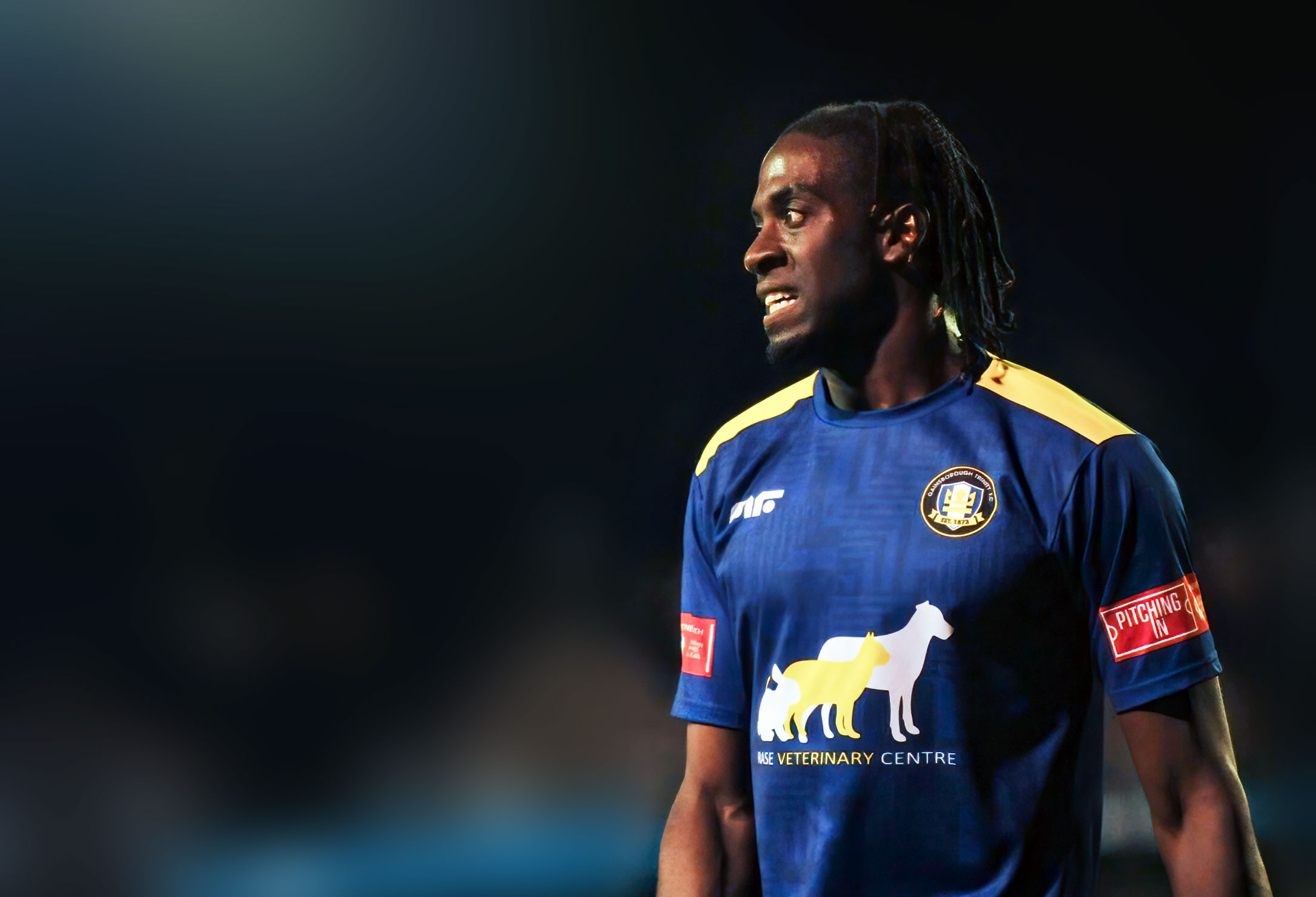 the freekick short, centre back Dylan Cogill found the feet of Donaldson, before Waldock then released birthday boy Curtis Durose inside the area, but as the angle became more acute, Lowson was again comfortable as he fielded to his right. Donaldson then fashioned something out of nothing as he demonstrated great skill to get him into the box, but the end product was just missing. Lowson not tested this time!

Gainsborough were playing the better football and were, looking dangerous and asking questions of the visitors. And it wouldn't be long before Donaldson had the Whites of the goal in his sight. Racing through onto W

aldock's defence splitting pass, the veteran front man looked to dink the ball over the advancing goalkeeper, but was unable to get enough purchase on the attempt.

Trinity were having to work hard to break Morpeth down, but were showing the ability to do that, but without the all-important finishing touches. Waldock unlocked the Highwaymen's back line as he played in Durose. But again Lowson was equal to effort, this time pushing the Rotherham loanees effort into the side netting.

It was an entertaining half for the Holy Blues, who's biggest complaint would not being ahead at the interval. With the bulk of the play, and certainly the better of the chances, Bishop's Blues deserved more than the scoreline suggested, as the deadlock remained unbroken.

Gainsborough had to be wary of the Morpeth threat. Despite not testing Yates with a direct shot on target in the opening period. The longer it went on- goal-less, the more you worried about a quick counter to make the Blues pay for their prologency.in front of goal. Andrew Wright was sitting deep and looking to make the Holy Blues tick. He seemed to be enjoying the midfield battle up against Liam Noble. Skipper Wright strong in the tackle and upsetting the Morpeth man, as always seemed to be in his shadow.

Shrimpton and Durose combined, but Curtis was unable to find a blue shirt, with Donaldson taking time to get back to his feet after a coming together in the box. Jeff Henderson then needed treatment before Wright's ball into the box was punched away by Lowson. Durose recycling the ball found Hayden Cann two or three yards out - but he couldn’t make it count!

George Hornshaw and Chris Reid, the Morpeth left back, contested a 50/50 in the middle of the park. Hornshaw getting to the ball first (by a millisecond) and Reid, also fully committed, ended up going over the top of the ball. With that, Morpeth were reduced to ten men, but Gainsborough lost Hornshaw who was in no way fit to resume. George immediately replaced by Prosper Keto for the final 26 minutes.Soon into the action, Keto tried to deliver from the right. His cross only cleared as far as Shrimpton. And the Iron midfielder found goalscoring Waldock, but he flashed his effort wide of the near post, when in a good area.

Durose again provided the ammunition for Waldock, this time denied by the 'keeper as Lowson beat the ball away. The Blues finally had the goal their improved performance warranted. But it was down to the supreme improvisation of leading marksman Donaldson. Durose needed two bites at the cherry, but his second ball into the box found Donaldson and his superbly improvised back heel flick diverted the ball beyond the impressive Lowson.

Morpeth down to ten men, a goal down and the Holy Blues creating opportunities at will. This game should only have gone one way. But Trinity would be undone. A trio of errors gifted Morpeth, who in truth had offered nothing of an attacking threat, the opportunity to put the ball in the box. Noble found his captain Henderson, and his header back across goal gave Connor Thomson the simplest finish from close range. With their solitary shot on target, Morpeth were back on level terms. And only two minutes after going behind.

A driving run from Keto saw Morpeth scorer Thomson yellow carded for a foul on the raiding right back, just before he was about to enter the penalty area at pace. Durose's free kick a let-down as it was floated onto the roof of the net, with the big men in from the back. Bishop threw on fresh legs as he swapped Dyche for Harry Lewis. And the Blues looked to crank up the pressure on the visitor's, winning a number of corners as the Highwaymen defended the frame of the goal, like their lives depended on it!

And as time ticked down, the Blues found themselves more and more frustrated. Playing on the counter, the ten men won a succession of set pieces to wind down time, but Trinity still had one final attack, as the Blues turned defence to attack, but Harry Lewis' cross on the run floated harmlessly over the bar - and Gainsborough had to settle for a share of the spoils.

Only one point from six available in the two most recent home games, but testament to the tightness of the league, Bishop's Blues move up to 11th in the table. It's the FA Trophy next, as we shift our focus on a trip to the Giant Axe to take on Lancaster City.