In front of a bumper gate at the Dave Longstaff Martin and Co Arena, Gainsborough Trinity came back from two goals down, to draw with Radcliffe, thanks to goals from Liam Waldock and Clayton Donaldson. The fightback ensuring the Holy Blues completed their November unbeaten, and on top of the Pitching In Northern Premier League (with today’s visitors hosting South Shields on Wednesday night).

Trinity boss Neal Bishop showed faith in the side he named away at FC United of Manchester last weekend. The side that rose to the top of the table, but in the opening half hour, his young Blues failed to reach the heights the boss demands. A shaky opening ten minutes, saw Radcliffe settle the quicker of the teams. And the Holy Blues had already had a shot across the bow when Boro Player/ Boss Robert Grant opened the scoring on seven minutes.

When Hayden Cann misplaced a pass, following a hurried couple of Gainsborough passes, Grant was onto the ball in a heartbeat, lifting a superb effort over the stranded Matt Yates to put Radcliffe ahead from fully 40 yards. Curtis Durose’s right wing corner, was then turned goalwards through a crowded penalty area, by Dylan Cogill – but straight at the visitors’ goalkeeper. From six yards out – either side and Thomas Stewart would have been in trouble!

The Holy Blues were struggling to get a real foot hold in the game, as the experienced visitors marshalled the threat of Donaldson up top, and despite a lot of possession at the back, when looking forward the Blues went direct, too quickly. The full backs nullifying the threat of Curtis Durose and Harry Lewis. Starved of any real service, the wide players cut a frustrated pair.

Matt Yates was out quickly to save at the feet of Jake Thompson, making himsel 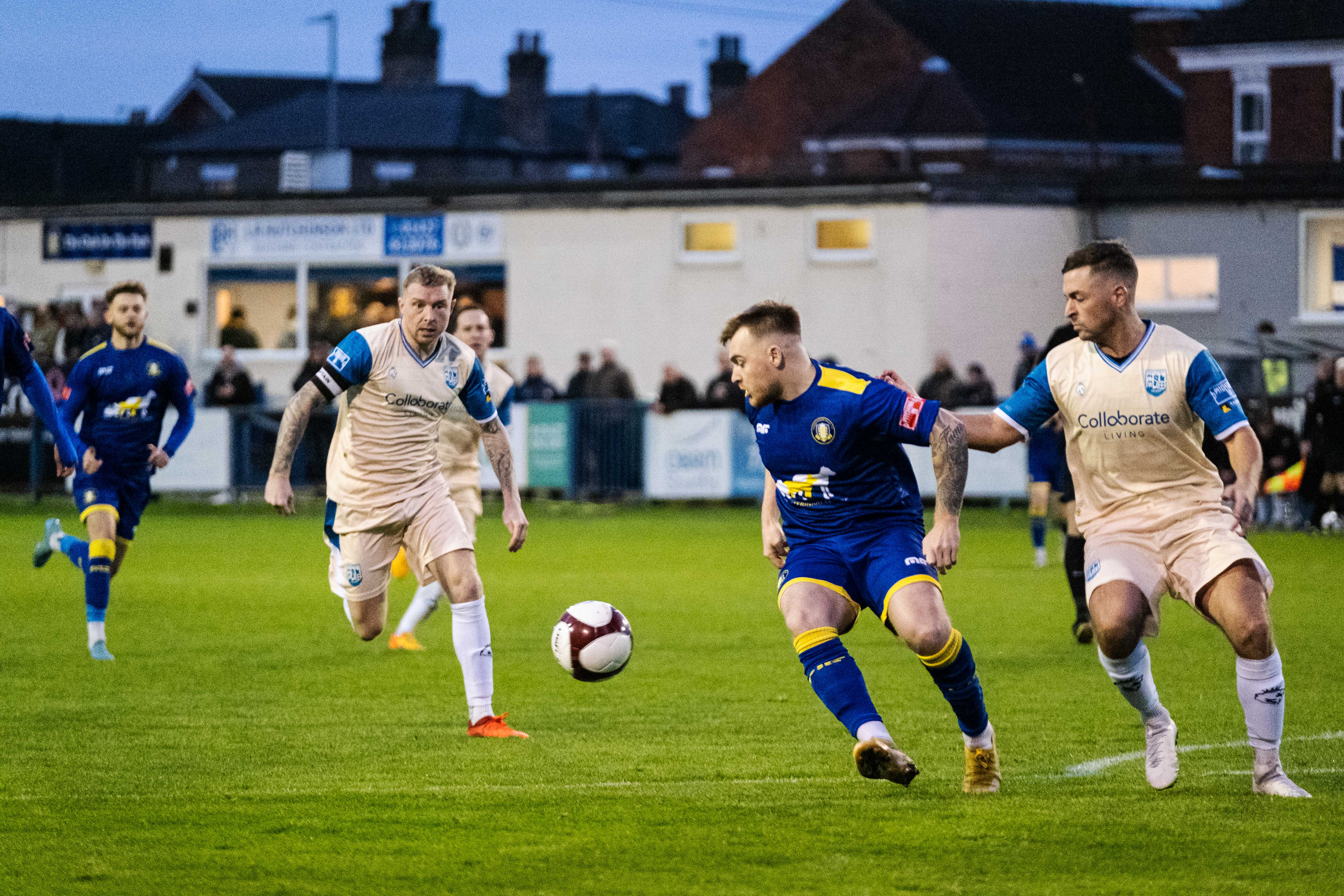 f big, he helped the ball onto the bar and behind for a corner, after the Blues had been cut open too easily Things looked like they had gone from bad to worse, when Durose was adjudged to have fouled Radcliffe livewire Jude Oyibo, the visitors #11 seemed to initiate contact, but Referee Mr Wilson was quick to point to the spot. Oybio quickly took responsibility, but saw his overconfident spot-kick saved by Yates, who stood up well to block.

That save, and subsequent bravery to block on the follow up – and subsequent treatment - seemed to spark something of a response from Trinity, who finally began to roar into life. From defence to attack, Harry Lewis carried the fight forward for the Holy Blues. Cutting in from the right, onto his left foot, he struck his effort well, and Stewart had everything behind it to parry, it didn’t look convincing from the ‘Boro number one, but up until that point, Trinity hadn’t done enough to test the visiting goalkeeper.

Lewis then struck the post with another dancing run, this time from the left. Fin Shrimpton saw the fleet of foot wide man in space on the left, and found the winger, who got at his full back, before rasping his right footed effort off the foot of the post. The ball rebounding to Durose, who was unable to adjust his feet in time to keep his effort down – improved from the Holy Blues as half time approached.

At the end of five first half minutes of stoppage time, Gareth Evans won a freekick to the left of centre, and Nicky Adams clipped the bar with his right-footed strike, up and over the wall, but not dipping enough for anyone of a Radcliffe persuasion. And the Holy Blues went in at the break only a goal behind - and certainly 'in the game'.

Neal Bishop made a double change at the break, as a reshuffle saw George Hornshaw on at full back, Hayden Cann moved to centre back, in place of Collins. While Isaac Rice was replaced by Fraser Preston, with Durose playing more centrally & Preston playing from the right. And it was a reshuffle that saw the Holy Blues much improved after the break.

Trinity responded and were much the better side in the second half. Donaldson was receiving better service, seeing an effort blocked, before he drew a brilliant save from Stewart, Preston and Waldock combined to release Donaldson, but as he opened his body to shoot towards the top right hand corner, Stewart flung himself away to his left, to maintain the Radcliffe lead.

And moments later, Oyibo doubled the visitors’ lead. Flicked on by Grant, the ball ricocheted kindly into the former Spenymoor man’s path, and he made no mistake sliding past Yates.

Undeterred, Trinity’s response following the first half penalty save, had been massively positive – and Bishop demanded more of the same from his side, and inside sixty seconds, were back to trailing by just the one goal. Two former Sheffield Wednesday youngsters combined, as Fraser Preston came in from the right, sliding the ball into the path of Liam Waldock, who made no mistake, slotting low past Stewart’s outstretched left arm, to notch his thirteenth of the season – game on, again!

Donaldson then slid agonisingly wide of the far post after Shrimpton’s cross appeared to strike an arm. Referee Wilson unmoved, despite the unnatural position of the arm. Cann got in round the back on a couple of occasions, just failing to hit the target with a side foot volley and heading wide when seemingly well placed. Trinity were knocking, and Radcliffe were having to defend deeper and deeper. And desperate defending, saw Donaldson on the end of some rough house treatment. Requiring prolonged treatment following one hefty challenge, in which Rick Smith was yellow carded – Preston got the ball up and over the wall – but saw his effort comfortably held by Stewart.

Donaldson was to have the last laugh though, when three minutes from time, he looked to get on the end of Lewis’ clipped ball over the top. Off limits, Stewart was forced to clear, but the veteran front man was in the right place as his clearance struck the front man and rolled into the back of the net to draw the score level.

With seven minutes added time at the end of the game, there only looked like being one winner. But it just wouldn’t fall for the Holy Blues – the best of the opportunities when Shrimpton released Durose down the right, but a last ditch block saw the ball turned behind for a late corner – the on loan Rotherham man seemingly having picked out a colleague six yards from goal. In the end, Trinity had to be settle for a point, in what was an entertaining advert for Northern Premier League football. The Blues had given themselves a mountain to climb having fallen two goals behind, but an improved second half performance demonstrated a never say die attitude, and while South Shields were dropping points against Warrington Town, it was vital that Gainsborough took something from this afternoon’s game.

Next on the agenda for Neal Bishop & Darryn Stamp’s side is an away game at Hyde United, who currently occupy third place in the Pitching In Northern Premier League. Two points behind – and with a game in hand. It’s certainly still tight at the top… but for now, the Holy Blues remain top of the pile!