All good things have to come to an end. And the Holy Blues’ fine run of form on the road finally came to an end with a disappointing showing at Hyde United’s Project Solar Ground at Ewan Fields. The leagues’ leading scorers drawing a rare blank, in a game in which they went behind early – and never really looked like recovering to take something from the game. The home side leapfrogging Neal Bishop’s Holy Blues, as league leaders’ South Shields let a two-goal lead slip, to drop two points at home to Ashton United.

The Holy Blues were without the suspended Dylan Cogill at centre back, with boss, Bishop shifting Isaac Rice to centre half, giving the former Owls’ youngster the armband, alongside Hayden Cann. George Hornshaw came in for his first start in over a month at right back, while Fraser Preston was handed a full debut on the right of midfield.

Trinity started the game shakily, and like last weekend against Radcliffe, found themselves a goal down on seven minutes, in an equally avoidable manner. A soft free-kick was given away on halfway, and Liam Tongue hoisted the ball up to the edge of the Blues’ penalty area. Home skipper Brad Roscoe won the first ball easily to nod the ball down, and despite belatedly being hauled down, referee Elliot Bell allowed play to develop, with Sonny Whittingham slotting home unopposed. Too easy for Hyde, and easily preventable, giving the visitors a mountain to climb.

So often this season, the Holy Blues have been able to dig in, and show great resolve, to fight, but the rally didn’t really come. Despite being allowed lots of the ball across the back line, as an attacking entity, Trinity never really got going. Too often, the visitors were unable to string a sequence of purposeful passes together, going forwards. And it was the Tigers who looked more threatening. Almost sitting back and playing the game on the counterattack. 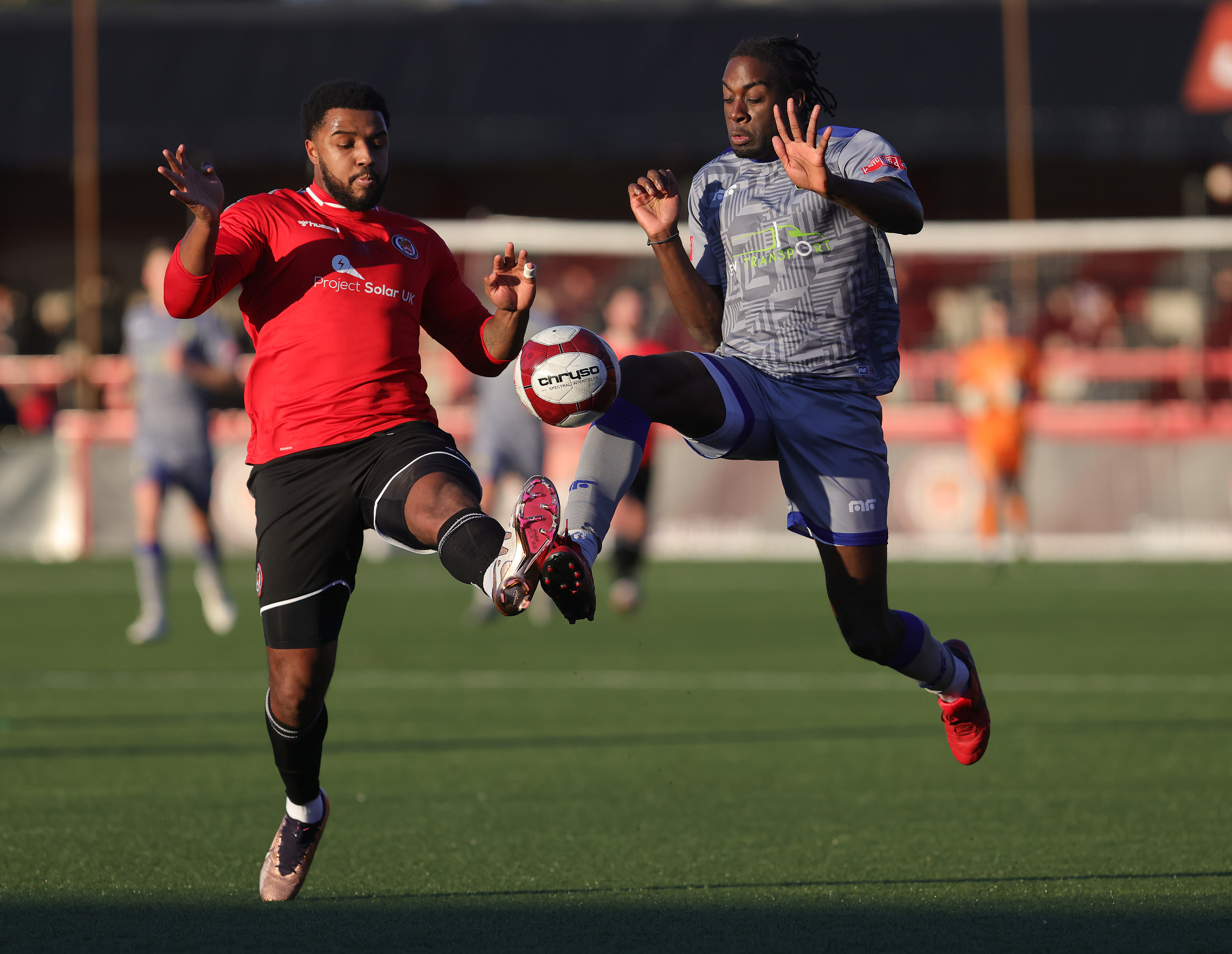 Almost like they were the away team, inviting Trinity to come onto them, before attacking quickly on the counter.

Tom Pratt flashed a cross-shot across the six yard box after he got in down the right-hand side, no Hyde attacker up in support, before Jack Redshaw, a torment on the left hand side, went close to doubling the hosts’ advantage when he came inside onto his right foot. Feinting to shoot not once, not twice, before on the third, he struck the underside of the crossbar. Pratt flagged for offside, as he tried to put in the loose ball. It was a let off for the visitors, who nearly found themselves two behind.

Redshaw again went close, this time when he got on the end of a Mampala cross from the right, but the diminutive forward just wasn’t tall enough to keep his header down as he was given the freedom of the Trinity penalty area.

Clayton Donaldson was being forced to drop deeper and deeper in search of the ball, as Trinity couldn’t get Harry Lewis and Curtis Durose on the ball as much as they would have liked – and Preston – though a willing outlet – found himself starved of the ball and the hosts made life difficult with two solid banks of four.

The closest Trinity coming during the opening period, was when Donaldson flashed an effort narrowly over the angle of post and bar from the right side of the area. Preston showing that if he gets on the ball, he has the ability to unlock a defence.

The second half saw more of Trinity with the ball, though again really struggling to penetrate a mean defence, well marshalled by Jordan Fagbola. Dan Atherton in the home goal a virtual spectator, as Neal Bishop’s charges struggled to muster a shot on target.

In truth, it was the home side that looked more dangerous, as they picked their moment to go forward, Hornshaw recovering well to throw Redshaw off his stride, as the Tigers threatened coming forwards. Eddie Brown helping the ball on to the former Ashton United attacker, but the Blues’ right back doing just enough.

Jack Dyche was thrown into the fray, against his former club replacing Preston just before the hour mark, and the busy front runner was soon amongst the action. Adjudged to have fouled ‘keeper Atherton after Durose had seen his effort charged down. The ball looping up into the air, Dyche and Atherton colliding in mid-air.

Donaldson then did well to initially find a pocket of space, and collected Joseph West’s ball into feet, but could only win a corner as he tried to twist and turn. The supporting cast unable to get up in support of the front man, who was looking for a lay off to the midfield runners.

As the game edged towards full time, the hosts were never really troubled – and Trinity frustrations were clear to see, when Dyche picked up a booking following a skirmish in the Hyde penalty area. The substitute picking up a booking for his troubles. It just wasn’t to be for the travelling Trinity faithful, who have been treated to some fine performances on the road this season. Today wasn’t one of them, but now the boys need to regroup – and come back stronger.

Sometimes, you learn more from losing a game. Now is the time to see, just how much this group can take from our first defeat on the road in the Pitching In Northern Premier League. It’s not until Boxing Day, when we travel to Liversedge, that we will see how much our confidence away from home is affected… But before that, we are at home to Warrington Rylands (next Saturday) before the current league leaders visit on December 17th. Two big home games, to finish 2022 off on a high, at the Dave Longstaff Martin and Co Arena.

Let’s turn out in force, paint the town blue – and set ourselves up in style, for an exciting 2023 – and all that entails!