Gainsborough Trinity got the second half of the season off to a flier, winning by 3-0 goals to nil in front of a bumper crowd at the Dave Longstaff Martin and Co Arena. Maintaining the pressure on the sides above the Holy Blues in the Pitching In Northern Premier League, Neal Bishop’s young Blues brushed past Matlock Town, opening up a four point gap on sixth placed Marine, certainly ringing in the new year in style.

Having been faced by a thirty day plus lay-off, Bish made three changes to the side that lost by a single goal to Hyde, back at the start of December. Dylan Cogill was back at the heart of the defence, alongside Hayden Cann. While there were debuts in the middle of the park for Bailey Conway and Charlie Carter following the return of Harry Lewis and Finlay Shrimpton to their parent club, Scunthorpe United. Cody Collins also having returned following the completion of his loan spell, to Mansfield Town. There was a more conventional number on the back of Fraser Preston too, with the number eleven on his back, he looked more the winger than in the six shirt, he wore away at Hyde.

Trinity started the game brightly with Joe West. Liam Waldock and Preston all combining to good effect down the left hand side. In the opening couple of minutes, the former Boston and Alfreton winger found Curtis Durose, but his stabbed effort lacked any real power, and Clayton Donaldson couldn’t apply the finishing touch. James Pollard clutching the ball gratefully, despite the early scare.

Playing well with his back to goal, Donaldson drew a foul in a dangerous position. Preston delivered well into the dangerzone, but it was headed away. Returned in, Pollard punched unconvincingly, before Waldock recovered possession and found Conway, who swung a ball in deep towards the back 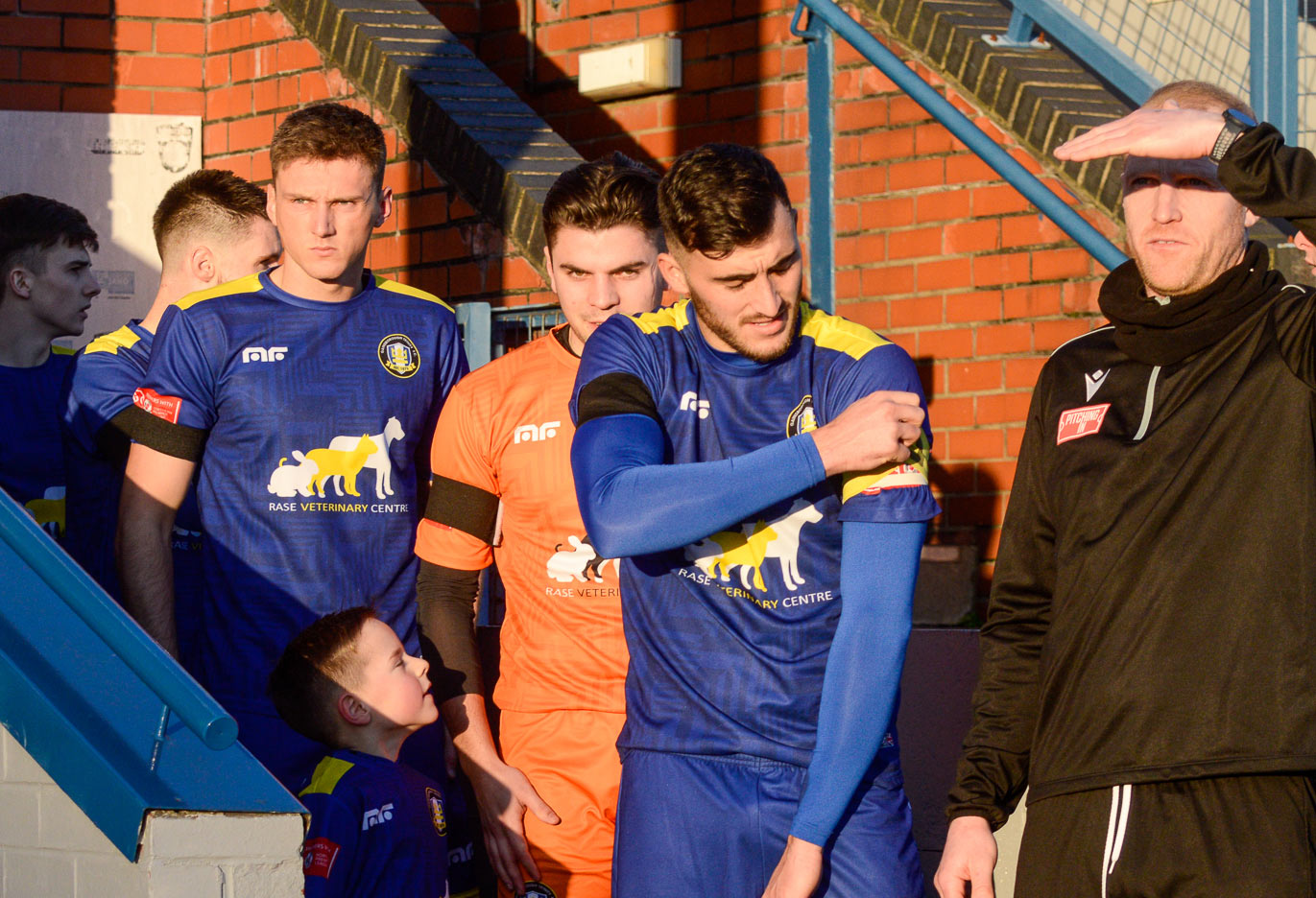 post. The cross shot striking the cross bar as Pollard back-pedalled. The visiting ‘keeper was having a nervy opening, whereas at the other end, Yates was settled and reading the ball well, a rushed clearance at one end, while Trinity’s number one was watchful and able to see the ball back into his area.

Donaldson gave chase to a ball over the top, which the Matlock ‘keeper scampered out of his area to reach, rather than clearing first time, he ran the ball out of play. Preventing Donaldson from taking a quick throw in, as he retreated with the ball. Referee Jones cautioned the goalkeeper. Centre back Cann then swivelled and hit on the turn, an effort that flashed past the angle of post and bar.

Driving forward, Durose again combined with Waldock, Preston and West. The trio combining to fashion a shooting opportunity for Waldock, who saw his effort deflected behind. Before Donaldson fired over following good play from Conway. Youngster, Conway was growing into the game, as he first helped out Cann defensively, picking the pocket of Eddie Clarke, before driving forwards. Encouraged to shoot, he dragged his shot wide.

Abbott in the middle of the park was struggling, and visiting boss Martin Carruthers had his substitution prepared, but with a Gainsborough corner, the ex Premier League forward opted to wait for the set piece to be taken. The Holy Blues capitalised, as they sought the breakthrough. And it came on the half hour mark, when a cross from Durose was headed back across the face of goal, and corner taker, Durose arrived unmarked to slot past Pollard, inside his near post - to the joy of the large home backing. In the immediate aftermath, Milovanovic replaced Abbott.

Church looked to drag Matlock back into the game immediately, but following a foul on Cann, the Trinity centre half needed to leave the pitch for a minute or so – but that wasn’t to deter the Blues, who found the willing run of Preston with a ball over the top, first to the ball, the winger looked to work an effort goalwards, with Pollard rushing out, the ‘keeper made himself big, handling outside the area in the process. Referee Jones with no alternative than to brandish a straight red card. Preston’s effort looking like it was on it’s way in, despite the angle being against the former Sheffield Wednesday youngster. Reduced to ten, pantomime villain, and former Trinity man, Alex Byrne donned the gloves in the absence of a substitute goalkeeper, amongst the subs for the Gladiators.

Byrne was well protected as Conway was looking to make the Blues tick in the middle of the park. Good interplay between West and Durose saw Preston with a shooting opportunity, but a combination of Qualter and Evans blocked the effort. Matlock looked dangerous from set pieces, with the Blues fortunate to see the offside flag raised, when Jordan Barnett’s pinpoint cross was met by a free header eight yards out. Slew then threw himself to the ground, to win his side a free kick, but Trinity defended that set piece better, before Milovanovic cleared the roof of the Stuart Horsley stand.

Three minutes of added time were navigated by Trinity, despite the visitors having a corner in stoppage time, and Slew seeing half a sight of goal, but Yates was down at his near post to gather, comfortably. Half time: Gainsborough Trinity 1 Matlock Town 0.

The Holy Blues, with the man advantage, started the second half slowly, edging their way into the half. Donaldson found Carter, who looked to test Byrne – but flashed his effort wide of the near post.

A crucial four minute spell, nine minutes into the second half. As the Blues switched off momentarily, Alex Duhameau was able to bear down on goal, only to be denied by a fantastic save from Yates, to preserve his clean sheet. That save was to prove crucial, before moments later the former Derby County youngster made up his mind to come and claim Barnett’s free kick, and only 58, Liam Waldock curled home number fourteen of the season, handing the Holy Blues the crucial second goal, and kill off any thoughts the Gladiators may have had of staging a fight back.

A sumptuous, curling right foot finish, that left Byrne rooted to the spot. Waldock initially doing well to win the ball back, he exchanged passes with Preston, before opening up his body to curl home beautifully.

A fantastic piece of skill saw Preston evade the challenge of Yates, and looking to deliver a ball for Durose, was only denied the pinpoint assist, by a stretching header from Evans, diverting the ball from Curtis’ path. Hornshaw and Durose then worked an opening down the right, only to see Donaldson denied from point blank range. Byrne somehow in the right place at the right time to make the save.

As Rice replaced Waldock, Conway was given licence to play further forward, and he showed good composure on the ball, as he looked to provide the ammunition for the front line, winning a couple of corners with his direct running. Prosper Keto replaced Hornshaw, and the popular full back was immediately into the action. A flash point towards the end seeing Keto and Barnett carded, as the two players had to be separated. Barnett tried his luck with an ambitious effort, looking to catch Yates off his line, the former Yeovil left pegger hit the target, but it was a routine save for the Trinity shot-stopper.

Into four minutes of added time, the Blues seemed happy to knock the ball about, only for Keto to have other thoughts as he tricked his way into the box. Doing the hard part well, he shot tamely at Byrne. The outfielder blocking, but not holding the effort, seemed to recover well as Keto looked to make a better connection. But a seemingly petulant kick out, saw the Assistant on the Club on the Park side, flag for penalty, and with the final kick of the game – Clayton Donaldson stepped up to score. Firing unerringly past Byrne to make it three goals – and three points. And a Happy New Year to all of a Trinity persuasion!

Next up sees the Holy Blues on the road, making the trip to Stafford Rangers on Saturday. With this side and your backing, anything is possible, so let’s travel in numbers and back Bish and the boys!