Following Tuesday afternoon's disappointing news that the game later that day, away at Nantwich Town, had again been postponed, this time due to a pre-existing floodlight issue, the Holy Blues have now turned attentions to Saturday's clash with FC United of Manchester at Broadhurst Park, 3pm kick off. In fine form, Trinity look set to travel in good numbers, in the search of a ninth game unbeaten in all competitions.

The encounter pits thirteenth vs fourteenth in the PitchingIn Northern Premier League with the sides locked together on twenty points from 16 games, only separated by The Rebels' superior goal difference. Trinity's 8 goal difference is trumped by FCUM's positive 2 affording the Manchester based side the higher place ahead of the game. Thirteen of United's 20 points have come on home turf with four wins and a draw, tempered by three defeats in their eight home games so far. On the contrary, the Holy Blues away form has seen Trinity yield only four points from seven away games, though the indication that the tide is turning can been since with four points from the last two, a sign for optimism. Two of FC United's defeats came in October. Following up a 6-0, Tuesday night thrashing of Scarborough Athletic, defeats to Grantham and Nantwich came without scoring. So much so, they've only found the net four times in six league matches since the Boro mauling.

Results have been mixed for Trinity against The Rebels. Goals from Simon Russell and on loan Doncaster Rovers Paul McKay gave Trinity victory back in November 2015. In 2017, the Holy Blues travelled to Broadhurst Park and again took an early lead, that time through Chris Salt on nine minutes. On that occasion Trinity went on to lose 5-1, but we retained our Conference North status with the Fylde versus Worcester r 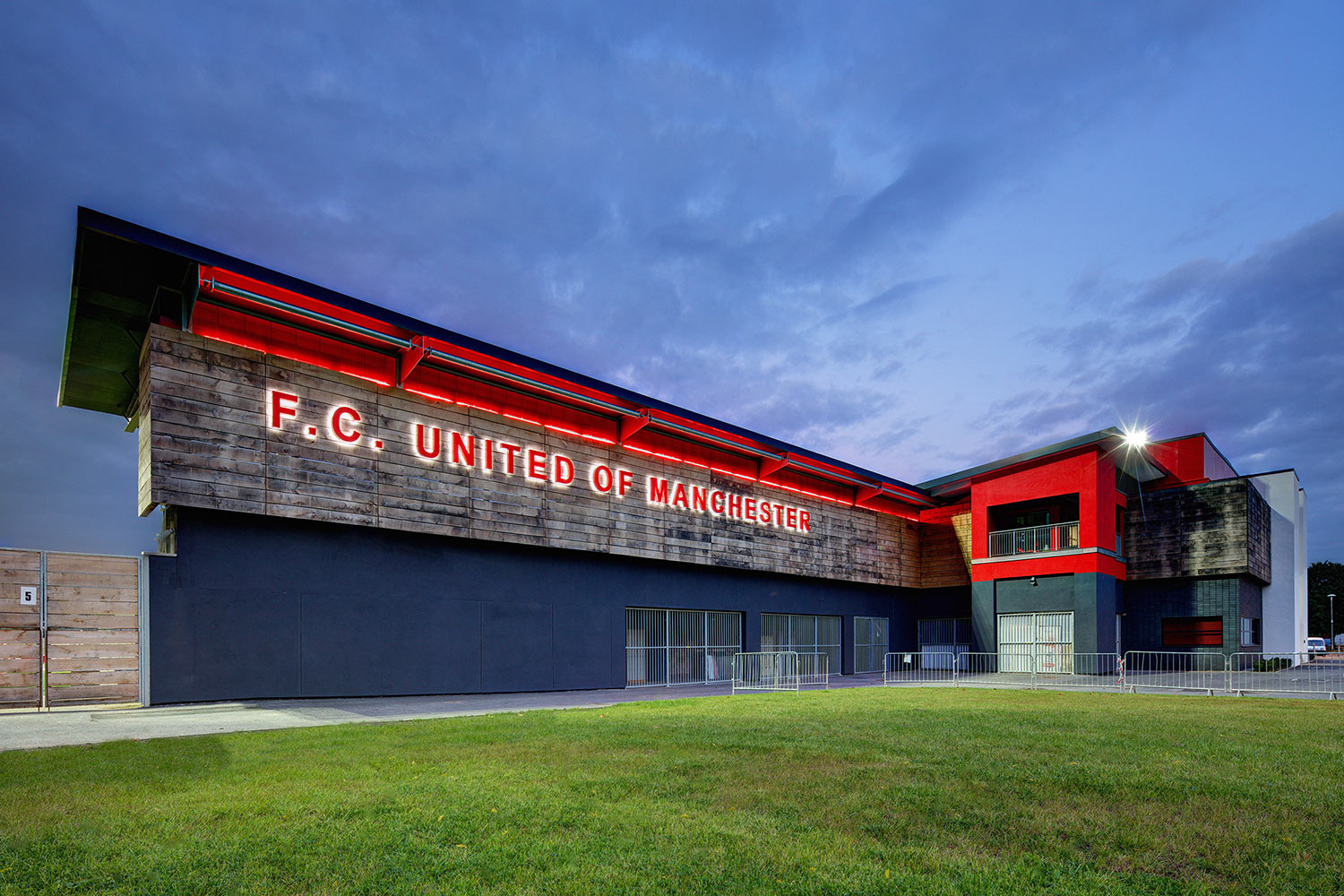 esult going in our favour. After a couple of years break, the two sides met again in Curtis Woodhouse's first league game in charge. A 2-2 draw is how it finished, with Ross Hannah netting seconds after coming on as a first half substitute, Gavin Allot having opened the scoring midway through the first half, in front of 1614. Managed by ex Bamber Bridge boss, Neil Reynolds, FC United of Manchester are a fans owned club and attract an average attendance of 1684, the second highest in the division behind South Shields.

The crowds the hosts regularly attract is something Holy Blues Head Coach Tom Shaw hopes will inspire his young side, "We were disappointed that we didn’t get the chance to test ourselves at Nantwich on Tuesday, but we have used the week wisely and the players trained superbly on Thursday evening which has given us some really tough decisions to make going into Saturdays game."

"The fitness of the group and the clean bill of health, which Jono our physio (Jonathan Whitehorne) has worked hard to achieve, gives us the selection problems we have been desperate for since the start the season."

Our excellent run of form is something that we are proud of and it’s taken us to the edge at times physically and mentally, so we will be doing everything in our power to protect our unbeaten run, our clean sheet and we will be looking to continue to improve our attacking threats within our game model and style."

"In our last fixture in the FA Trophy, I thought we had huge control of the game and that is something we will be fighting really hard to replicate on Saturday. We will graft and compete to frustrate our opposition and their crowd. We know it will be tough and we will need to show huge humility and a high level of performance to come away with a positive result, but we feel really confident as a group in the progress and improvements we are making. As always we will fight for the fans that travel and the fans at home and hopefully do everybody proud."

FC United play home matches at Broadhurst Park in Moston, north Manchester. Admission prices for the 2021/22 season are £12 for adults, £7 for over 60’s, those in receipt of Income Support or Universal Credit, or Students with a valid NUS card, £3 for under 18s and under 5’s free with a paying adult. Any person applying for a concession may be asked to produce identification at the turnstile. If a supporter is unwaged and does not have proof of any of the above they must contact the office prior to a game. The policy for disabled supporters is the disabled person pays and the carer receives free admission. Turnstiles open at 1pm.

Fire up the satnav and head for 310 Lightbowne Road, Moston, Manchester, M40 0FJ. We look forward to seeing as many of the Trinity faithful making the journey!