Following our final home game of the season, we recognised the efforts of our players throughout a difficult season with the presentation of five trophies. Scooping three of those awards was goalkeeper Matt Yates, who had to overcome a horrendous injury away at Basford United early in the season, returning to the bench in October, when we played Atherton Collieries, he was back in the side away at FC United of Manchester.

Going on to play every remaining minute, Yates kept a number of clean sheets, made countless important saves, proving himself to be a popular member of the squad and a consistent presence between the sticks, making him a favourite with supporters. In 36 appearances he kept six clean sheets, saving three penalties. Having had time to reflect on his recognition, Yates revealed, 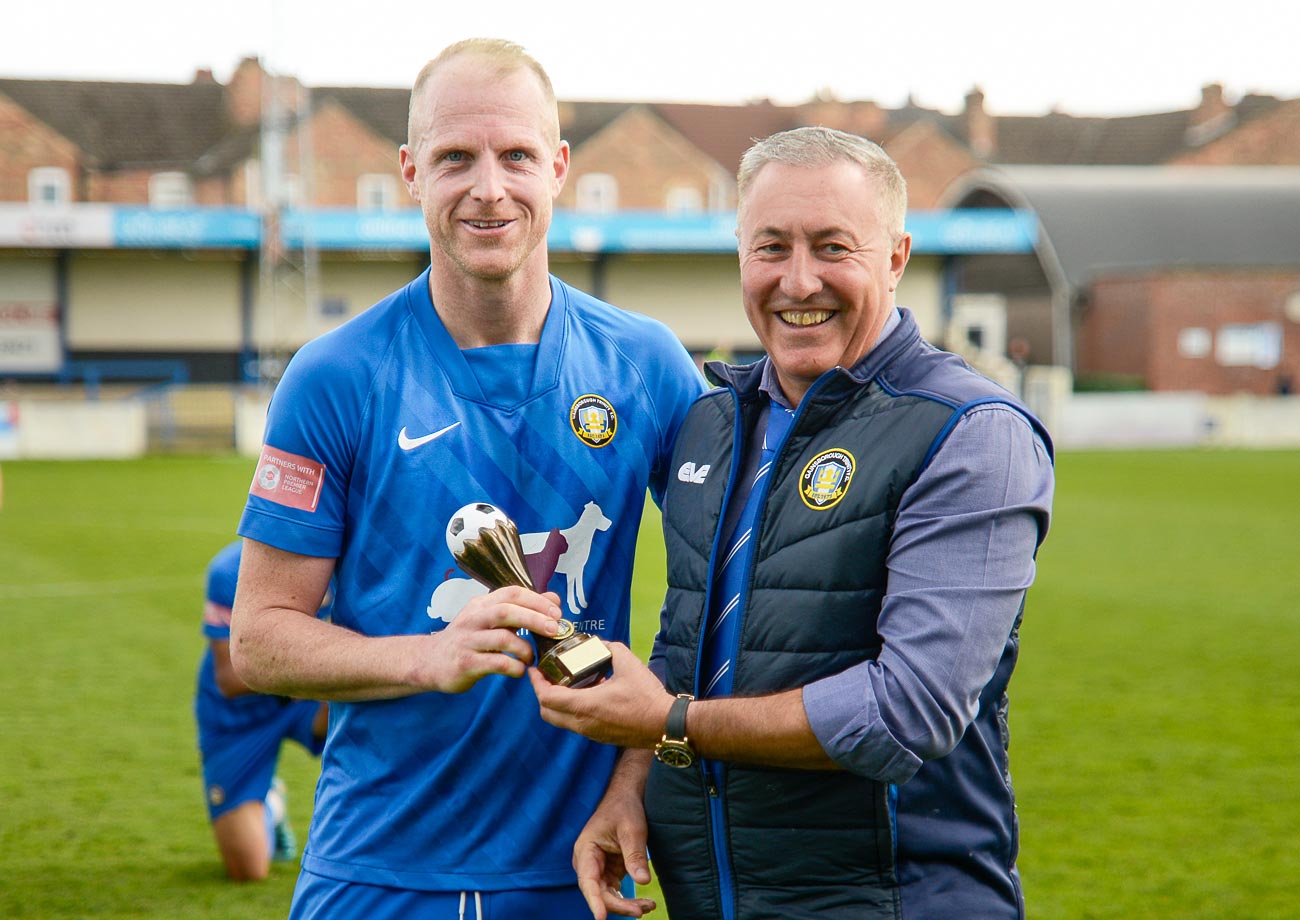 "I have thoroughly enjoyed this season at Gainsborough. It was an honour to receive the awards and I can’t thank the players, staff and fans enough for them. It’s been a fantastic group to work with and I feel we have really gelled the more the season has gone on and that has reflected in the performances of the group."

In the squad for 38 games of the season, prior to being presented with his Directors’ Player of the Year award, Neal Bishop has demonstrated unreal fitness levels. At 40 years young, Bish has shown little sign of letting up as he has shown great dedication to the cause. Showing unreal fitness levels, Bishop h

as competed fiercely in central midfield and at centre half, providing a lending hand to the youthful players surrounding him. He won’t like me for saying it – but he has been a father figure to many of our youngsters, who all look up to him and the career he has and continues to have.

Combining playing with his role as First Team Coach, Bish was surprised to learn of his award: "Winning any end of season award is a privilege to win, I didn’t expect it, but it’s an honour to pick up the Directors’ Player of the Season. I’ve really enjoyed the season with a great group of lads. Hopefully we can take on what we have learnt as a group and take it forward and have a right good go next season."

Providing a real spark and creativity since linking up with the club in November, Jovon Makama has really caught the imagination of the Trinity faithful. So much so, he secured the Supporters’ Young Player of the Season. Scoring some fantastic goals, and tormenting defenders with his direct running, trickery and eye for the spectacular, compared in some quarters to a young Nwankwo Kanu, Makama who only turned eighteen late in the season, promises to have a great future in the game, if he continues to work as hard as he has, a lot higher than he has plied his trade this season. I am certain that many Trinity supporters will be hoping he returns to the Gainsborough Martin and Co Arena next season – and if he doesn’t they’ll be sure to watch his progress, with interest.

Currently Brad Grayson leads the goal scoring charts with eight to his name, with a game left to play. Unfortunately for Grayson, he is suspended for the final game having been red carded in Rossington Main's Play-Off Semi Final last Saturday, whilst dual registered. Jovon Makama (7) and Toby Gould (6) will be looking to chase down Grayson's target against Whitby next time out, to claim the Top Scorer award.

We will also run a Goal of the Season Competition at the end of the campaign, in case we have any more crackers to add to the shortlist after the Whitby game.